The Deep Down (Lifting DDT before rolling into a Guillotine Choke on a sitting opponent): 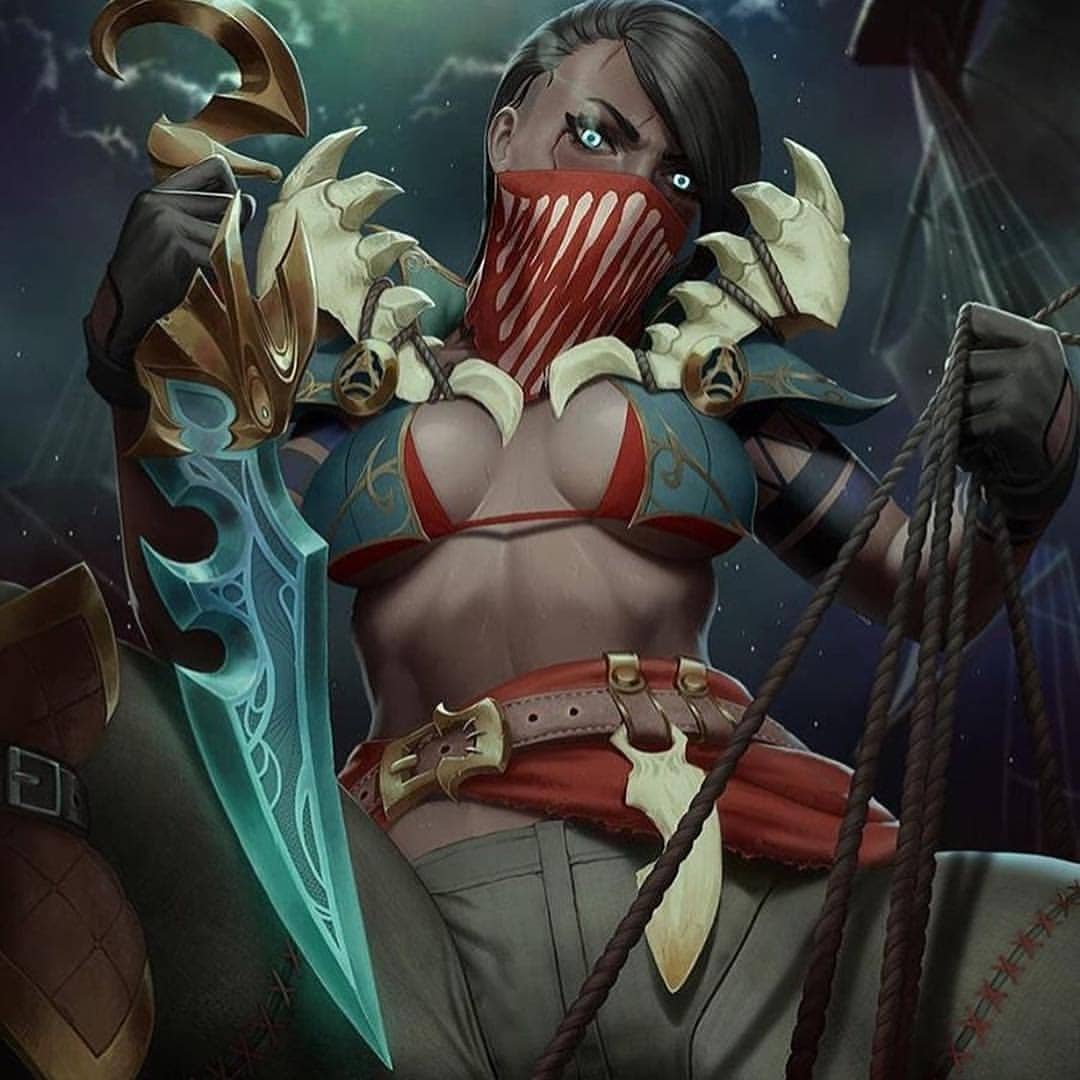 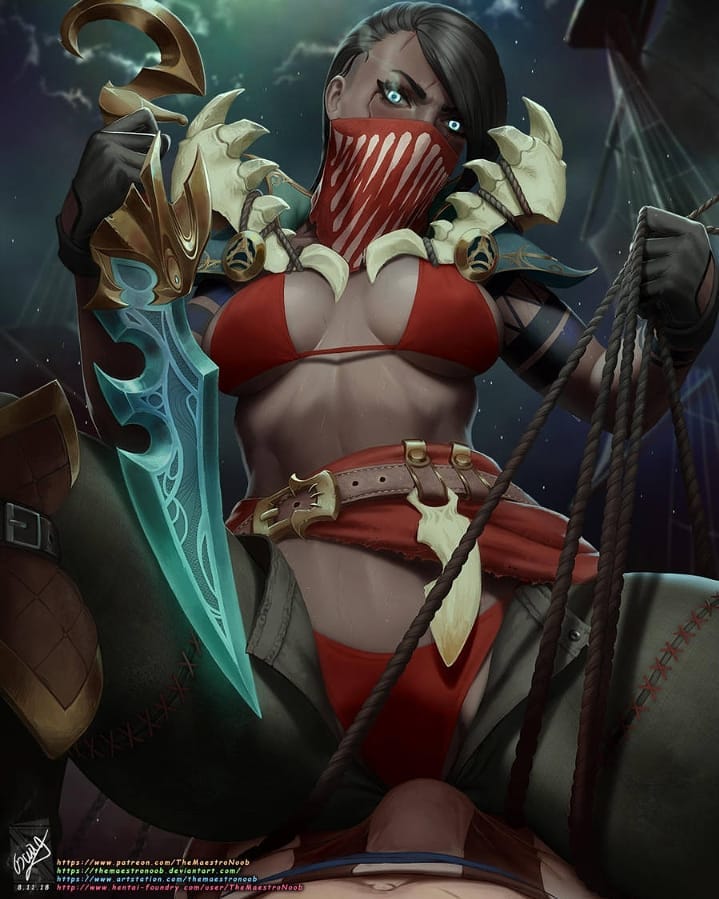 Visual Appearance: Oh god she's scary. Pyke is just a scary woman who should not been approached in the dark. Her blue eyes look as if they're staring into people's souls. Besides that, she's kinda hot. However, people tend to miss that while she's gutting fish or making sculptors out of bones. Her body is rather well built, while having various scars from her rough upbringing.

Personality: Most don't like to pry since this bitch is crazy scary. Pyke is mostly cryptic, and she's also demented. One thing she's most known for is how she seems to enjoy freaking people out. Pyke gets a kick out of making people uncomfortable too. She seems to hate it when people are too at ease. In fact, even when she's not involved in a conversation, Pyke will insert herself in it by tackling someone in the group. This is just to disrupt the natural order of things, not because she's envious of people having a normal life. However, she does seem to be lonely at times and will actually try to fit in on a rare occasion. Her strongest personality trait is how she never lets go. For instance, she liked a gym. So now...she lives in it. Security has kicked her out three times...but stopped being able to try for a forth time since sshe injured them all by that point.

The Pyke family has a long, infamous history in wrestling. The first was known simply in the ring as Pyke. He was a cruel man who enjoyed dismantling his opponents. Years went by before the man retired from his many injuries. He had been fighting in illegal brawls as well as in the ring, and his violent tendency’s left him unable to walk in his old age. Pyke would not truly die, though. Eventually, years after disappearing, another arrived with this infamous name. The man appeared to be the very same, only younger. The old Pyke’s legacy lived on through this new Pyke, before tragedy struck.

Pyke had purposely injured a young fighter, the son of the current champ in fact. So The champion and Pyke faced off in a brutal match. One set in the ocean itself. A ship would take the two out to sea where they’d battle on a raft. However, no recording was ever made of it due to a terrible storm. However, the two men continued their fight, even as the sea itself raged around them. Eventually the ship capsized, and the large raft broke off. The champion and crew would escape thanks to the coast guard, but Pyke refused to leave. It is said that the mad man laughed at the champion for running away. Believing that by leaving the raft he would be forfeiting, Pyke remained remained at sea as the storm grew worse and worse. Eventually the rescuers had to leave in fear that their own vessel would capsize.

This was the last time anyone saw Pyke.

The aftermath was a media frenzy. Many blamed the promotion for Pyke’s death. Law officials were swarming, however, no one knew who the man’s next of kin were. It took a month before anyone learned of Pyke’s origins. It turned out that both of the “Pykes” were from a fishing village in Greenland. The town itself was called “Mistmouth”, and no one in the town told the officials anything. From what could be gathered, the original Pyke was long dead. Also, the town folk were not to be trusted. Only a few sources from other towns could give any information. They said that the town was more of a cult than a mere fishing village.

Eventually the officials gave up on identifying Pyke, and the media coverage faded. After a few more years the promotion went under before being bought and renamed. However, the new promotion found a familiar face at their doors. Pyke had returned. And SHE was not happy it seemed. Apparently this woman had been sending letters to the promotion. None of which were received, though, because of the new name.

Later, when the letters were found, it was revealed that she was taking her ‘father’s’ place int he promotion. She’d earned the right to be Pyke from her brothers, and now she wanted to pick up where her ‘father’ left off. Now while it was impossible to confirm any of her story, she could never join anyway. The promotion only had a men’s division. This infuriated the woman, and she nearly needed to be taken away by police.

It was clear that Pyke would never back down, though. Soon she was looking to join other promotions across Japan. Many feared the publicity fire storm if they hired her, but only one looked past it entirely. The promotion known as AFW saw Pyke as a ghost story turned real. They quickly signed the woman, not caring about her true identity. Pyke had odd demands, though. She didn’t care about money, healthcare, or even vacation time. What she wanted was a half dozen sea shells, four hundred shark teeth, and a katana. Despite being confused, AFW gave her those things and signed her. She would still be get paid, get health care, and get vacation time. However, Pyke seemed to only care about her own demands. Little did AFW know that Pyke only signed things with bloody hand prints. Now, as an official member, it seemed that the woman’s quirks were just getting started…

Claims she has six half sisters and three half brothers

Is living inside the Friction gym building. Pyke found a large space between the walls, and the rest is security’s problem, because she’s not leaving. (She also has a summer house inside an arena.)

The ocean is her favorite place to be. Pyke has been removed from the beach many times, though, as she sleeps their overnight and has beaten up three life guards.

Pyke hates the heat. She would much rather be naked in the snow than be hot in the sun.

Loves her bandana...it's from her father...