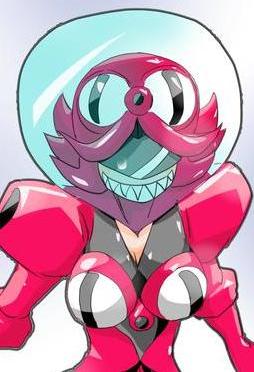 Strategy: Entrapping her foes in her vile clutches is what this Inkvader’s goal seems to be. Once she gets her prey tangled up, there is to way she will let go as she tears any do-gooders apart with her powerful strikes and corrosive charisma!
Style: Nefarious

Spoiler:
Having to wear a heavy suit constantly while keeping up a villainous character built up Hikari’s endurance quiet a bit. Training as a stuntwoman helped out a bit as well.

Spoiler:
Decent strikes, tight holds, and all of it paired up with a vicious grip! Once she latches her tentacles onto her prey, she won’t let it swim away!

Spoiler:
Only speedy when going downhill, Tako can usually maintain a presence in the arena…but struggles to move the presence in any real way. Her reach is her main asset in most brawls.

Spoiler:
Thanks to some basic experiences with impacts and the padding in her costume, Tako can take a number of strikes and throws.

Spoiler:
Basic combat experience and improve acting abilities have earned the vile monster a pretty decent understanding of how to win against a do-gooder.

Octopus Ink Attack! - When caught in a tight spot, Tako will make a hasty retreat. If her opponent happens to catch her, and the move was prepared beforehand, Tako will spin around and spit ink into their face, blinding them for a counter attack or freeing her for a clean getaway.

Octopus Embrace! - A simple, but effective Octopus hold! Tako seems to excel in this attack for obvious reasons, and is probably her strongest attack.

Tentakill! - Upon dazing her prey at just the right moment, Tako will move in and envelop her prey in her arms! Once everything is nice and snug, and all hope for escape is lost, Tako puts in everything she has so that she can squeeze down on her foe in a violent cuddle that is sure to leave them breathless! 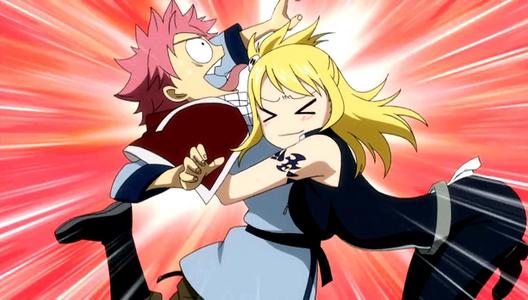 Appearance:
Never seen without her outfit on in the AFW, it is a bit difficult to discern what Tako actually looks like. Due to her costume covering up most of her body, it is difficult to get an idea of build or muscles mass on her, though she seems to be able to do quite well in most matches. She is very clearly hooked on her gimmick, with her outfit obviously inspired by an octopus. Few can really describe her appearance as anything other than extreme.

Loud, boorish, and extremely overconfident. Toka is a rather cocky individual that thinks second guessing her own plans or tactics is a waste of time and resources. If it seems like her plan will work the first time, then why put any other thought into it? Debating is pointless when there is a threat standing right in front of you, and Toka isn’t one to let a threat go about unpunished. Whether is with flare or whatever subtlety she can muster up, Toka’s penchant for maniacal misdeeds will sure to cause an interesting, if somewhat unorthodox battle.

Past/History:
Hikari Hinata was always close to the sea. Being born on an island, there was little one could really do other then head out towards the long, spanning shores of sand and play about in the salty sea or climb the large sand mountains that formed in the area. Every day, like clockwork, Hikari would go out to the shore and find something new to do or discover. She found dozens and dozens of washed up sea critters, debris, and hidden treasures that only the sea could provide.

As the years ticked on and on, Hikari went to school and grew up with a relatively normal life. Soon, she graduated high school and actually went of to school to learn about creating things. She wanted to be a costume designer for movies, creating outfits of all shapes and sizes that would be seen on television and lauded by all. She actually did quite well in her classes, and passed each one with relatively high marks. Soon, she would actually land her dream job, and go on to create costumes and clothes for television.

At first, she was satisfied. She created things like uniforms for fake companies in the script, recycled older outfits to make something new and save on the budget, or even make the day-to-day clothes of the characters in the show. It was all okay, and she was making money off doing what she loved, but soon she found her assignments boring, dull even. What was the point of creating as shirt that looked just like any other shirt? It was unimaginative and boring. Soon, Hikari would desire something a bit more “out there” in terms of costume design.

And that opportunity would come in the form of the “Sentai” genre. Hikari would be transferred from the more drama centric shows over to a kid friendly network, where she designed multiple costumes for the television series Neko Sentai Go Go! and it’s spinoff Neko Sentai Battle Justice X which was a slightly more mature version of the previous show. She was mostly in charge of creating the hero costumes or maybe the odd minion or two…but one in a while, she got the chance to design and create a monster! Though the show called them “Droni’s”, Hikari was ecstatic to create these creatures. They were so strange and alien, designing the outfits were totally new to what she had been doing previously. Eventually, she began to desire trying a few of the monster suits out.

That desire soon led to her to train to become a stunt woman. She did so in her spare time, taking classes on weekends while working on week days. It was actually quite a bit of fun, and after finally getting the proper training, she actually got to play as some of the Droni’s in the show! She got kicked, chopped, and blown up several times, but there were a few times she gave as much as she got.

The experience led to begin the construction of her own suit. Using her love for the ocean as inspiration (as well as a favorite anime she had begun to watch), she created the evil Droni persona Tako Musume! Hell bent on making the surface dwellers bend there knees in servitude to the mighty creatures of the deep! She herself would soon dawn the suit in promotional live action hero shows that were often found at theme parks or other attractions, with the vile but comical Tako turning out to be rather popular with children. The Droni would never make an appearance on the television show, but would actually become something of a local mascot for a couple of the shops, with Hikari popping in every so often in costume for some fun banter and quick scares.

Eventually, she would be set aside for a special assignment. The producers of Neko Sentai X had made a brand deal with a local wrestling federation, the AFW. it was relatively simple deal. The hero show would send a couple of stage hands and stuntmen to work for AFW part time while paying full wages and getting a few matches thrown there way for free advertisement. The AFW would reciprocate by sending a few of its talents to play Dronis, villains, or other side characters as needed, with a special credit in the end. Since Hikari had experience in taking hits, a costume, and her character seemed to be adored, they decided to send her off to participate in the federation.

Now, set on a much grander stage, the terrifying Tako Musume rages her battle against the surface dwellers with a much larger audience then ever before. Some support her callous conquest, while there are those ready and willing to stop her…but can they out maneuver her terrible tentacles?

I’ll show you all what fear Gilly looks like!

Attire:
Since working with AFW, Tako will take off her octopus gloves during combat. She wears matching fingerless gloves underneath the fake appendages. 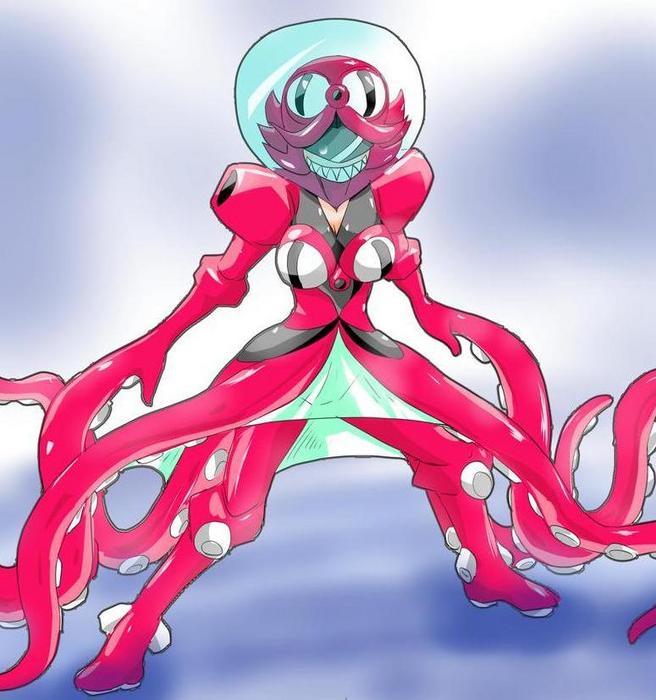 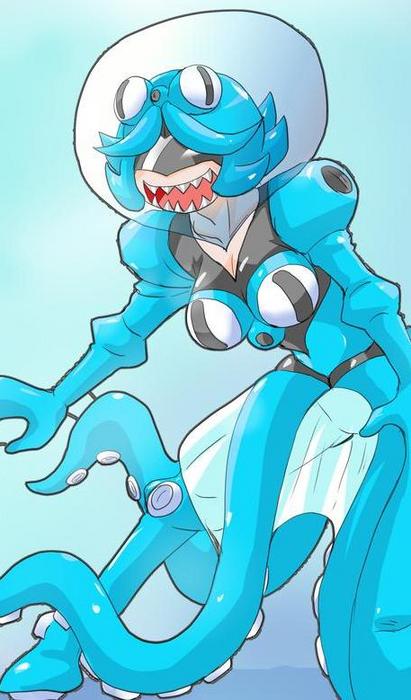 Dedicated to the Gimmick- Yes, Tako spouts off sea puns.

Naughty Tentacles- Tako’s spare tentacles have a habit of finding their way into compromising positions, giving her a slightly dirtier reputation then she actually deserves.

Ink Pouch- The ink Tako sprays from her mouth is easily washed off with warm water. The purpose is so that she can make sure not to stain her outfit or teeth, due to her constant use of the attack.

Home Sweet Home- Tako’s favorite place to be is a warm, sandy beach with the sounds of the ocean gently rolling over the atmosphere.

Colored Camouflage- Tako still participates in sea side Sentai/hero plays held nearby her home. She enjoys the role, and volunteers to play a myriad of different positions as either the villain, a minion, or the victim of a villains plan.

1. Making her villainous debut, Tako Musume faces of against AFW's newest and brightest hero ever, Mika Kaminashi! (Ongoing)
2. Taking some time off for her other job, Tako finds her acting crew short one hero! Will they be able to find a replacement? And who is that cute cheerleader in the crowd?
_________________
Tarantulust's Lair