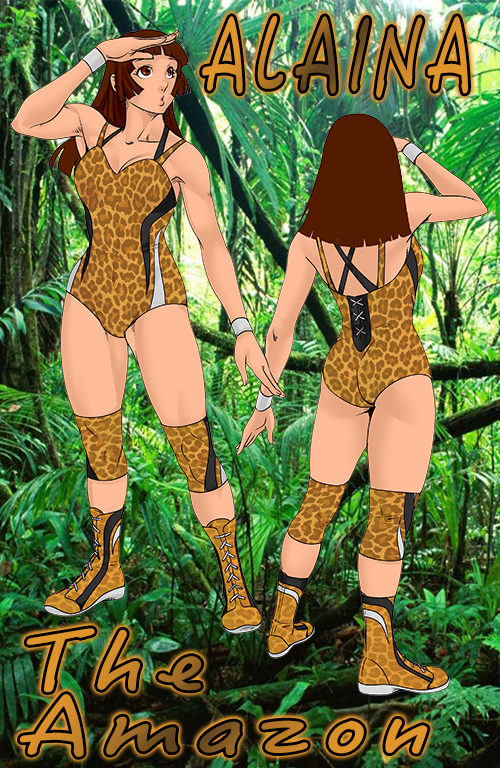 Match Type: Last Women Standing
Winning Condition: The wrestler who is able to knock down their opponent for the count of 10 is declared the winner
_________________
The new and improved: Kelsea's Karacters

Alaina was confident, she felt ready. She knew she could do this. She defended her old entropy title against the same woman in the same type of match. She was determined to make history repeat itself. This was going to be her night to be back on top of the world. She would have gold around her waist again. Clad in her leopard print one piece swimsuit with matching boots and kneepads she was going to smash Jessica into unconsciousness once more.

Once her music began to play the amazon came out, holding her arms out as she smiled to the fans. She waved, blew a couple kisses and strut down the ramp. She swayed her hips and high fived some fans while she made her way down the ramp. Jessica was vile, Jessica was strong, Jessica was a tenacious bitch. In many ways she reminded Alaina of her younger evil twin. Well, if twins could be younger.

Alaina climbed into the ring, stopping to strike a couple poses after climbing through the ropes, playing to the crowd she was all smiles as she waited for Jessica Wright and that hardcore title to appear. She could already see it around her waist, vowing to be a champion again no matter what it took tonight.
_________________
"The Amazon" Alaina Sanders-Friction
Danika Gorski-Friction(Inactive)
"Gnarly" Charlie Haines-Tension(Retired)
Suzumi Ishikawa "The Tsunami"-Friction
Peggy McIntyre-Friction
Hikaru Sawazaki-Friction
Rosa "Crusher" Cabrera

Jessica rocked from side to side. It had taken her whole life to get here. She had wrestled her way through the Midwest, through Japan, and now she was here. At the mountain top. For as long as she could remember, she had only had one goal. Get the belt. Hold on to the belt. By any means necessary. She had let relationships atrophy, she had done terrible things, she had become a monster. But she had the belt. At the end of the day, she had a glistening belt around her waist, and everything else was noise. There was only her, and the belt, in the cold loneliness of her lockerroom. One of the worker bees tried to turn the lights on, but her barking at him was enough to disabuse him of that plan for good.

But she could not let herself rest more. No. Tonight she would be going against Alaina Sanders. Alaina. Sanders. The same woman who had beaten her when Jessica had her first shot at a belt. In the same sort of match type where Jessica had lost. There would be a lot on the line tonight, and Jessica knew that better than anyone. The belt. Pride. Glory. Jessica made her way to the staging area and waited. There would be no cheers for her, no warm acceptance of who she was. That was how Jessica got the belt. By being the most brutal, vicious woman in the ring at all times. And they did not love her for that.

But they didn't have to. Jessica's music played over the loudspeakers, and just as she through she was met by a hailstorm of boos. She flipped them all off. None of them mattered. She was the one who had the belt around her waist, and as long as her eyes were open that was going to keep happening. She strode down to the ring with her shoulders back and her head high. The Violent Violet wanted to give off a look of sheer confidence.

She stepped into the ring, and ignored the ref at first when she requested the belt. Jessica ran her fingers across it and looked at Alaina. "Is this worth dying for?" She asked.
_________________
My Characters

Alaina watched as Jessica came out, knowing full well what she was capable of. In Alaina's mind she had gotten better since their last battle so she knew Jessica had to have improved just as much. Alaina was not going to let Jessica have an easy battle, and the amazon was all-in on getting gold back around her waist. As Alaina saw Jessica get in the ring and pose with the belt she smiled at Jessica as she attempted to intimidate Alaina.

"Always so dramatic. No one is dying tonight my dear however that belt is worth knocking you out for. Again." Alaina said as she confidently stepped up towards the center of the ring, more than ready for the match to begin. Once the bell rang the amazon would waste no time whatsoever in lunging at Jessica trying to grab hold of her and begin the match by ramming her knee into Jessica's sternum as hard as she could!
_________________
"The Amazon" Alaina Sanders-Friction
Danika Gorski-Friction(Inactive)
"Gnarly" Charlie Haines-Tension(Retired)
Suzumi Ishikawa "The Tsunami"-Friction
Peggy McIntyre-Friction
Hikaru Sawazaki-Friction
Rosa "Crusher" Cabrera

Jessica looked across the ring at Alaina. She was so young looking, even after all the time she spent in the ring. Jessica looked fairly young as well, all things considered, but she had been around long enough to know what was at stake. As she handed her belt to the referee, she reflected. Would she really die to try and get the belt? Maybe. But she was more than sure that she would kill for it. A sneer appeared on her face as Alaina shot back. No, this woman was not ready. Even though Alaina had beaten her. Even though Alaina had quite the legacy of her own. The Amazon did not want it as much as she did, Jessica had decided, and she was going to punish her for that.

The second that the bell rang, Alaina was upon her. She let Alaina get her hands on her shoulder and drive her top half down. Instead of acquiescing to the knee to the sternum, driving forward with a takedown. Her reflexes would have to be fast, but Jessica thought she was more than up to it. Especially with Alaina only on one foot and off balance...
_________________
My Characters

Alaina lunged in and paid for going too hard too fast! While her knee made contact it wasn't in the way she had hoped as Jessica managed to take her down hard! "Oomph!" Alaina groaned as she was on her back with Jessica on top of her! She tried to salvage her position by using her legs to wrap around Jessica's torso to put her in a tight body scissor hold! Whatever Jessica had planned on doing would be tougher and punishing to her as Alaina used all the power she had in her lower body to put a hard squeeze on Jessica! She was going to make Jessica go through hell before taking that lovely hardcore title of hers...
_________________
"The Amazon" Alaina Sanders-Friction
Danika Gorski-Friction(Inactive)
"Gnarly" Charlie Haines-Tension(Retired)
Suzumi Ishikawa "The Tsunami"-Friction
Peggy McIntyre-Friction
Hikaru Sawazaki-Friction
Rosa "Crusher" Cabrera

Over her time in the ring, Jessica had developed an impeccable sense of timing. That helped her out, but her fearlessness was on display now. The Violent Violet knew that even a second's hesitation or a misplaced hand would lead to her getting kneed in the chest by a very strong woman, and that was not the right way to start off the title match. But luckily enough, she had thrown Alaina down to the mat, and was now in a dominant position.

Alaina was not one to let the good position linger for long, however, and quickly wrapped her strong legs around Jessica. She grunted under the awesome pressure that Alaina could give. But she did not let it last long. She grabbed at Alaina's hands so that the Amazon could not wiggle away, and attempted to stand on her two feet. If she had the oxygen, she would have said something like "Have it your way," but instead she would have to live with slamming the woman down to the mat.
_________________
My Characters

Alaina groaned as she was lift up into the air, Jessica gripping her tightly. Alaina then flew to the mat crashing hard onto her back! She moaned and grit her teeth, knowing that she had to try to improve her position somehow. She was already behind, in a bad spot complete with an achy back already. Alaina tried to roll to her side and swing her legs around in an attempt to sweep the legs of Jessica out from underneath her! It wasn't the most glamorous thing or the most painful but if she could take Jessica off her feet it meant that Alaina could scramble back up to a vertical base first.
_________________
"The Amazon" Alaina Sanders-Friction
Danika Gorski-Friction(Inactive)
"Gnarly" Charlie Haines-Tension(Retired)
Suzumi Ishikawa "The Tsunami"-Friction
Peggy McIntyre-Friction
Hikaru Sawazaki-Friction
Rosa "Crusher" Cabrera

Jessica was in the better situation right now. She had slammed Alaina to the mat with tremendous force and now was in a position to enact more violence, something that was vital in a match such as this. But before she had a chance to execute on the litany of terrible moves on her opponent, Alaina burst through. Two quick legs lashed out and soon Jessica found herself with her rear firmly planted on the mat, wincing with the pain that such a sudden move brought.

But she would not be out of the fight for long. She rolled over the back to gain herself some distance from her opponent and then rose to her feet. The Violent Violet felt good about the first exchange, but fortunes had a tendency to change rapidly. She eyed Alaina. "How big is your casket going to be?" She taunted.
_________________
My Characters

Alaina got to her feet, rising up as Jessica did. She knew she wanted to keep hammering away at Jessica but she also wanted to be smart about it.

"You need to stop getting ahead of yourself dearie." Alaina said before moving in trying to lash out with a fast toe kick to the abdomen followed by a big uppercut to the jaw!