Strategy: Selunelia miss in a variety of spells to overwhelm and bring down her opponents. She knows many, but in order to prevent any fatalities she limits herself to a select few kinetic and elemental spells. She is not however reliant on them, and is capable of defending herself without magic.
Style: Strikes/Submissions
Type: Offensive

Signatures:
-Drain: Selunelia's favorite type of spell is Drain, which when any part of her body is touching her opponent, she slowly drains the energy from them. It works anywhere, however her personal favorite way to use it is with a seductive kiss. 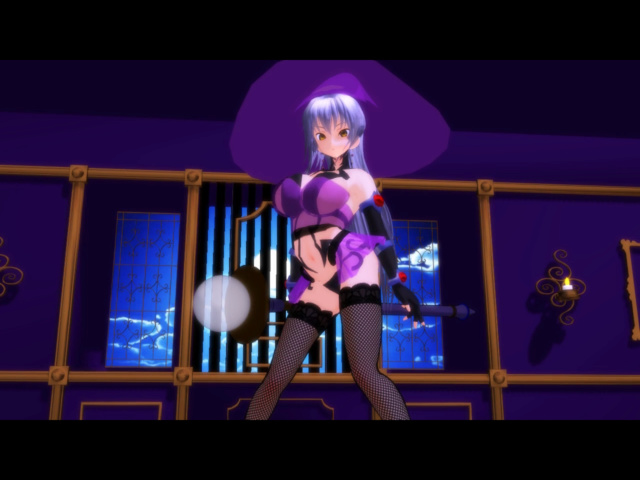 Personality: Selunelia is a youthful and explorative witch, with an active desire to research and discover more types of magic in the world. She approaches challenges with a smile and welcomes the effort, although she rarely finds one given her knowledge and experience.

History: Selunelia grew up in the outskirts of a small village, and due to the nature of her being a witch never knew her parents. This however didn't even bother her, as she learned quickly of her natural talent with magic. Due to her young age, she had quickly picked up on most forms of modern magic, however her real goal is to discover the secrets of ancient magic.

In order to discover these secrets, she requires a large amount of power. And for awhile, she had been using the monsters that inhabit the area outside of the village to feed her strength, slowly building her power up in order to further her research. However she recently hit a roadblock, as the monster population had diminished as a result of her gathering.

Needing to gather more power, Selunelia had searched for a new source of energy, which brought her to the AFW. She isn't looking for a constant set of battles, but for proper opponents that could potentially further her power and allow her to discover the lost arts of ancient magic.

Fun Facts:
-Selunelia knows over 400 different types of spells, however can only use around 20 to avoid lethal blows.
-Her home is a cabin in the woods, secluded from the village and hidden by a barrier that normal humans can't see or pass through.
-She usually works alone, however she has two known bodyguards, Shisen and Astride.
-Shisen was Selunelia's latest and most successful attempt at creating a human appearing demon, one that was loyal and could protect her should her focus be elsewhere.
-Astride is Selunelia's enforcer, keeping a close eye on any intruders and containing them should they attempt to break free.