Strategies:
Practice made perfect, or close to it. Morgan’s offensive strategies are focused on improvising inescapable holds to slowly and methodically wear down an opponent. Chaining in between holds, she looks to keep opponents reacting to her rather than her having to react to her opponents. The magic behind her strategy is understanding the psychology of reaction and dedicated practice to keeping the act going. In practice, she makes her sparring partners to rehearse every possible counter to try and stay on top. The same applies to her defense. As a previous escape artist, she has continued the tradition of practicing escape routines from different holds or problematic scenarios.

Stats:
Due to small size and stature, Morgan is certainly not going to physical dominate any competition. Her reliance is on rehearsed skill and a quick mind to try and keep on top of things. Although don’t doubt her ability to hang in there with the best of them. She is incredibly flexible with a high tolerance to bend before breaking and considers submissions just another escape trick, something she’ll get out of eventually. 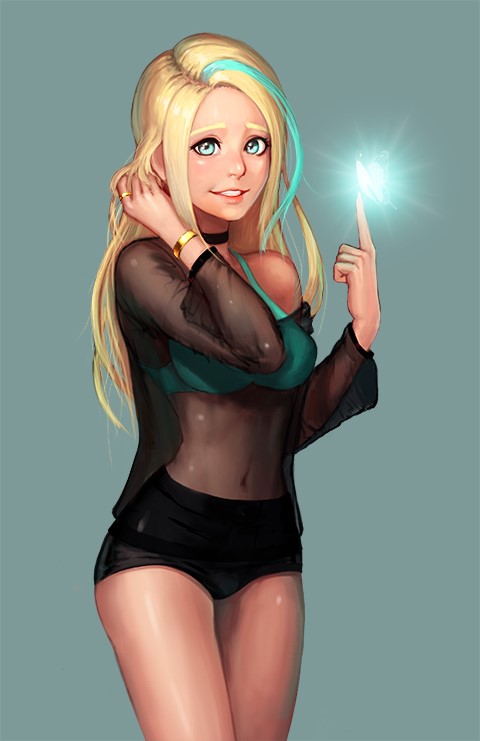 Personality:
One for the limelight, Morgan feels a sense of prosperity while on stage with any type of performance. She is bold and motivated to be remarkable and impress people to the point where she is hungry with ambition. Her onstage attitude is benevolent and excitable that just seems to appeal and charm people with a spell of intoxication. People always say it is difficult to hate such a cheery individual. In reality, Morgan maintains similar personality quirks but they are for more muted.

Background:
Any showman must have a good story and Morgan’s is a tale spun to make herself sound more mysterious. She is the child of the famous Pendragon magician duo and with that has been gifted with the natural talent of magic and illusions. Even as a baby, Morgan was disappeared, levitated, and performed all manner of illusions under her parents’ talented routine. With being born in the spotlight, it has only driven Morgan’s appetite to thrive in that spotlight.

As a young girl, she pursued performances in dance, music, and singing in addition to being the assistant to her parents’ routine. She discovered through her time performing that nothing quite had the thrill like the escape artist routines she assisted with her even performed herself. Yet there was more out there Morgan knew she could try and saw that taking her love of escape artist maneuvers would best serve her in the business of wrestling. It was an idea, at least, and another challenge to take on while enjoying the limelight of adoring fans.