Strategy/Style: Perhaps a juxtaposition to most fighters in Tension, Eliza is perhaps considered the true epitome of grace and elegance in this league. With impressive speed, she uses swift and refined attacks at key moments, often very accurate on the correct part of the opponent's body to bring them to their knees. Sidestepping and deft evasion are often made use to those that are bigger and stronger than she is. Her dancing-trained legs are her main weapons, allowing her to make use of her explosive and acrobatic offence that would leave many wondering what just hit them. However, because her legs are often used, taking them out can drastically lower her chances of victory, although achieving such a task has proven difficult for many opponents. While her offence is as powerful and explosive, she is a literal glass cannon and can't afford to go into scrappy brawls.

Spoiler:
The rigours of dancing and wrestling has blessed her with a reservoir of stamina for her explosive offence. Experience over the years has served to toughen her up to better suit for battles ahead. She’s fairly well put together and can take a good strike or two before going down.

Spoiler:
Nothing too dangerous in her already athletic physique, save for her renowned pair of legs. She has better control over her center of mass, letting her launch powerful strikes with the right balance and know-how.

Spoiler:
Whilst she's as delicate as a flower and can't take too many hits, actually landing a blow on her is a vastly different story. Make no mistake, she's hard to hit. Blessed with quick reflexes and natural flexibility that’s been further improved by her dancing background, she can twist and bend around a wide range of attacks with ease from all but the elite of strikers. Getting your mitts around her is hard enough with her small and light frame, and that's without her putting up a fight in between.

Spoiler:
Eliza's greatest strength both outside and inside AFW. Blessed with strong legs, she can run, roll, bob, weave, backflip, forward flip, somersault, and just generally bounce all over the ring. Allow her to gain enough momentum, and she practically becomes a blur, which is perilous for the opponent once her kicks are added into the equation.

Spoiler:
One would be surprised to learn that she hasn't taken any formal martial arts training. Experience has proven to be the greatest teacher and she now has a strong, yet balanced enough variety of moves to choose from. There is no angle she can't attack her opponent in the ring from, thanks to her flexibility and strong legs; relatively few moves she isn't capable of performing, at least in some way.

Spoiler:
Creating a hybrid style tailored to her strengths, Eliza is surprisingly creative with what she can do. She seamlessly integrates her dancing training with her elegant, refined way of fighting, letting her launch kicks from almost any angle with frightening speed.

Spoiler:
The power in her legs alone should be feared, one move in particular, that to this day puts fear into the hearts of many, can constrict an opponent with unyielding pressure to inflict as much pain as possible. Her flexibility grants her more options, though she uses submission holds rather conservatively, more as a chance to break from her explosive offence.

Spoiler:
If only she could lift someone up with her legs. One could dream.

Spoiler:
The other half of her explosive offence. A natural-born acrobat, Eliza can leap and flip from just about any surface. She’s a graceful flyer with moves that captivate the audience...and bring danger to her opponents.

Spoiler:
Evades strikes with minimal effort, punishing foes just as easily. Keeping her down is an even taller order. It’s way too common for her to bait someone into a waiting strike. The bigger the opponent, the easier this becomes.

Spoiler:
Eliza will kick her opponent square in the belly and takes a step back before her leg up high and then sends it down onto the back of their head while they are bent over.

Spoiler:
Eliza kicks her foe in the back of their legs to force them to one knee. With the same leg, she spins around and strikes their forehead with her heel

Spoiler:
This spectacular move begins with Eliza locking her foe into a normal headscissor facing away from their body. She will then begin to roll around while keeping the pressure on their neck. The opponent will be dealing with dizziness as well as the constant vice-like pressure crushing them, forcing them to either yield the battle or pass out. 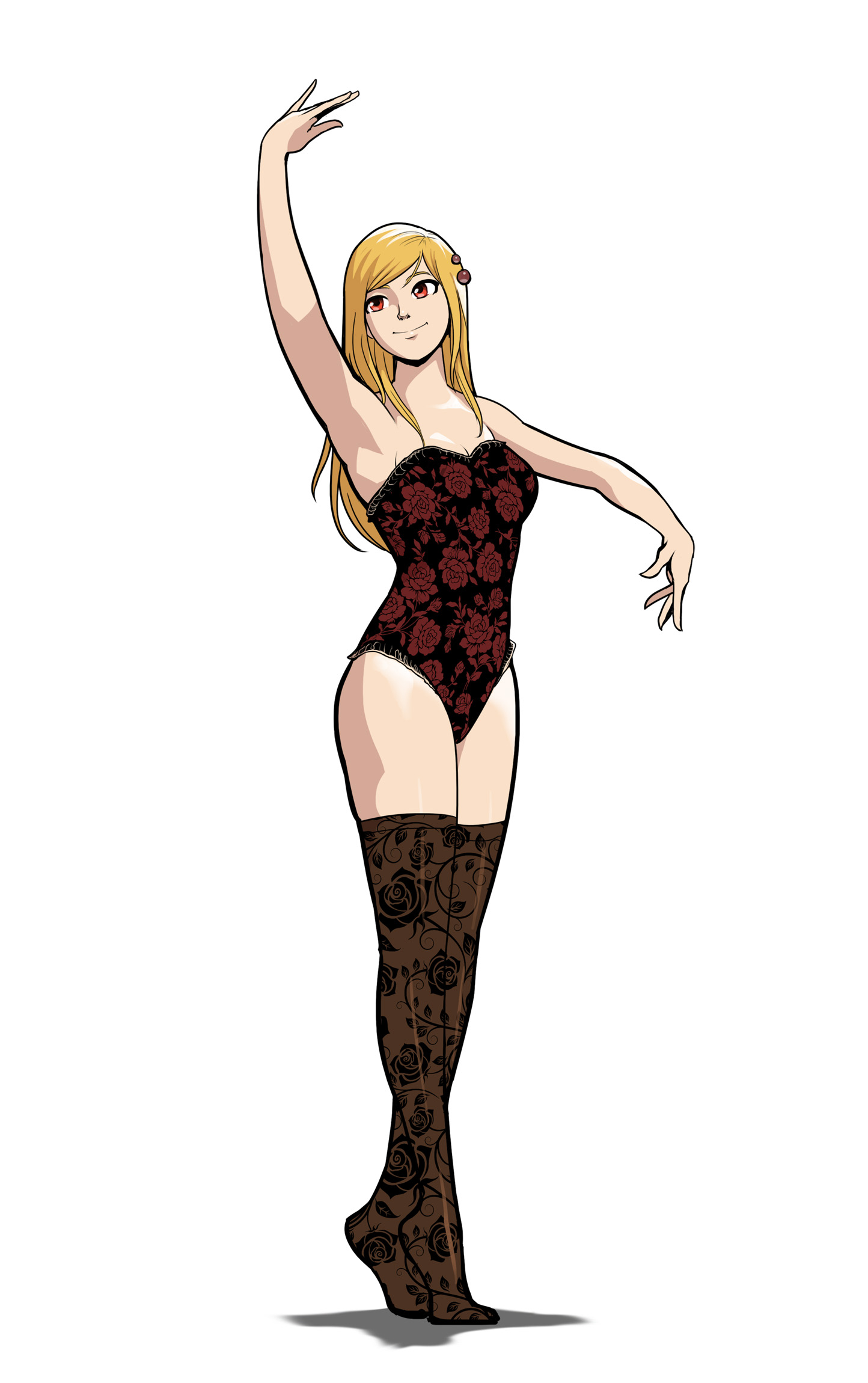 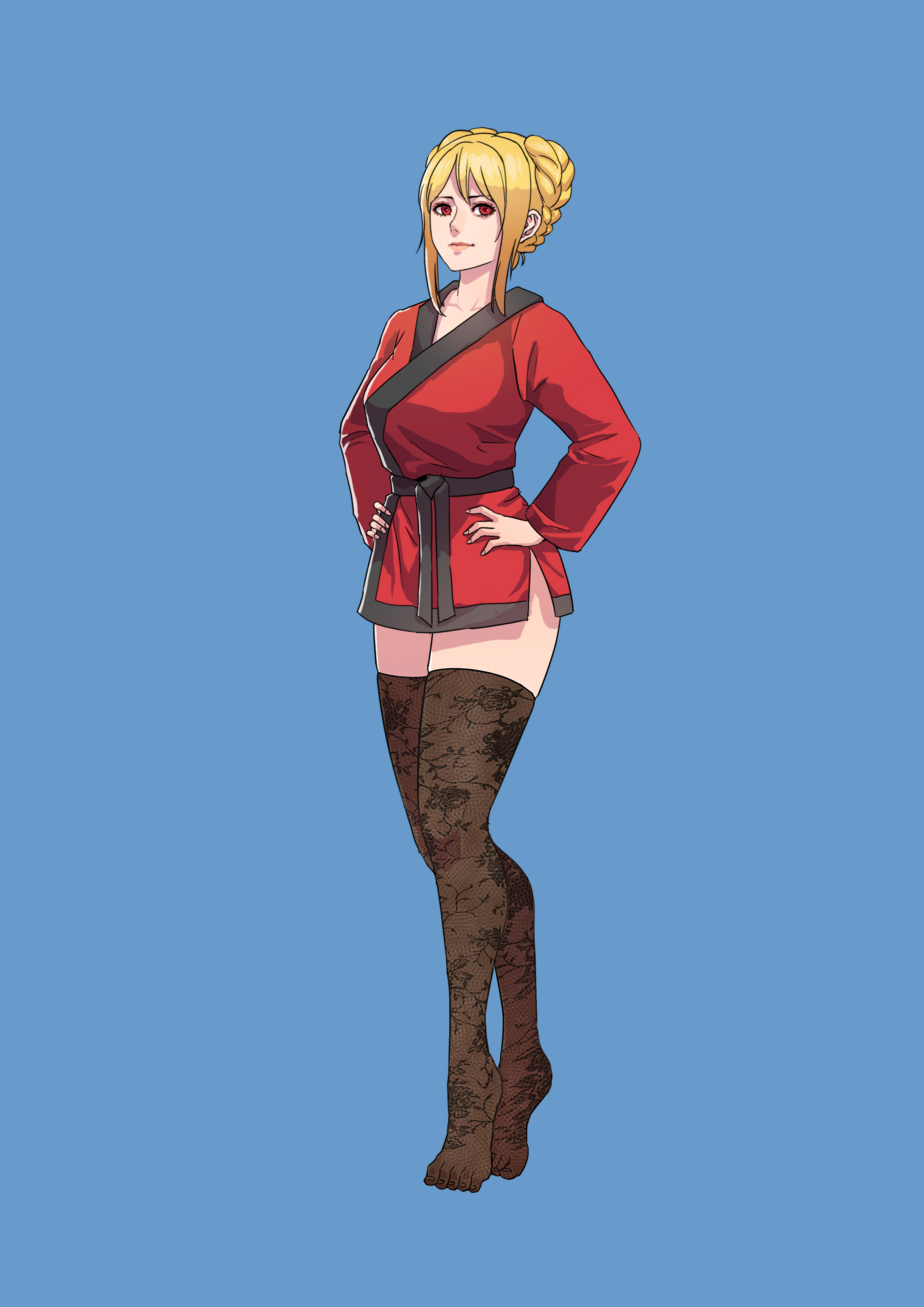 In particular, she admired the diva wrestlers, but she never thought she could become a wrestler herself. After all, she was a dancing noble, and of course, there were the ballroom social meetings as well. Although Eliza had won the hearts of several men, none ever really interested her. Almost as if she could never connect to them.

That is until she met Ryan Knight, a 17-year-old in attendance on a particular evening after her 18th birthday. Eliza could feel his energy, his delicate nature combined with his passion in everything he applied himself to was something that none of the other men she danced with displayed. She knew she had to meet this young man again, and the two formed a relationship, and it would result in the pair of them losing their virginity. It lasted for a couple of months until Ryan had to announce to her that he must travel Asia with his family in tow, the two knew they had to end their relationship there else it would only cause more heart pain for them.

Fast forward to several months later, Eliza had reached her 19th birthday and began to wonder what she should do with herself. Her elder siblings were away doing courses in colleges in other countries, but she couldn't find herself interested in those things. Then one day she discovered Ryan Knight on an episode of Tension and her eyes went wide, that was the young man right there! She then decided on what she would do; she would join the female roster of Tension and perhaps meet him once again. She knew he'd moved on, and so had she, but he was a person she'd walk to the end of the world for. And besides, not only would the AFW be a place to earn a living for herself but she could perhaps even find a new love too!