Search
Latest topics
» Catching Up
by HighFly Today at 9:19 am

» Something Has To Give! Akane Saito vs. Lauren Fredericks
by HighFly Today at 9:15 am

» The Golden Goddess vs The Dirty Beast
by Jstruggs716 Today at 7:25 am 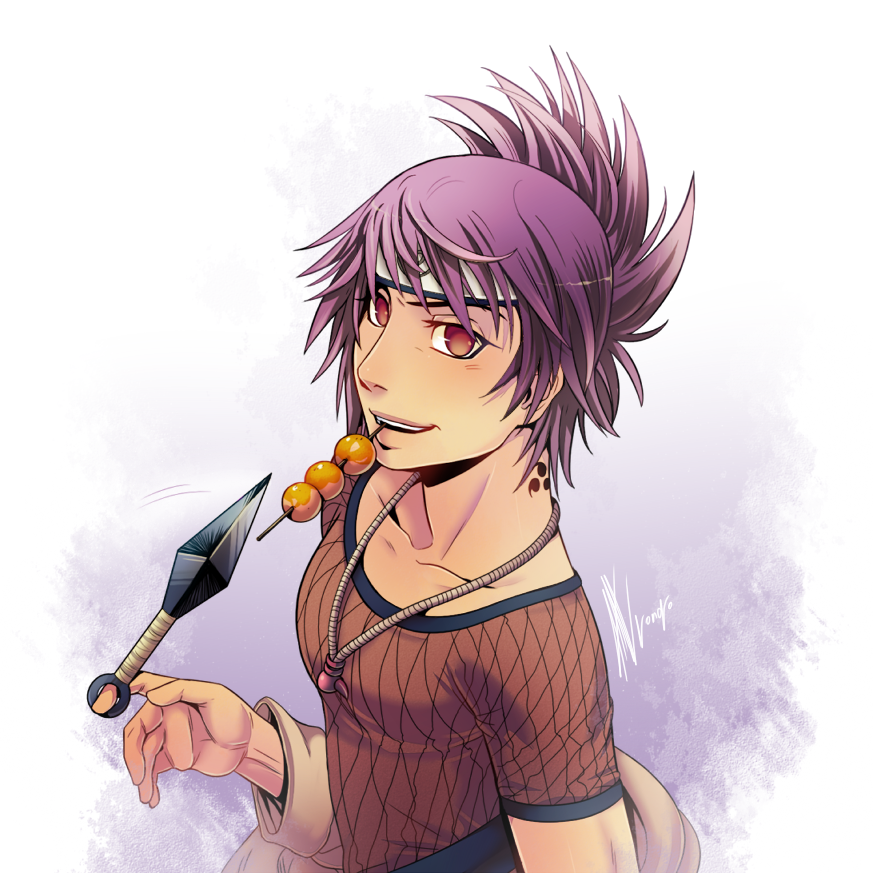 ______________________________________
Wrestling Information
______________________________________
Strategy: Fighting is never about competition for Yae. It’s about cheap thrills, laughs, the kind of satisfaction you can’t get anywhere else. Speed is at the center of her style. A ninja of her prowess can make use of the ring to attack from almost any angle, employing sneak attacks from seemingly out of nowhere. Her flashy and impressive acrobats keep her unpredictable and nimble. She aims for maximum damage, moving fast while hitting hard with aigle movements, confounding foes in a manner akin to predator and prey. While she’s capable of some brutal submission holds, she typically doesn't go this route until she’s intent on wrapping things up. She doesn't hold reservations about using underhanded tricks to gain the advantage either. Honor and victory aren’t a good mix.

Signature Moves:
Folding Doors - From a handstand position, Yae flips backward towards her opponent once, then twice, before locking her legs around their neck and throwing them forward in a high-momentum takedown that’s as disorienting to watch as it is dazzling.

Finishing Moves:
Ascending Koi - After building up speed, Yae leaps into a rapid forward spin in mid-air, rotating several times and steadily building momentum before she kicks her opponent squarely on the head with the bottom of her heel.

Breath of Light - Yae grabs her opponent by the neck and leaps forward to take them down in a faceplant. From this sitting position, she wraps her around her opponents neck and flips onto her back before lifting her feet, locking her opponent in a bridinging arm triangle choke.

Mamushi Mushin - Yae executes a series of shadow strikes on her opponent, utilizing the ropes of the wrestling ring to attack several times at an eye blink’s pace before they have a chance to drop.

Details:
Pain is part of the job and part of the fun. Yae can go on for quite a while, but she’s built more for speed and doesn't prefer drawn-out fights.

Details:
Strong for her size, but not very dense. Most of her power is packed into her legs and she’s fit enough to hold her own.

Details:
Capable in a fight, but she doesn't have many techniques for guarding or blocking attacks, especially power-oriented ones. Her formidable offense works acts as a cover for this weakness.

Details:
Trained seven days a week from a young age, has a knack for inflicting pain, and only grown better with years to experiment and experience on her own. Draws from passages of the Bansenshukai in her submission and striking skills, giving her deadly proficiency with the right intentions.

Details:
Hits on the run, employing rapid kicks at high and low angles that hit fast, attacking one’s posture more so than the body itself. Her fists don’t hit as hard, but strike at vital spots and pressure points with lightning precision.

Details:
Constricts and contorts with unyielding pressure to inflict as much or as little pain as needed. A trained and seasoned master of manipulation, she manipulate any body however she sees fit.

Details:
Remarkable agility. Often uses the ropes by ninja running along them for maneuverability, nimbly leaping away from danger, or striking at an unsuspecting foe from an angle.

Details:
Having eyes in the back of her head, a master shinobi reacts to danger without hesitation, reflecting blows with minimal movement. As expected from a former teacher in the art, punishing mistakes comes natural to her.

Somewhat mysterious and distant, she doesn't reveal much about herself despite how frequently she hits the town and willingly engages with others. She’s careful of what she exposes to others and is always gauging the room. As such, friends are few and far between with her. The only people she sees semi-regularly are the ones she knows are good for a laugh, whether they realize it or not. Despite her languid qualities, she can be motivated to get a little serious with the promise of rewards or benefits.

Life as a kunoichi has shown her firsthand the thrills of living on the edge. She’s a daredevil, looking before leaping and doing a lot of things just on a whim. As casual and cool as she can be, Yae is still a dangerous woman. She can be merciless and cold and this extends to some of her hobbies. A thin veil of sadistic tendencies lies beneath her easy-going demeanor and she can seem hard to trust.

Appearance: Yae's hair is the most distinguishable things about her, often kept back in a ponytail. A silm, toned build made for mobility is hidden beneath her traveling digs. Her trench coat is lined with hidden pockets along the purple in-mesh, useful for carrying a number of ninja tools and utilities. Wears a fishnet shirt and compression shorts underneath with an orange miniskirt buckled around the waist. Has a tomoe tattoo on the backside of her neck. 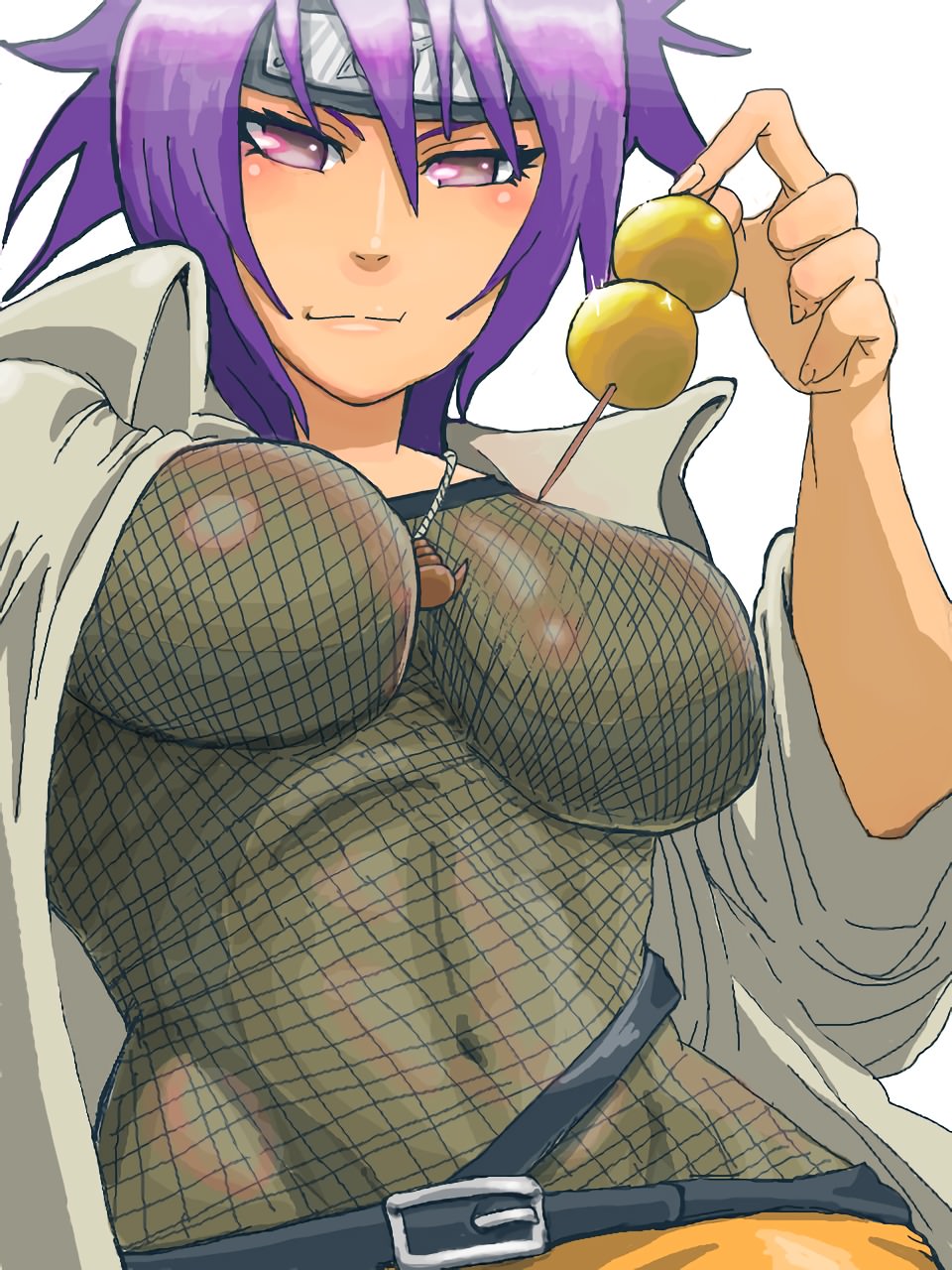 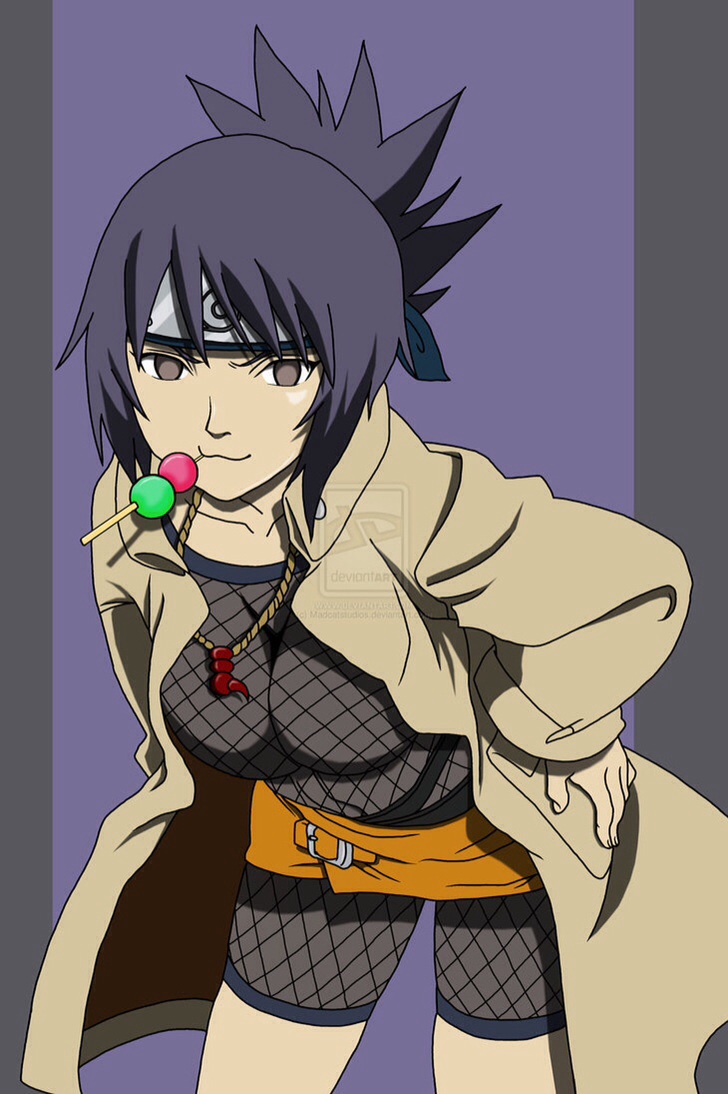 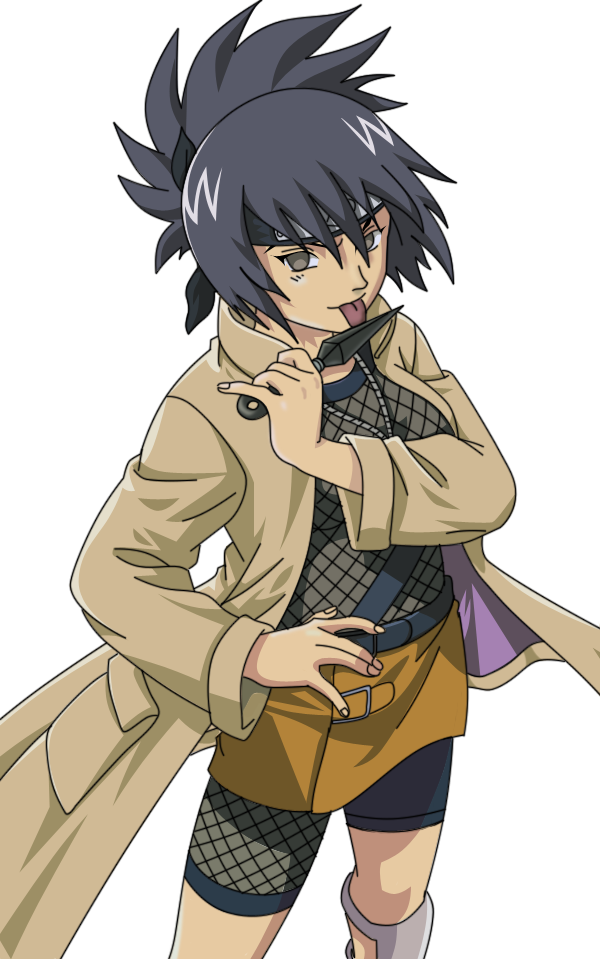 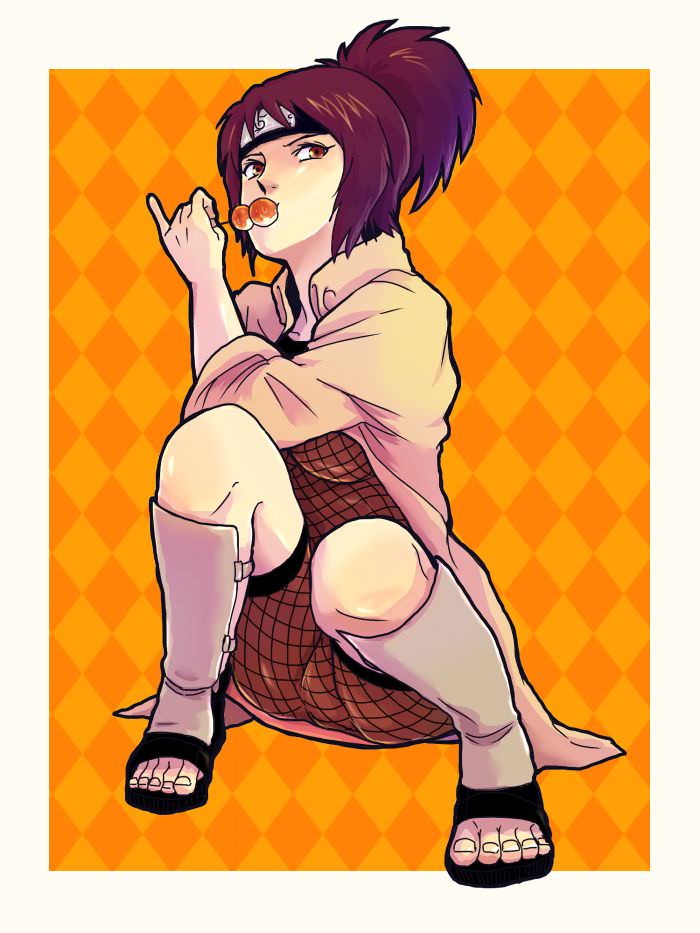 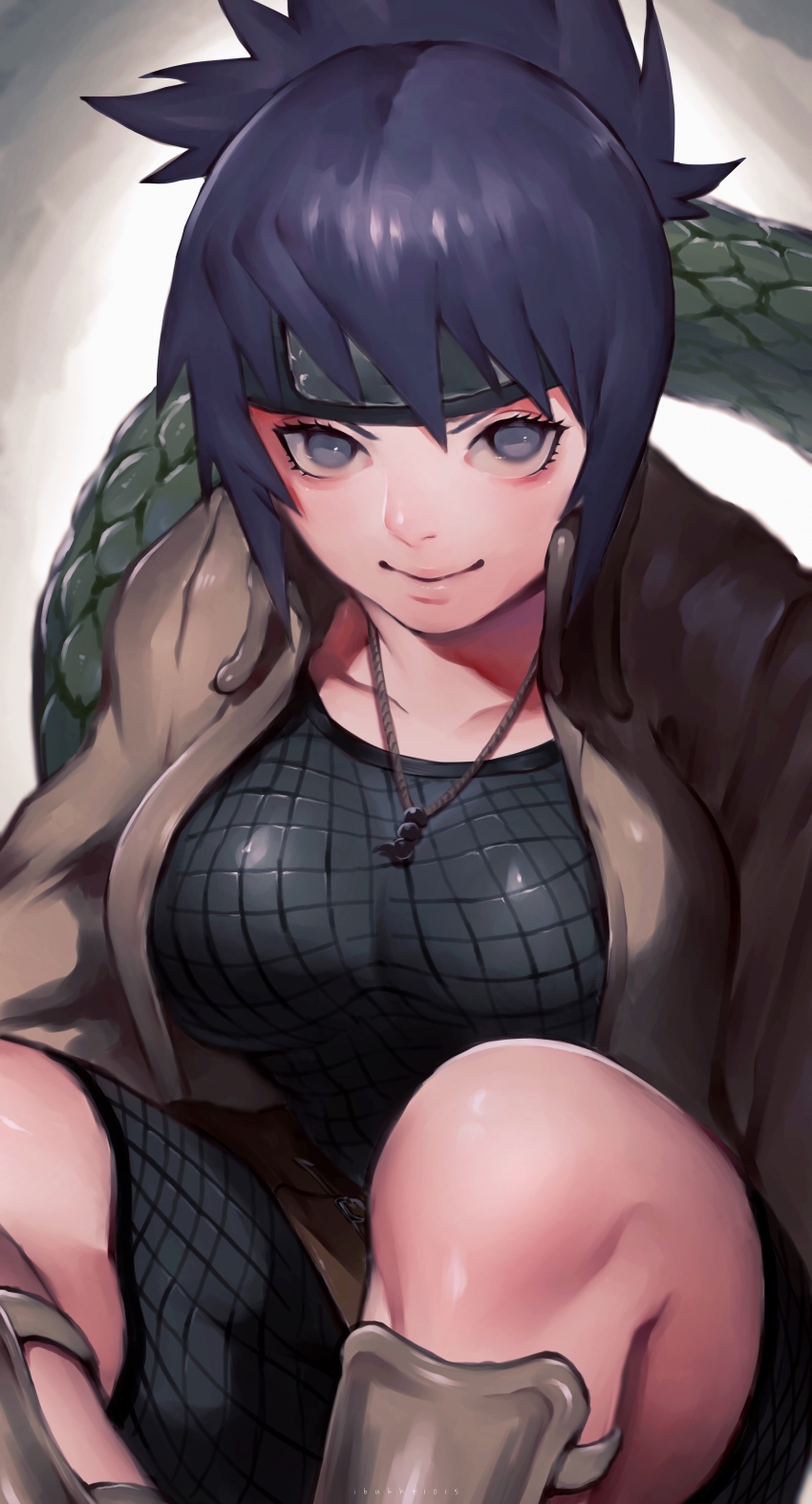 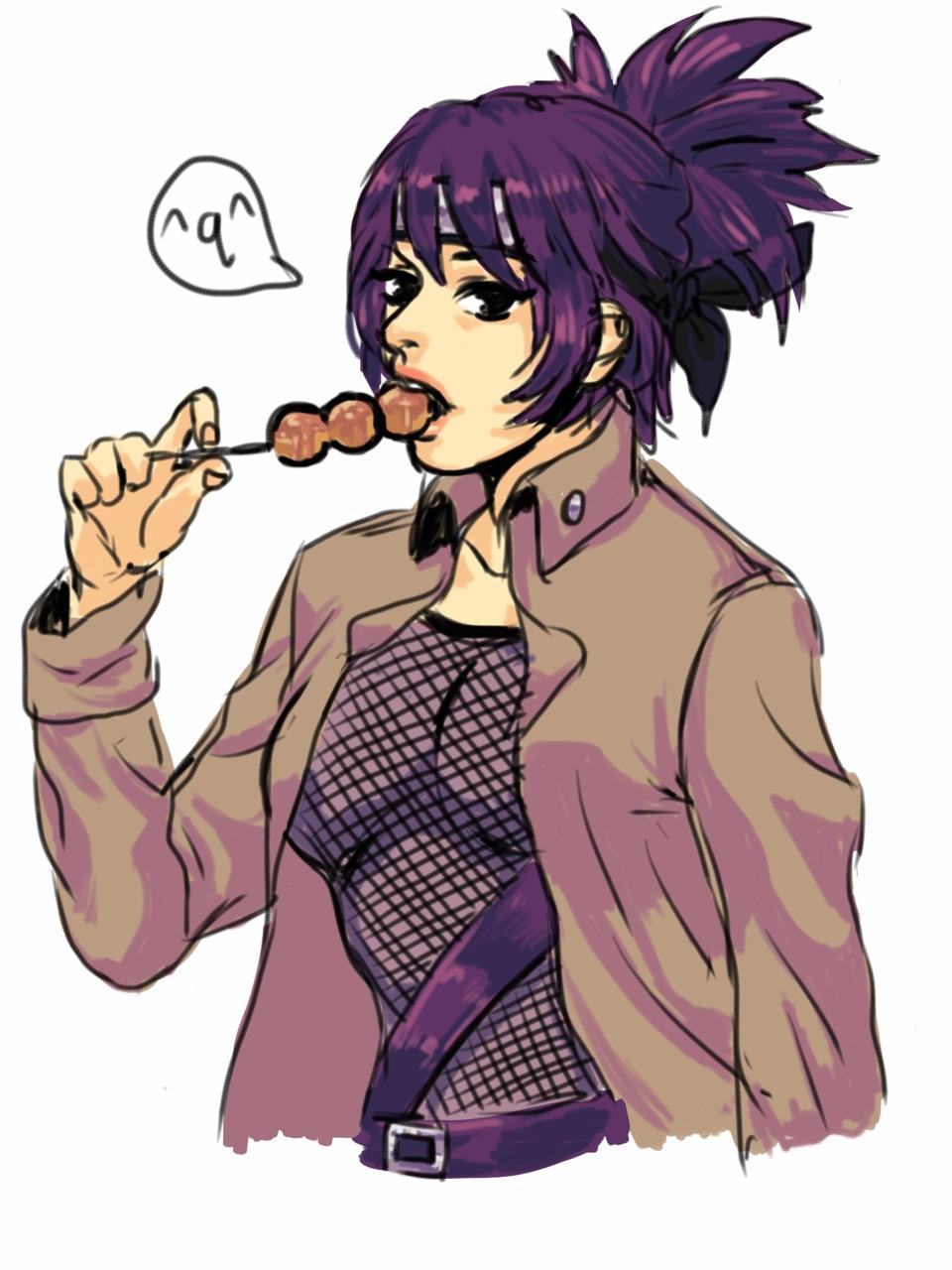 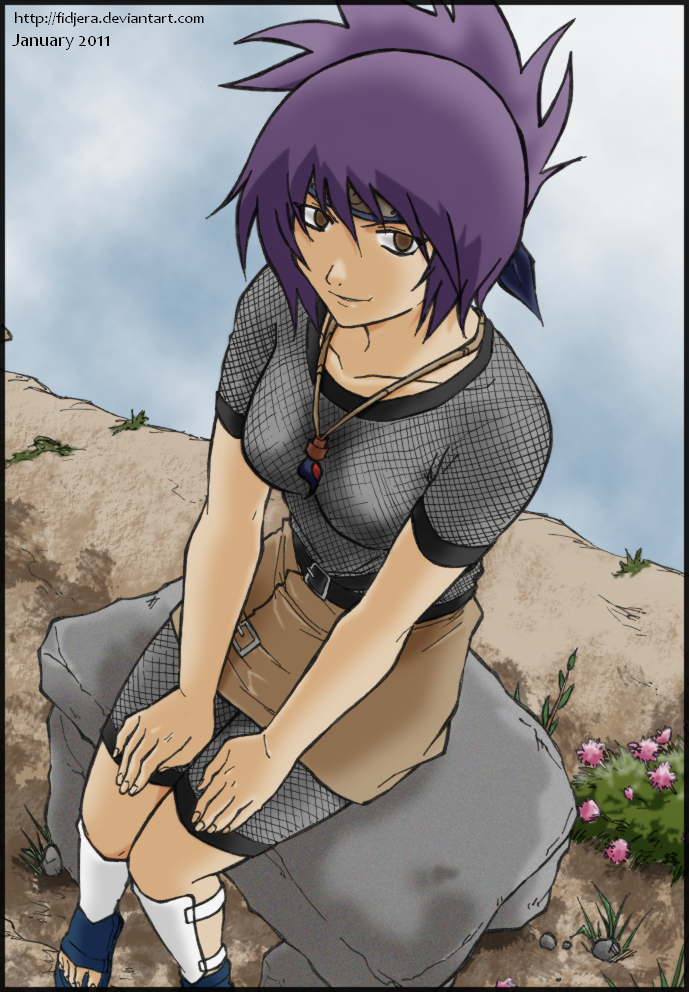 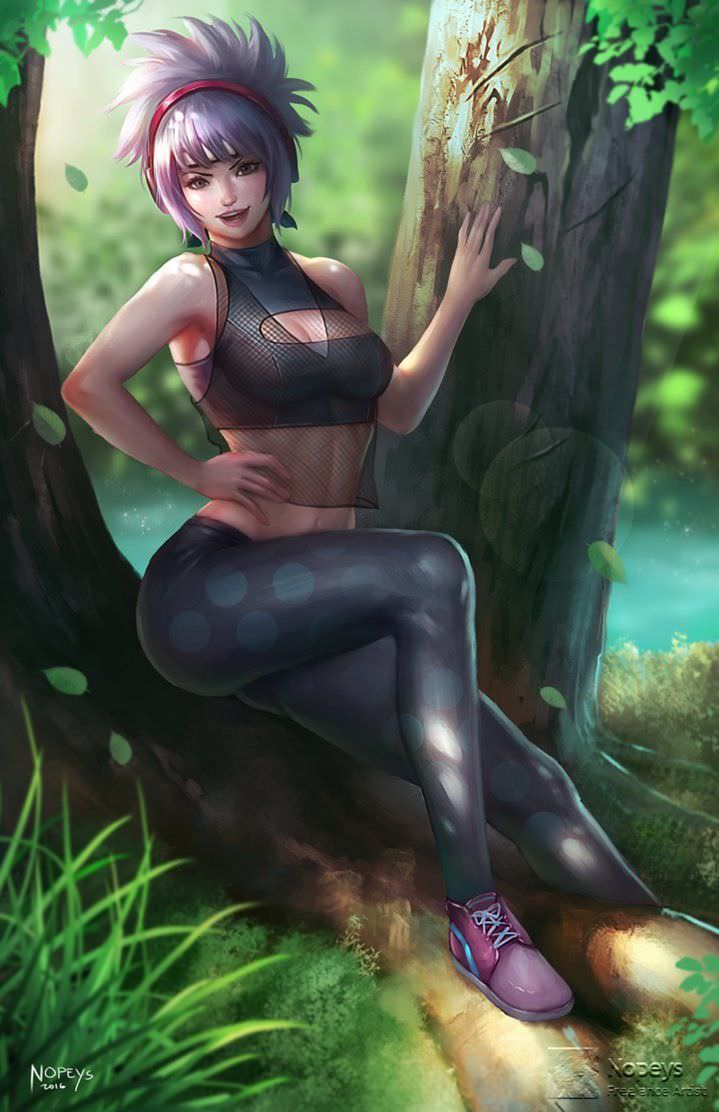 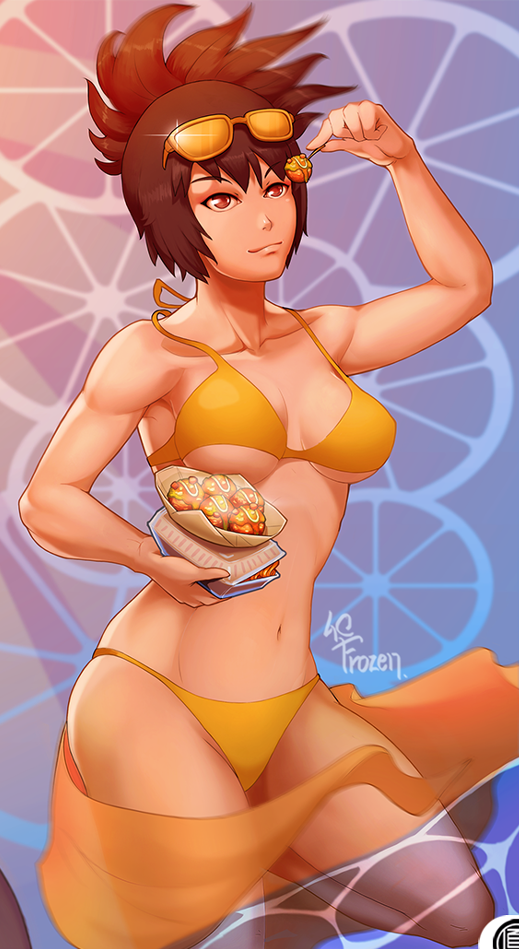 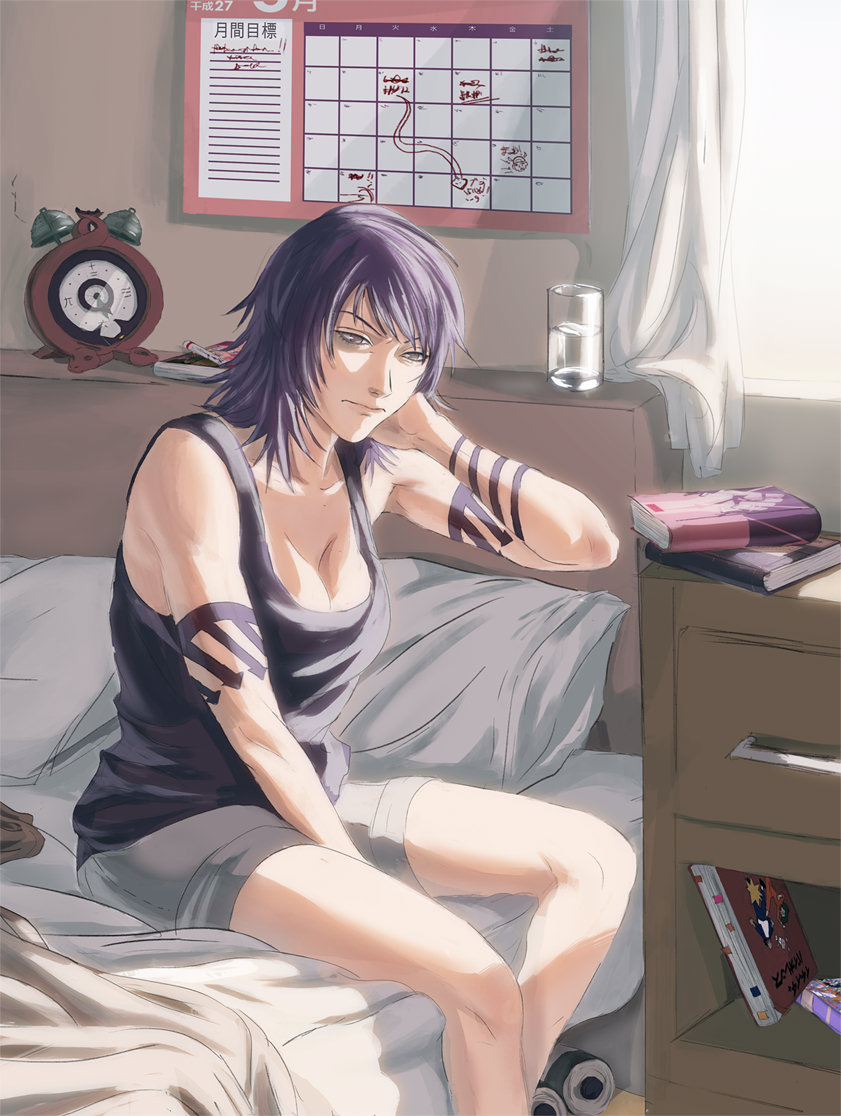 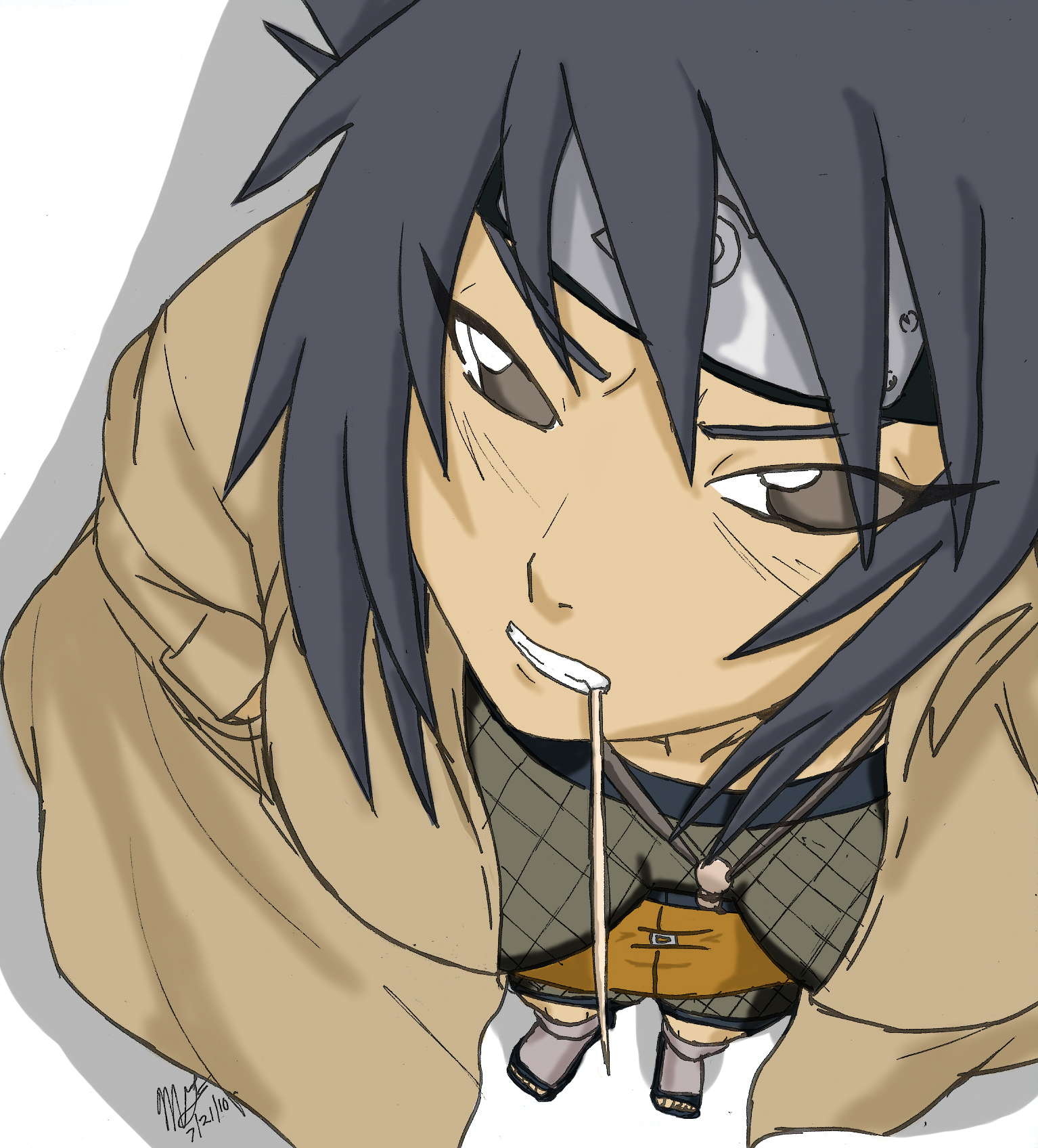 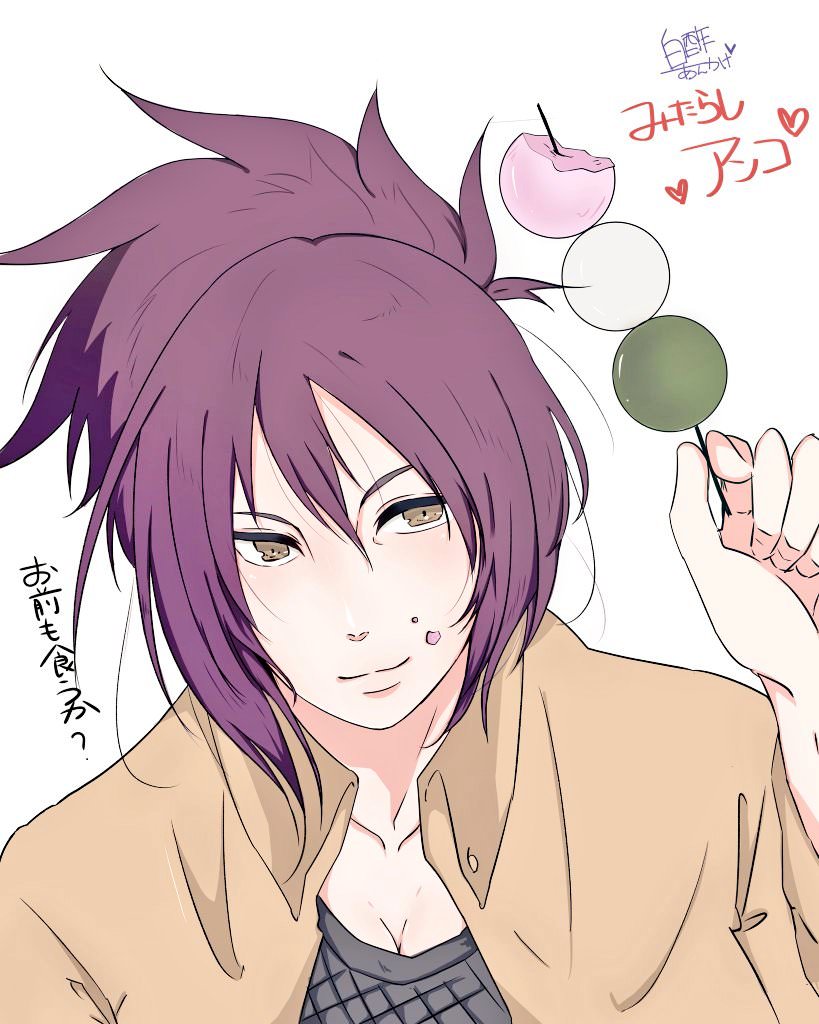 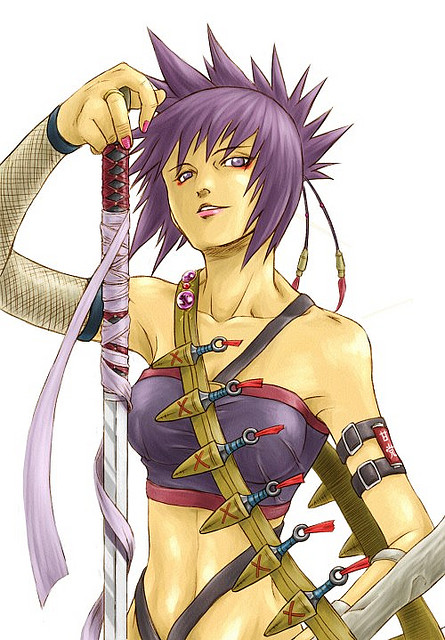 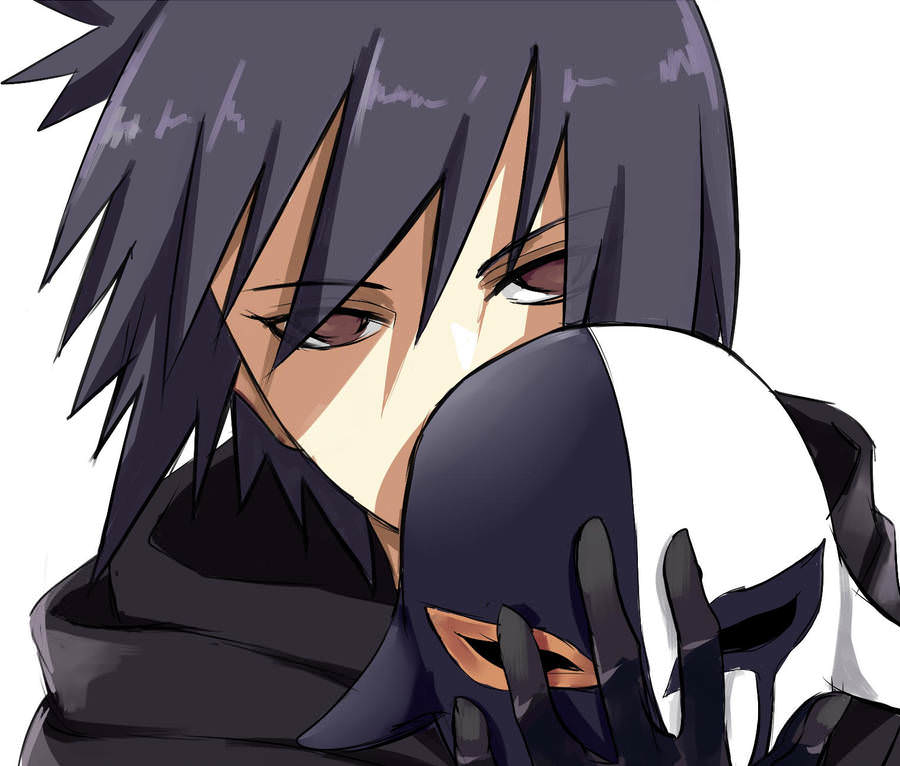 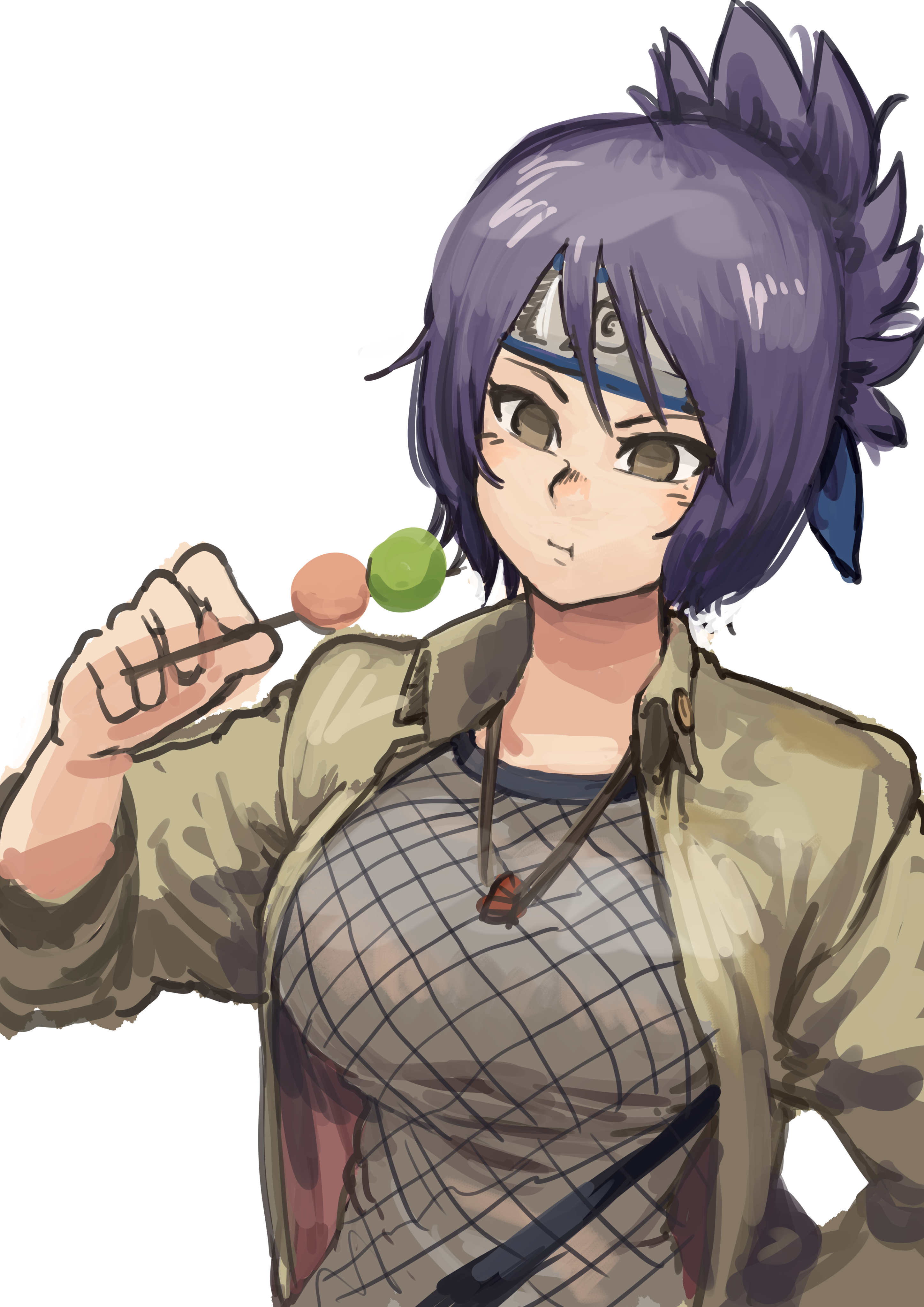 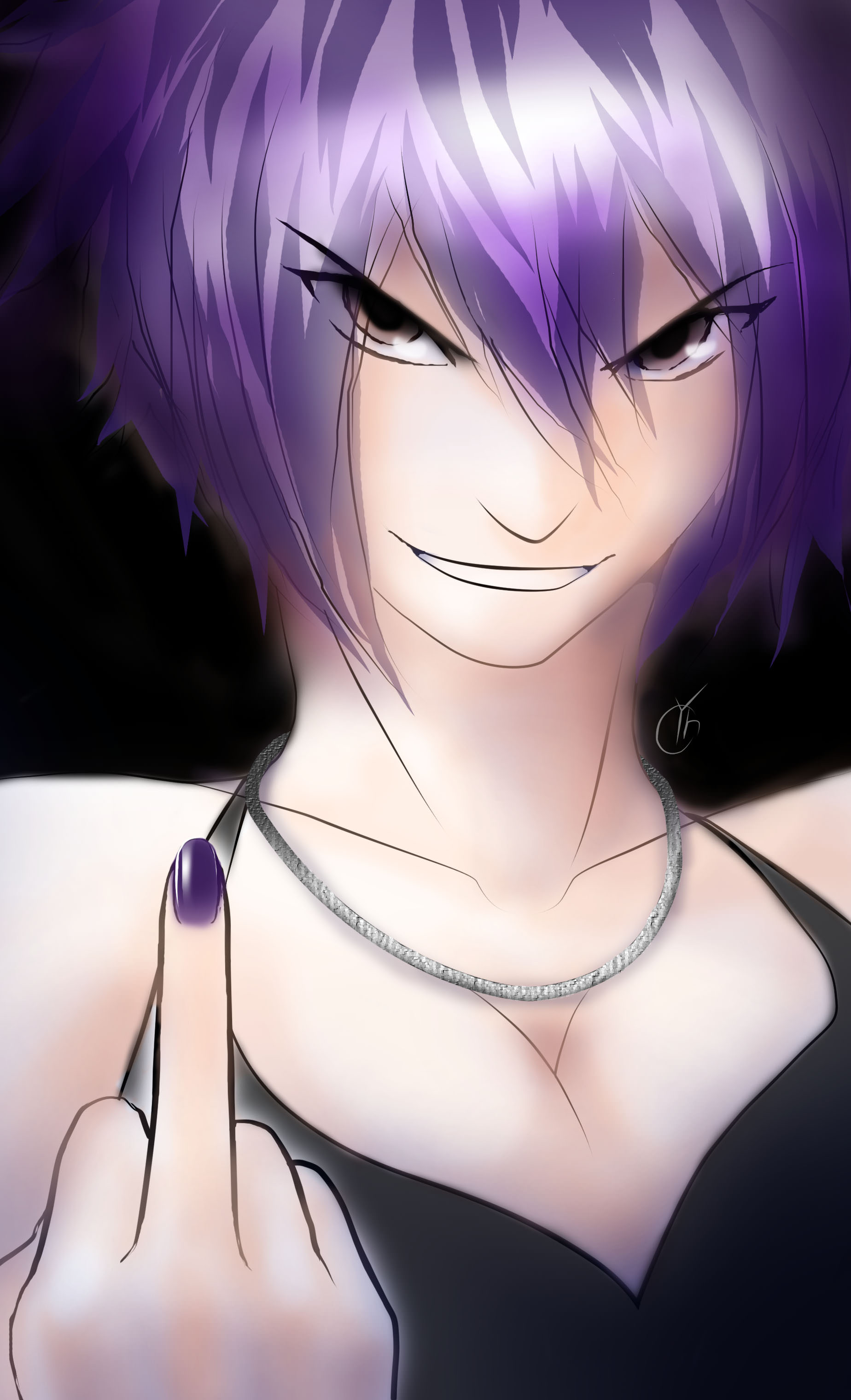 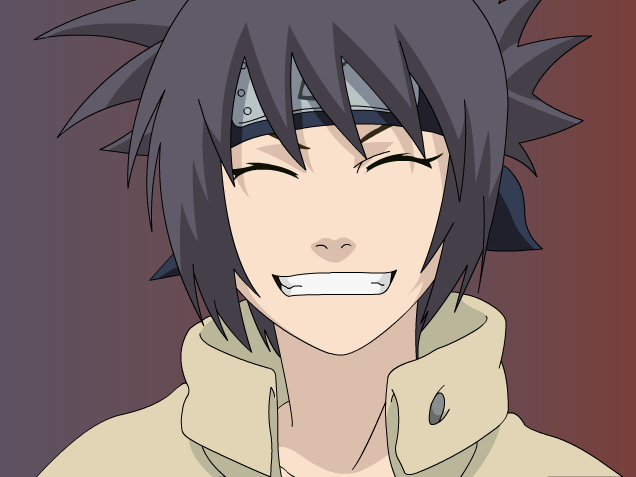 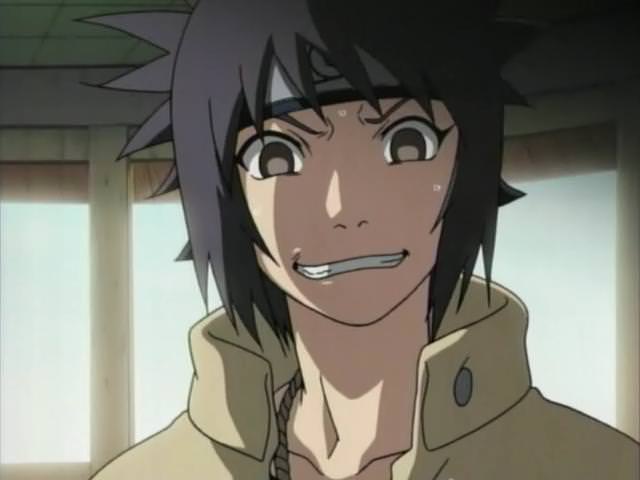 Just imagine their surprise when Yae suddenly appeared one day in one their storehouses, stuffing her mouth with rations. The confusion surrounding how one little girl managed to slip past the eyes of a 24/7 patrol without so much as a reed whistle was quickly replaced over what should be done next. The grandmaster was summoned and would decide her fate. It seemed like an easy choice. Their society was one of many well-kept secrets that had remained hidden from the contemporary world through periods come and gone. Trespassers were never forgiven, without exception.

Until now it seemed. The grandmaster himself took Yae under his wing and trained her relentlessly in their sacred arts. Even as a child she was quite durable and had a remarkable penchant for refusing to die. Her marksmanship, survivability, and ingenuity were borderline prodigal for her age. But more than anything, she loved to fight. Shinobi skills could only be bred in the midst of combat and Yae jumped on every chance to learn something new. Students, teachers, farmers working the paddies. Yae was always ready to row with anyone within arm's reach and throw shurikens every which way. Even as her mentor attempted to keep a lid on her, there was a subtle, silent push from him to continue, enjoying seeing her grow.

It was a shame her excellence in combat didn’t translate as well to a shinobi’s more rudimentary duties. Fighting was only a small part of a ninja’s role to the clan and herself. Cleaning the temple, feeding the sparrows, going through meditations, the grand master’s lectures, the mountains of literature. Routine. Boring boring routine. The better she honed her craft, the less care she had for the fundamentals. Her habit of skimping out on her duties and disappearing earned her a reputation as the local misfit. A talented misfit.

She found chances to prove herself after becoming old enough to undertake contracts independently. It wasn't long before she established herself as a competent infiltrator and excellent spy. Her contributions to the clan were quickly recognized. Finances flourished and expansion was underway. Four years of solid work, they removed her from the field and entrusted her with instructing future generations.

That was something of a mistake. Being able to reliably churn out excellent cadets played no small part in making her somewhat complacent. Her strict and daunting lessons often plunged her students headfirst into danger. Struggling was how she measured success. Pain and hardship were the ultimate motivators that forced theory into practice. The more her students suffered, the better they perform in the real world. That was her belief, though many would say she simply enjoyed seeing her pupils in agony. Which wasn’t wrong.

Nevertheless, it was an irreversible fact of the present that the place Yae called home had long lost its purpose. The time of swords and warring states had passed and the attractive life in the surrounding cities slowly but surely stole away most of the villages’ promising youth. Without any pupils to torment, boredom quickly set in. She forced a group of her colleagues to bring her along with them into Yokkaichi. An hour or two outside of the village quickly spiraled into countless late-night escapades that risked exposing the entire village.

The elders’ attempts to bar her did little good. She may have been an excellent ninja, but Yae’s loyalties were to herself. She was reprimanded only once before she went with the tide and disappeared altogether. The interception team sent to retrieve her came back empty-handed. Yae vanished.

A dingy apartment in Nagoya became her new home for the next few years as a freelancer. As she absorbed herself into the ever-shifting hustle and bustle of urban life, her respect for tradition faded away with the last two decades of her life. She made a lot of money off her contract work and used that to keep getting drunk and keep having fun. Technology, clothes, music, food, drink, sex; modern-day Japan became her next addiction.

Her day job and the underground scene suited her longing for combat for a time, but she found the competition lacked the panache and stakes she’d expected. They ended too quickly, came to her few-and-far between, and never offered much of a challenge. She needed something more exciting. It was around that same time she’d been scouting across the country for potential work, and came across a curious little company in Tokyo...

1) From the Shadows- The show goes off the rails and Yae steps into the ring. Nobody told her she was just the opening act.

2) Twin Shadows- Let's see how they do things on the Jersey Shore.