Regardless of his predicament, Okami couldn't help letting out a final, muffled moan of disgraceful pleasure in Selunelia's kiss before she would go limp, fire-wopman carried over Astride's shoulder as the two sexy powerful ladies walked up to Auphemia's mansion, keeping up with the casual convo.

The wolfboy would feel even more misarable if he knew that Andy had suffered the same fate that awaited him now. To become a male plaything for Lady Auphemia and her busty maids... just like his fellow member of the legendary four heroes, Andy!

But for now, Okami's mind was free from worries, just floating in blissful sleep dreaming of fruity lipstick-kisses, and cotton-candy softness as he took his helpless nap on the couch.

"Mnnnnghh.... y-yaaawwnnn <3", The handsome wolfboy would stir and yawn nicely, like if waking up from a pleasant sleep, when he suddenly gasped at the disorienting scene: he was laying on a couch in the middle of a huge luxurious hall.
A beautiful girl was sitting near, quietly reading a book like you would expect from a babysitter in charge of a little boy (the mere idea made Okami blush in discomfort). She was clad in a skimpy maid attire that strained to contain her exhuberant breasts, which was not a surprise anymore.

“Ah, you’re awake now.” Sejna would comment, looking up from her book as she heard the wolfboy come to his senses. She would then place her book on the nearby table, correcting her legs and recrossing them as she continued. “Please mind the mild wait, my Mistress will be here to properly greet you in a moment, she has some last minute business she had to take care of first.”

Only a few seconds after her comment did a set of doors from Auphemia’s office open up, the busty woman walking out in stride as she saw both her maid and the boy. “Ah, she was already here?” She’d question, getting a nod from Sejna. “Well then, it’s a real pleasure to make your acquaintance. My name is Auphemia, the Lady of this Here manor.” She would introduce, winking to him as she did. 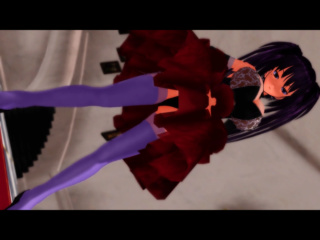 Okami would blink in uncomfortable confusion all the time during the short, totally not explainatory conversation.
All he knew was that he had been passaged from being Selunelia's prisoner to wake up in this luxurious mansion, at the presence of more sexy, powerful looking women. It didn't take a genius to know that he was not safe here.

"O-Ok Lady Auphemia I don't know what affairs you have with that witch but... uhh... I w-wont... gulp.." o///o
Okami stood up and turned around, resolute to face the noblewoman... but he would feel a warm blush rise up his cheek the moment she appeared in all her playfully-flirtaceous glory, her impossibly large, breast-defying bosom bouncing in a way that was impossible to ignore.
_________________
Ryu's team:

“Oh no need to feel so nervous, I don’t bite.” She would say, walking closer to the boy as her smile remained, offering a friendly handshake. “Excuse me for being rude, but may I ask for your name as well? It seems only fair that you give me yours, since I’ve given you mine.”

Despite the clear warmth and approachability Auphemia possessed, it was clear that to an extent the busty beauty was more than she let on. If it wasn’t clear from her incomparable curves, it was in the shocking level of power that could be sensed from her. Although not as powerful in magic as Selunelia, a noticeable spike in physical capabilities would likely be detected, along with impressive self control, as shown as if he would accept her hand she would grip his gently, the handshake showing no initial ill-will.

And while there certainly was no ill-will, she certainly had some mischievous fun planned for the wolfboy. However that would be very difficult to detect from her graceful presence.

Unlike his thoughtful friend Ataru, Okami had never been good at gauging spiritual energy and combat levels to start with. But even to him, it was evident that a warm aura of womanly power surrounded Auphemia, tending to envelop him into a gentle yet somewhat oppressive embrace. He could feel it while shaking hands with her and...

"Ugh... s-sorry for the rudeness. My friends keep saying that to me: manners Okami, manners. So... well yes my name is Okami, as you must have guessed.. o///o".

Done with one of the most awkward introductions ever seen in Auphemia's mansion, the flushed wolfboy regained a composture as he went straight to the point.
"Still.. I'd appreciate if you could tell me why I'm your... uhm guest".
_________________
Ryu's team:

“A pleasure Okami.” She’d say as she released his hand without trouble. “Why you ask? Well I suppose that I figured you wouldn’t want to be a simple toy to the women of Luciana, with day in and day out matches against their soldiers and noblewomen for sport. I tried to get your two other friends, but unfortunately Eiruferu was much better at affording the two. I could only put enough funds to purchase you, but I wouldn’t like using such language.”

She’d then take a step back, putting a hand on her hip as she looked the boy up and down. “See I’m much more of an... opportunist, when it comes to situations like yours. Truthfully I simply paid Selunelia’s fee as a means of getting you out of her or Eiruferu-san’s grasp. See, I enjoy some good fun in a match of wrestling, but they’re much more adamant on the pure domination of women over men. I prefer to simply have fun.”

“So while I will extend the freedom for you to simply leave, I would like to at least make a wager for you since you did cost me quite the fortune.” Auphemia would add in, crossing her arms under her bosom as she spoke. “I had heard from one of your friends, Andy-kun, that you’re group are competent fighters, so I would like to offer you a match against me. I wish to see what one of the legendary heroes who defeated the Demon King is capable of, and see if my investment of keeping you out of Eiruferu-san’s clutches. What would you say?”

Okami listened intently, his face shifting from concerned to puzzled to... just flustered as Auphemia typically mixed articulated arguments and flirty teasing in her conversation.

His attention perked up at the name of Sir Andrew. He wanted to ask more about his compainion in the great Demon King quest, but he took mental notice and decided to let the talkative busty lady finish without interruptions.

"Uhm... see lady Auphemia, I'm a simple guy", Okami would finally say, which would sound quite manly, if he wasn't trying his best not to blush before those bouncing melons.
"Uhh... so to put it simple, I win and you set me free? A-alright deal", he promptly accepted, though with a bit of stutter in it that he would have wanted to avoid.

"I have one condition though. I'd like to get all the informations in your possess on where to find my friend Andy, when we finish our match", he finally added, not imagining that his words would be of nice amusement for Auphemia.
_________________
Ryu's team:

“Fufu, that sounds fair enough to me.” Auphemia would giggle, loving that she very well knew of Andy’s condition. But for the sake of fun and mystery, she’d save that it’d bit of information for later, once she has the cute wolfboy under her seductive spell.

Now with the plan set, Auphemia would usher Okami to follow her, flirtatiously winding her finger in her direction as she turned and walked elegantly. She would direct the boy to one of her special wrestling rings, having it all set up and ready for their match. “Sorry if it’s a little different than normal, I enjoy designing my own stuff too much.”

The busty woman would then climb onto the ring, moving in between the ropes and stepping a good ways back for Okami to enter. “So then wolfie, is there any particular rules you would want? If not, I’d be willing to make them for us. And don’t worry, I promise to be fair with them if it’s up to me.” She said, her sweet tone matching the subtle movements of her curves as she stoo in her ready stance.

Maybe she was a partner in crime with Selunelia, maybe not, but Okami had to admit that Lady Auphemia had ways to catch a male's attention... damnedly hot womanly ways... o///o
Such was the course of his flustered thoughts as he followed her beckoning finger and, of course, her hypnotically swaying curves into one of her special fighting areas.

His face went all red at realizing the... details. Far from being just a wrestling ring area, the entire room was meant as a shrine to womanly beauty, with particular emphasis on those female assets that made Auphemia very proud.

"Q-quite the recurring theme here.. o///o",
Okami would gulp in fluster, before he'd shake his head deciding he'd better focus on Auphemia's words instead... and not on her dagngerous curves.
"Uh... oh no. It would be rude of me to pick my own rules in a match versus a fine lady. So I'll let you choose match conditions instead".
The naive gentleman wolfie.
_________________
Ryu's team:

“Hmmm, very well. I believe I have a good idea for us to have.” Auphemia would say. “How about we keep this a very simply kind of battle? We will continue until one of us is unable to continue on in the match. That sounds fitting, since if I win I’ll be expecting you to be my butler and Bosom Buddy.”