» Acrobat against Giantess part 2: the gym encounter!
by Ringropes98 Today at 9:10 pm

» Jasper Rhys Vs. Ryo Kamiya!: Rank Does Not Matter. [Debut Match]
by Diesel_Electric_Razor Today at 8:41 pm

» Halloween match! Trick or treat? - The Part Timers vs Blair Takashima
by pu-level-up Today at 6:44 pm 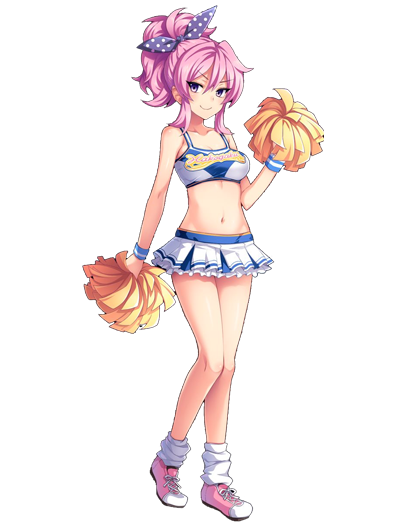 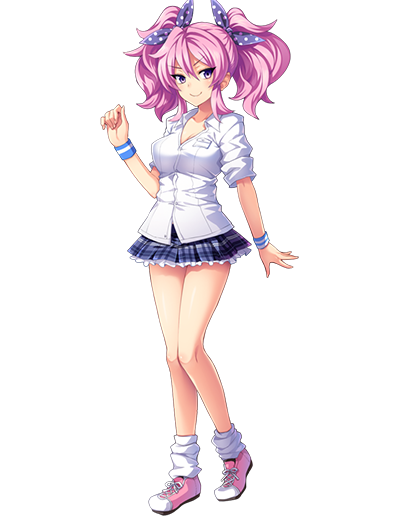 
Personality: A bitchy, bratty, haughty cheerleader. She parties a lot, she loves being popular, and she loves to impress her jock boyfriend on the football team. She flaunts herself. She'll make fun of their lack of clout, their weight, how her boobs are bigger, how her life is better and they know it. Although she has your typical bitchy cheerleader attitude, she does show sadistic tendencies in her wrestling.

History/Fun Facts:
Past: She's a mean, spoiled, bratty girl who got it from her mom, Jacquelyn who's a very powerful woman who she always admired. Jacqueline was already a successful model that appeared in magazines, calendars, and commercials. She was a socialite that always got invited to all of the VIP parties, the lavish galas, and red carpet events thanks to her good looks. She eventually became scouted by a recruiter to join pro wrestling and she eventually became successful at submissions. She was known for her “Banana Splits” finisher where she made many tap out by forcing them to do the splits.

Her dad, Stanley Starling was a successful actor that was a part of a legacy of many famous “Starlings” before him. It wasn’t until he was involved in a scandal where his ex-girlfriend accused him of making out with him to get a movie role. He was proven innocent, but the damage was done and his career ended. Jacqueline divorced him and she ended up keeping Victoria and Lily, while Stanley kept Sammy, the other offspring.

Victoria got the need for attention from those two contrasting lifestyles. She also developed her bitchy, haughty attitude that she would eventually be known for. Just like her Mom, she wanted a man in power in her life. Enter Brock, the star football jock. Brock had a good life. Star player. Had a sweetheart by his side named Emma. Everyone loved him. Victoria wanted him. She successfully flirted with him and caused an incident at school where people discovered that Brock cheated on Emma. The good guy jock cheated. It nearly soured his reputation. He was still a star on campus for his athletic ability, so his social life didn’t get damaged as much.

Since he was vilified for cheating on the "good sweetheart", he tried to fix his reputation. But seeing all the people that used to cheer him on give him hate, he grew jaded of it all. Instead of feeling remorse or bad, he used all that negativity to fuel his rage and embraced the "bad boy jock" persona. He knew no matter what he did, he'll always have the stigma of the "star player who cheated on the school's sweetheart" Eventually, Brock received a football scholarship to a university, which caused both of them to be in a long distance relationship.

When Emma went to confront Brock in the locker room the night before graduation, Victoria snuck up and locked her in an Octopus Stretch hold that she saw on TV, which reignited her passion for wrestling. Brock enjoyed it.

Victoria enjoyed wrestling down Emma and that inspired her to chase wrestling professionally like her mother did. She saw a flyer for “AFW”, called her mother for a favor to get her foot in the door and the rest was history.

Fighting Style: Victoria Loves submissions! She knows a lot of intricate holds that either forces them into a leg split or ties them up like a pretzel. She utilizes her cheerleading knowledge along with her Mom’s wrestling. She combines them to give her moves some uniqueness from cheerleading and the haughty submission styles of her mother. 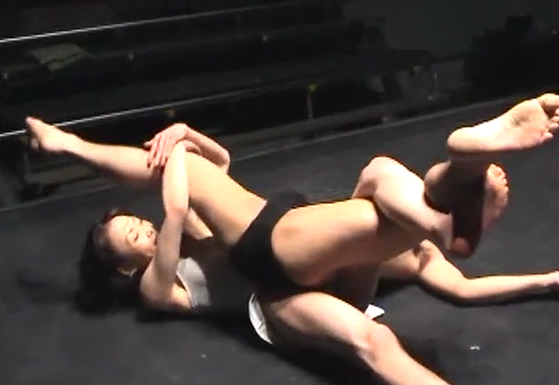 Also known as The Banana Split, her mother’s famous move. She grapevines her opponents leg with her legs while pulling the other one apart with her arms in a forced splits. Instead of keeping the Banana Splits name, she renamed it to the Virgin Killer to humiliate males with and the Panty Shot to humiliate females with.

"Who's the slut now, spread eagle?"

“Awww, look, the shy little guy is trying to act all tough now that I’ve put you on display!” when done on a male.

“Oh my, your so damp! You sluuuut! You’re loving this! Me too!” -giggles- when done on a female.

“It took two generations to perfect this move and that pathetic moan is the best you can come up with? Geeze, show some respect and scream my name!” when done to her Brother, who shares the same finisher. 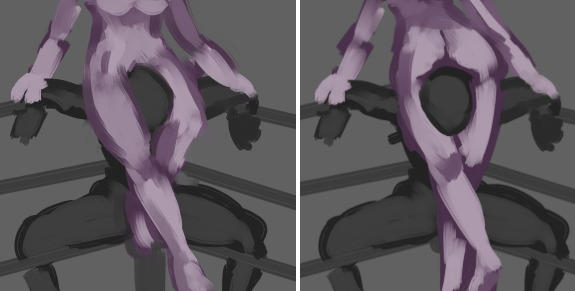 She drags her opponent to the corner then traps her their legs on both sides of the ropes. She strikes their groin while climbing up on their trapped legs to lock them in a headscissors. She was inspired by Goldust on TV who’d have a similar set up with the Shattered Dreams. She loved that the opponent’s groin was exposed and that they were trapped in the ropes in a leg spread, leaving them to their opponent’s mercy.

Variant depends on her mood. It’s called the Twisted Bliss because their opponents are twisted in a vulnerable position while they receive a blissful surprise from Victoria. The Nutcracker Suite was named because their opponents legs are trapped in a forced leg spread with the ropes to keep them from escaping. Victoria gives them a front headscissors with their knees ready to kick them in their exposed crotch.

Twisted Bliss has Victoria seated forward towards the ring. She has free reign to step on their crotch or increase the split.

Nutcracker Suite has Victoria facing away from the ring. She flaunts her ass more.

“Seems this well be my new seat for a while” 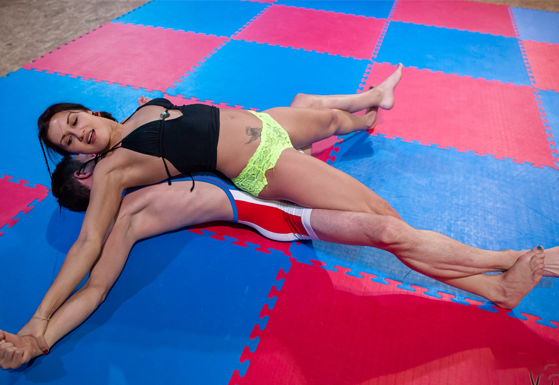 Victoria’s main finisher and her bread and butter. She lays on top of her opponent, hooks her legs onto theirs, then spreads her own legs, stretching her opponent to a painful split.

Naked Desire variant has her thrusting or grinding her hips while slowly unleashing the leg spread.

Cover Spread variant has her immediately going for the spread, hooking in a tighter knot on the legs, laying in a more dominant, sexy position for the cameras. Effectively using her opponent as a towel mat for extra humiliation.

"Squirming much hm BITCH?, because this is the same move I used on him....going down on him that is~" when used on a female.

"Can't even control yourself under me can you? Yet another weak man, what a disappointment!" when used on a male. 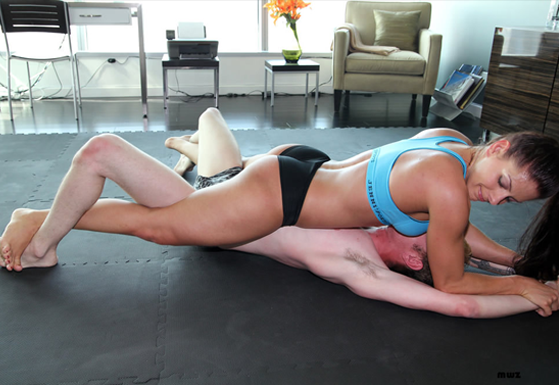 She lays on top of her opponent smothering them with their breasts, then hooking her legs to theirs to spread their legs in a split.

The Forced Relaxation variant used on females, she concentrates more on the split like a Yoga session. Sometimes adding in a headlock.

The Sweet Nightmare variant focuses on the sensual position. But she definitely gives them a good smother with their breast and slowly spreads their legs into a split until they’re in pain, spreading those legs into a V for Victoria! After all, a woman’s place is on top.

"Say na-night sugar, at least you'll pass out in some real tits mm?~" when done to a male.

"Boobs across the faaaace, least I HAVE tits you flat hoe~" when done to a female with smaller breasts.

"It’s not about the size, you cow! It’s about how you use them and I’m using mine all over your ugly face!" when done to a bustier female.

" Mmm, I thought you of all people would have done a better job of keeping out of this hold... have you gotten weaker or have I gotten stronger? Or maybe… -giggles- when used on her brother.

Inspired by the “V Stretch” warmup cheerleaders do to stretch their legs, Victoria thought it’d be an amazing thing to convert to a wrestling move. Stepping forward over her downed opponent, spreading their legs and hooking her feet under their knees.  She bends forward, pulling her opponent up to a seated position, taking a moment to indulge the crowd.

From there, Victoria loops her arms under those of her plaything for a reverse full nelson, rolling to the side with her feet still hooked under the opponent's legs to roll her upside-down, secured and with her legs spread. Trapped in a sticky situation, they have no choice but to tap or face pain and humiliation!

Sticky Situation variant has Victoria stripping her male opponent into their underwear before doing the move.

Spankies Splitsville variant has Victoria stripping her female opponent into their panties and gives them a wedgie in the hold.

Fun Fact: Although she hates to admit it, the Spankies Splitsville is a pervert’s paradise to take photos. She enjoys the attention though and the humiliation she gives to her opponents.

" Say bye bye to your hips!

“Even with your legs spread wide like this, you know they’re still looking at me.”

"Lets show you off to the crowd, they don't deserve a look at me so lets give them a second class view."

Victoria’s ultimate move! She locks her opponent in a standing Octopus Stretch. After a bit, she falls backwards while keeping the hold. She then grabs her opponents legs to force them into a split. She combines her cheerleading moves but also puts them in a nice leg spread in honor of her mother. The names are aren’t something Daddy would be proud of, but she enjoys it.

Seven Minutes in Heaven is for the guys that think have a chance with her. Sometimes a punch in the crotch is included.

Daddy’s Twisted Daughter is for the girls who call her a crazy bitch and named after the insult her father said about her. She increases the leg stretch 2x more than usual, while also increasing her brattiness up. She sometimes forces her opponents to stare at her heels.

Fun Fact: This move combines the Standing Octopus Stretch from her cheerleading days and the Banana Split from her mother’s wrestling career.
Battle Quotes:

“I know it hurts, baby, but just think of all the time nestled up against my perfect body. Are you so weak that you’re going to let a little pain stop the best thing you’ve ever had?” -giggles-

“Y’all got seven minutes of consciousness left...which means I got six more minutes to play~”

Match/Promo History:
None at the moment.

Profile Updates:
None at the moment.

Re: Victoria Starling - The Bratty Cheerleader