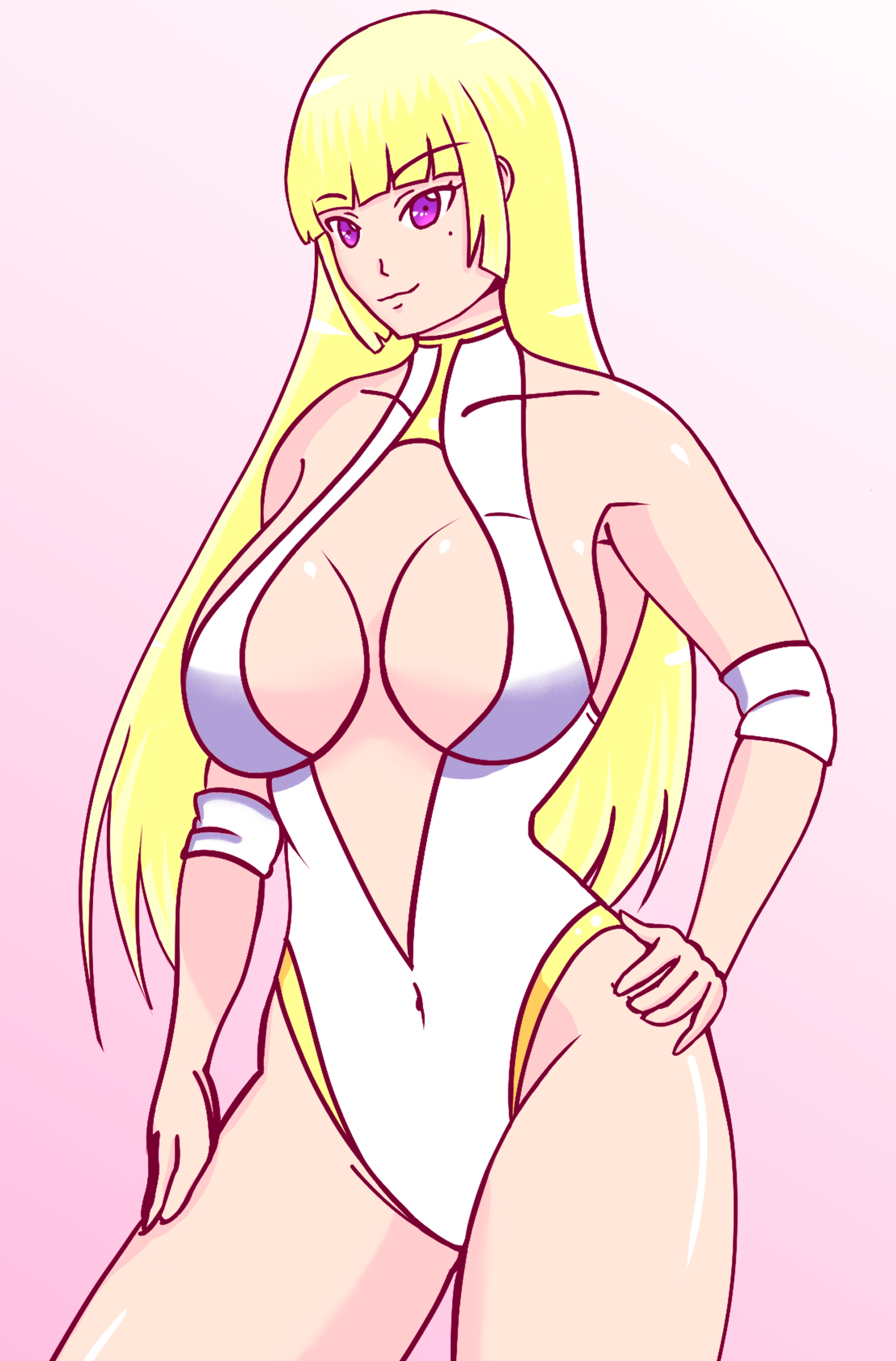 A balanced all rounder leaning towards submissions. She’ll take her sweet time weakening her foes, until they’re too exhausted to fight back. To get there she also doesn’t mind bending the rules just a tiny bit.

She will also adjust depending on her opponents. Ishtar is above all an entertainer, wanting to give the crowd a good show, if her opponent isn’t too strong or experienced it isn’t rare for Ishtar to handicap herself by not going serious or even overselling. Mainly to have fun, to lengthen the match and let them shine, before turning the tides around!

Her style is generally based on pro-wrestling, but she has added a bit of other martial arts, mostly judo throws to use her opponent’s strength and momentum against them. She will also use flashy moves whenever the chance to show off.

Once the match is over Ishtar usually likes to humiliate her rivals, her favorite style of choice being to force them to worship her with kisses only to end up being smothered!

If she’s really angry, which doesn’t happen almost anytime due to her carefree nature, her style will change drastically into a more fast-paced aggression, seeking to knock out her competition as soon as possible, even though it’s highly effective she heavily dislikes.
What’s the flavor in a quick and concise victory? For her, wrestling is all about being showy.

Strength: 3/5 - Strength isn’t her forte, but she knows how to bring out the best of it, she prefers to use momentum or even her opponent's strength against them.
Endurance: 5/5 - Lots of stamina, her main training routine involves cardio.
Technique: 5/5 - She knows her fair amount of holds in detail, what part to twist to inflict more damage and will use it to slowly torture her opponent.
Speed: 4/5 - Hardly outpaced.
Defense: 3/5 - Consists in dodging and quick wits, works for the most part.

Strikes: 4/5 - With a preference for kicks and knee strikes. She rarely uses them against non strikers or inexperienced wrestlers as she prefers grappling.
Submissions: 4/5 - A force of submission to be reckoned with, while she can twist and make a living hell for anyone trapped under her in mere seconds, she prefers to make it in a more draining, straining way.
Power: 3/5 - She’ll use moves that use momentum such as piledrivers or throws that use the opponent's strength against them.
Aerial: 2/5 - While she could be a good high-flyer due to her agility and flexibility, it isn’t her cup of tea, so unless she wants to pump the crowd by doing it it’s really rare to see her flying.
Counters: 4/5 - Being overall pretty balanced, wits and a bit of cheating, she can turn things around fairly well. 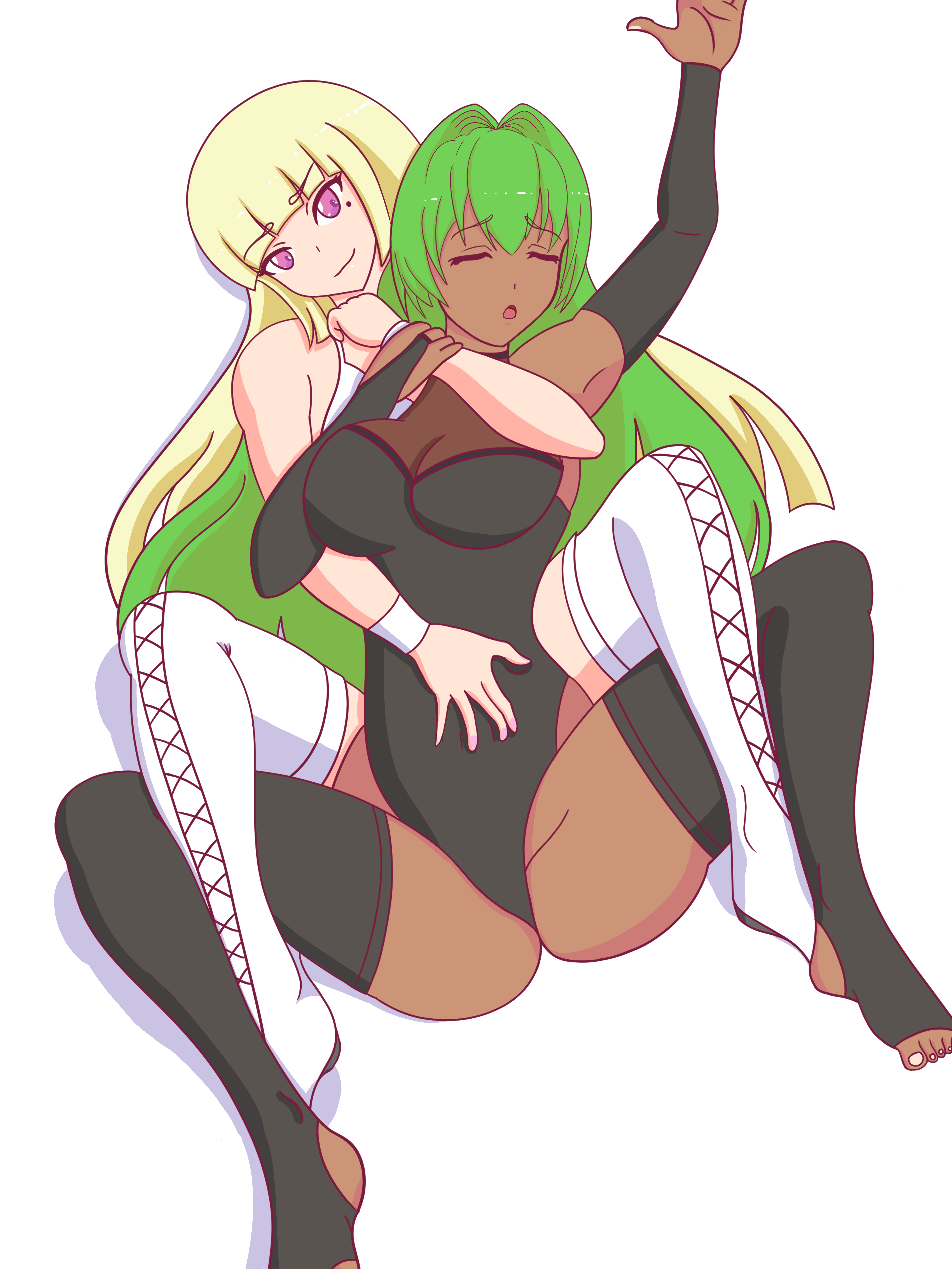 A combination of a rear naked choke while splitting her opponent’s legs with her own.

Dernier Basier:
Pulling the strings of her opponent's hair she makes her face the ceiling.
Approaching her lips, she gives a french kiss, leaving them breathless. (Picture Mickie James long kiss goodnight for this part)
Breaking the kiss, she drops her with a reverse leg drop DDT into a split legged pin.

Media Luna:
Sitting on her opponent's thighs and wrapping her feet on her shoulders, she’ll apply something of a camel clutch variation, pulling back and bending them into a half-moon shape. She'll finish things up with a breast smother.

Bewitching Meiga:
Putting her foe in a tree of woe. She’ll put on a show by lap dancing on them, doing this she’ll kiss and caress any exposed part of her body “charming her”.
Then Ishtar will carry her to the center of the ring in a sit-out piledriver position, she'll start eating her out gently only to slam her with a piledriver! Ending with a reverse facesit pin. 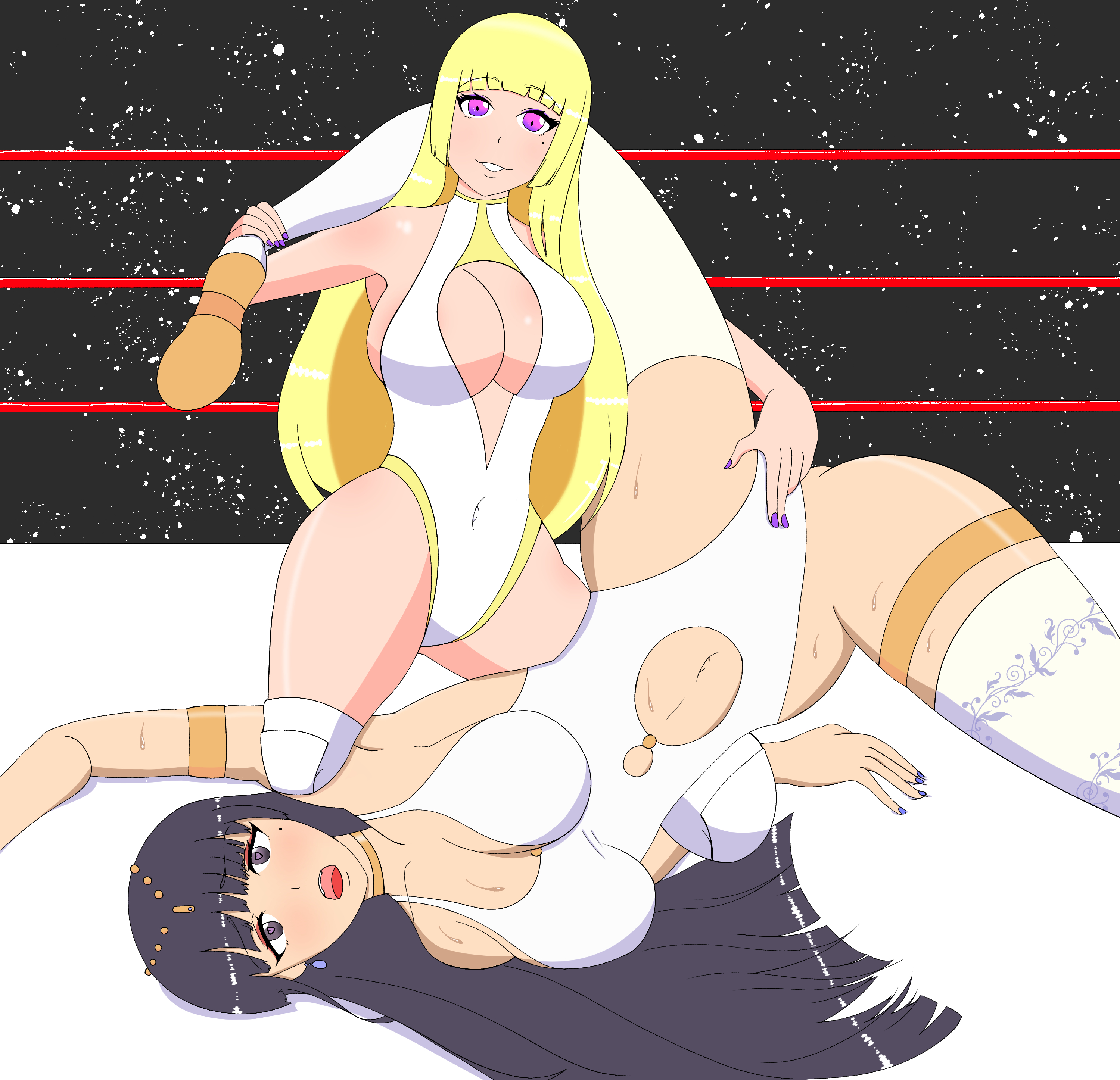 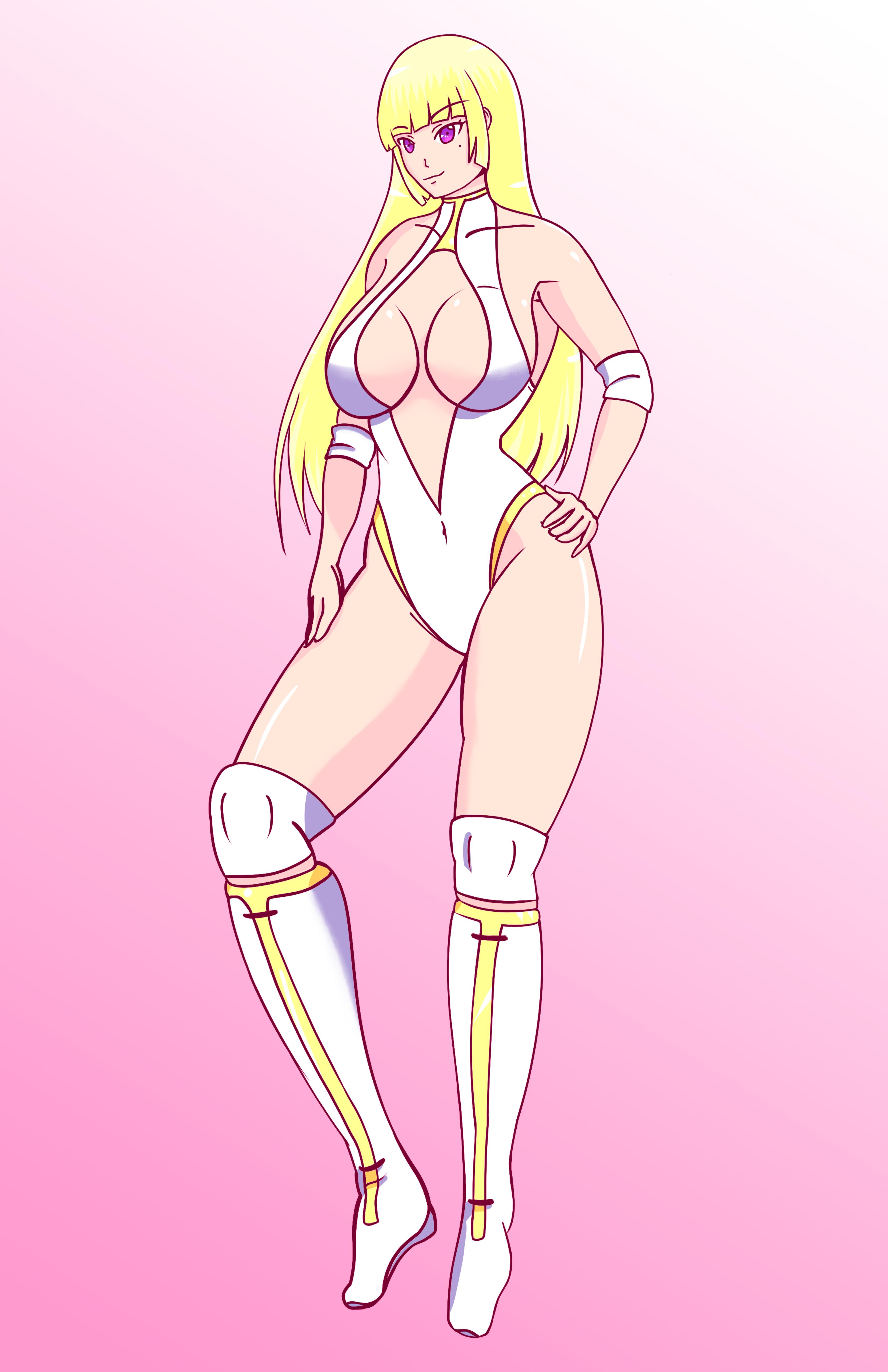 She values freedom of any form, the main reason she’s a cheater might be because of this, the only rules she’s willing to accept are her own… unless there’s some merit to be gained by following them.

Ishtar loves witty humour and banter and acts theatrically to give a good show, as such, will do almost anything to pump up the crowd.

Also, she’s a wolf in sheep’s clothing and usually acts in a way that doesn’t give a heel impression… though that mask can come off pretty easily, to reveal her more smug, conceited self.

While she isn’t necessarily a bad person as she won’t do anything for evil's sake, she can be pretty nasty merely to have fun. That said, if something wrong happens before her outside of the ring she’s most likely to step in her own unique way, though she will shrug it aside if asked about it.

Past:
Born in a small village of northern Galicia, Spain, she grew her first years in the countryside. But soon she and her parents moved to one of the largest cities in the country, Barcelona.

She was still a child and had to be flexible with a lot of things, mainly a completely different environment and even a language barrier as she tried to overcome her homesickness. Which she did eventually.

As she grew up she became good in sports and academics, charismatic and responsible, everyone regarded her highly and she started to become arrogant because of it.

While everything was good and she didn’t have problems of any kind… She felt something lacking… for her everything was dull, boring. She thrived for some excitement in her life.

As of this, she became more carefree, with a lack of motivation. Her obligations became a burden and she started to loath responsibilities.

She tried a wide range of different things to alleviate this, from gentle and calm fine arts to completely opposed more exciting, rough martial arts. But still, nothing was good enough for her.

One day with nothing to do, she decided to binge random videos from youtube… and she saw a wrestling match.

The outfits were flashy and provocative. The moves were over the top, impractical. But the flashiness was endearing nevertheless, their bodies tangling each other in complicated holds… It had some magic in her eyes.

Ishtar's couldn’t help but feel her heart skip a beat.. it wasn’t like anything at all she had seen before.

She decided to give it a go… and soon she fell in love with it. But there was something else she realized as she started grappling with other girls… Yes, the reason from that one time some time ago, where she stared at the butt from that girl on the beach wasn’t because she thought the bikini was cute… which it was, but not the point. Or that time playing twister whe-… you get the idea.

She continued wrestling, learning new moves, training, meeting new people, and when she reached 18 she went pro… while it wasn’t always a smooth path, she strided to the very top making a name for herself pretty quickly.

A ride that ended with her being the champion of one of the most renowned European’s women wrestling divisions… Valkyrie.

She soon became known as an infamous champion, and she didn’t care at all. But, the former’s champion's words started to linger in her head: “what actually makes a champion isn’t strength”, when she heard it for the first time she just laughed it off… but there was a small voice in her heart that’s just starting to reach out the true meaning of those words… but most of the time she just shuts it off and does her own thing.

Being the face of her division, it wasn’t strange that AFW reached out to her, the blonde was excited to put her skills beyond Europe!

- Ishtar didn’t grow up with brothers per se, but she has two half siblings which are quite older than her. Even though she never lived with them, still loves them and visits them whenever the chance.

- Her stage name is a pun of her own name, they also sound alike.

- Knows how to speak fluently in English, Spanish, Galician and Catalan.

- Some of her hobbies are: swimming, yoga, drawing, fashion and manga.

- She loves plushies and anything fluffy, though she won’t ever admit it publicly.

Outside of AFW: Champion of the European Women’s Pro-wrestling league “Valkyrie” - 2 years holder 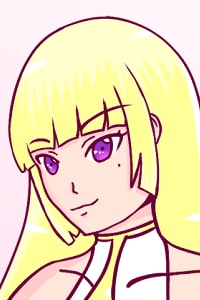