» Ryo Kamiya vs Ashley Anderson
by Gwyndolin Today at 5:24 am

As her heavy metal theme played, she looked herself over one more time, then took a deep breath, leaving the locker room and making her way out onto the entrance ramp. The crowd gave her a nice response, her valiant showings against Army since her return actually doing quite well to make her more popular than ever before, and of course, being a stunning blonde in a skimpy bikini didn't hurt, as she walked down the ramp, bare feet on cold steel, the former soldier being less stoic than usual as she waved towards fans, slapped a fan that reached out and grabbed her butt, and even blowing a kiss to the female referee upon getting into the ring. 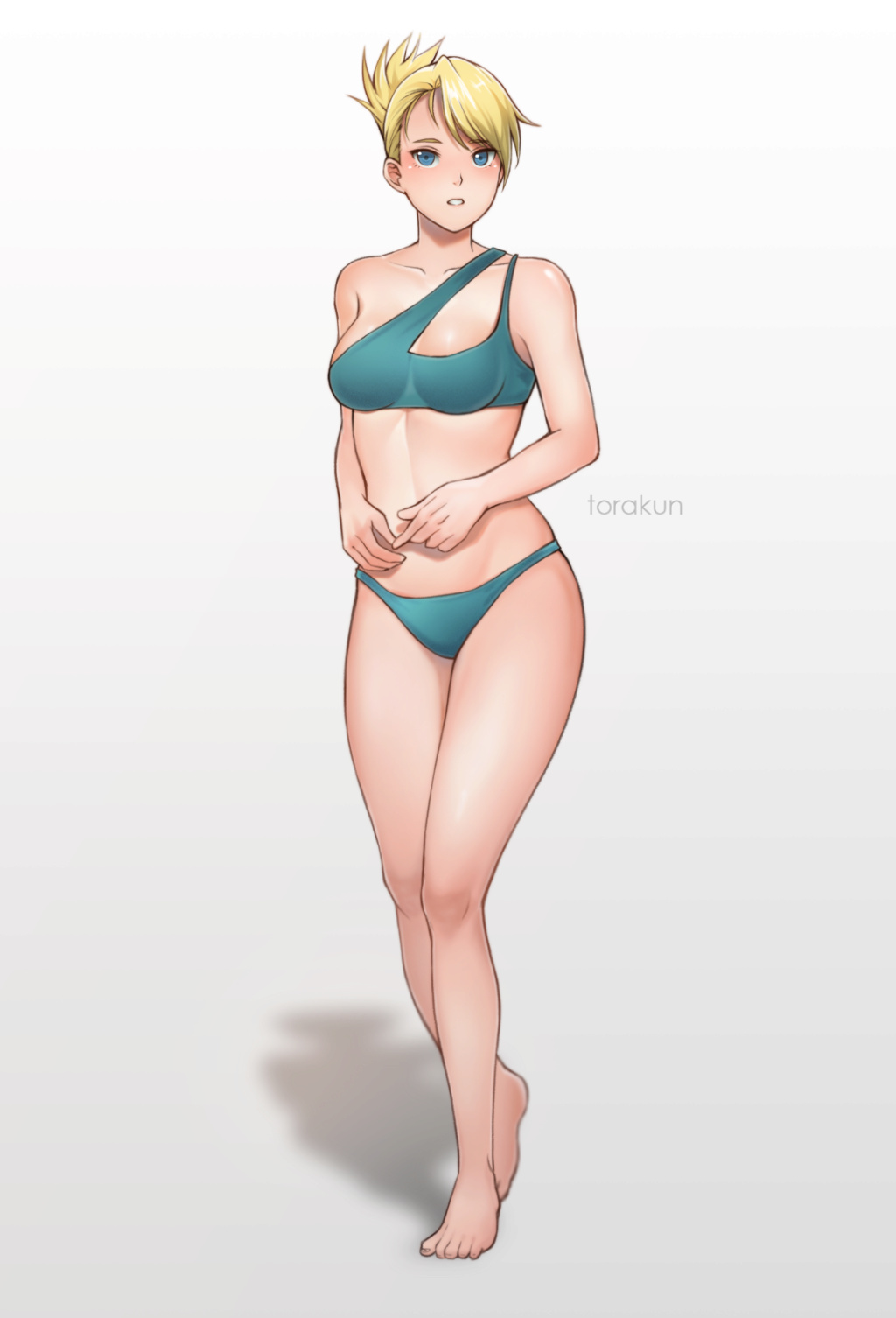 Once her music stopped, she settled in her corner, doing some final stretching and looking for her opponent. From what she had heard, Yamato was a talented, and very cute young man, who hadn't had much luck in the ring...heh...well if he was as cute as she hoped, he might get luckier than he thought...
_________________
Check out the recently revamped Roster Page, now with pics!

Yamato was feeling pretty anxious about tonight’s match, to put it lightly. He wasn’t far removed from the humiliating trouncing he’d received at the hands, or rather the feet, of Chloe Mason. The bout had completely exposed him as a foot fetishist, which had ironically enough been just as much a surprise to Yamato himself as everyone watching. He’d suffered embarrassing defeats before, but most of those had been relatively easy to forget. Yamato’s social media mentions recently, however, had made it very impossible to forget this particular defeat.

With all of that, staying focused and confident on tonight’s match was proving a nearly impossible task. Making matters worse, it was going to be a Hardstyle Hentai match against Riza Hawkeye. He had seen her bouts with Army Rodriguez, and had thoroughly enjoyed watching them. This woman clearly had a ton of skill in the ring, and was drop dead gorgeous to match. Deadly combo, one that didn’t bode well for Yamato’s odds tonight, especially given Riza’s impressive performances in recent matches like this. He was clearly the underdog by a huge margin, but giving up on himself before the match even started wouldn’t do anything to help that. Yamato just had to go out there, give it his best shot, and hope for the best. Reassuring himself with that, he was able to relax a bit by the time his music hit. Putting on a smile, he stepped through the curtain and gave a wave to the crowd before marching down to the ring. Yamato tried to keep his attention off the crowd as much as possible, knowing there would be several who would likely try to tease him over what Chloe had exposed. The only one who managed to thwart his effort was a pretty woman in the front row, who had kicked off her shoes and “casually” rested her feet up on the barricade right as Yamato had been coming around that way to get to the steps. It had been impossible not to steal a glance, and he could hear her snickering as he tore his eyes away and entered the ring.

Taking another deep breath, he looked Riza over. She looked stunning in her bikini...and once again his eyes couldn’t help but wander down her beautiful legs to her exposed, bare feet. Whether she had chosen to wrestle like this tonight specifically to take advantage of his little fetish or not, it was going to be a distraction, that was just unavoidable. Still, Yamato did his best to ignore it, bringing his eyes up to meet hers while he stepped out to the middle of the ring, offering a hand.

In truth, Hawkeye didn't really know all that much about Yamato's recent humiliation and public exposure of his foot fetish. She had heard some fleeting comments, jokes from other wrestlers, but hadn't really paid all that much attention to it. She was still somewhat new, despite being back for a year now, and hadn't really interacted with that many people aside from Army and Hayasui, so she wasn't really familiar with the local gossip, though frankly, the reactions he was getting from the crowd, and that one woman near the front, told her all she needed to know.

She crossed her arms, noticing how nervous he seemed, and how his eyes trailed to her feet...yep. Fetish confirmed. Using that. How could she not?

"Hey there. Yamato right? Call me Riza." She said, offering him a genuine and kind smile. "No need to look nervous. I'm not here to make fun of you or anything. This is just a match. Just a fun, pleasant, match where we can give each other some fun, no strings attached pleasure."

Seduction may have been new ground for Riza, but if anyone had told Yamato that he wouldn’t have believed it. The pleasant voice telling him about all the “fun” they’re going to have, the way she put her gorgeous legs on full display while approaching him, and then the way she talked while giving him a massage…

“Oohhh…” Yamato let out, initially tensing at her touch, but very quickly finding himself relaxing. There was absolutely nothing smart at all about letting his opponent get behind him like this when the match was just about to start. But her hands felt irresistible right now. “I, uh, don’t know about all that…” he answered, hardly even paying attention to the words coming out of his mouth.
_________________
LARIATO'S LOCKER ROOM