Maybe Mia had some character to her, and her Mustang persona suited her really well, but something only the people who really knew her in detail could know was that the brunette was actually quite diligent and hard working. Free spirit and indomitable, but also really determined and  laborious when she focused on something. She had gone over her debut’s recordings several times, taking notes of her highs and her lows and learning how to react to different strategies from her oponents. She had been in the AFW for only some weeks and just one match, but with every experience came learning, and she was wiser and more proficient now.

Mia stood up and started her warming up routines while going over the details for her upcoming match. She had heard from her agent that her rival was in fact a budding talent in the wrestling world. This mysterious woman was just about to debut in the AFW, but she had to be a skillful wrestler because the AFW scouted her. No matter what, the Mustang was in for a challenge. She wouldn’t take it otherwise, she liked the thrill of a fair fight.

When she was done stretching Mia made it backstage where she waited until it was her turn to get on stage. Her entrance theme started and the arena’s ligst dimmed with the exception of the white and red spotlights. A wild horse’s neigh was her cue to start her walk. The Mustang was loose again. While she was walking to the ring Mia noticed how the crowd was actually reacting quite well to her. Her first match hadn’t been perfect, but she had shown her colors and her fighting spirit and the respectable rewarded that. The people liked her character and gave their approval in form of cheering, and she had to show some respect to that so when she made it to the ring she hopped on every corner while making a gesture at the people rooting for her. Then she leaned back on her corner, waiting for this rival of her to make her appearance.
_________________
BEHOLD MY ICY FORTRESS 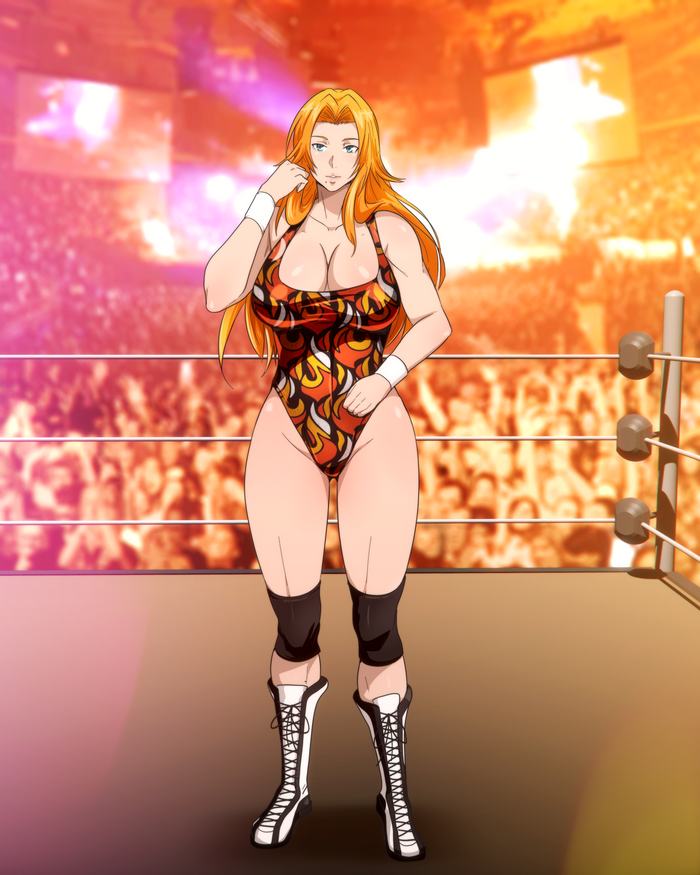 Moments after Mia’s music faded out, a new, unfamiliar song began to play over the speakers, and Hiroko Matsumoto stepped out onto the Friction stage for the first time! The rookie, wearing a singlet decorated with flame patterns to match her orange hair, smiled excitedly while striding down the aisle toward the ring.

Though the crowd’s reception for her was moderate compared to Mia’s, largely because Hiroko was essentially a complete unknown going into this bout, that didn’t at all diminish the fiery new girl’s joy at having the opportunity to compete on the biggest stage in the sport! And her opponent was relatively new as well from what she knew. Neither woman would have much of an idea of what to expect from the other, and something about that only heightened Hiroko’s excitement!

Entering the ring, she moved out to the middle of the ring and extended a hand to Mia. “Hey there! My name’s Hiroko. Just wanted to say good luck, and let’s have some fun tonight.”
_________________
LARIATO'S LOCKER ROOM

Mia rested on her corner as her rival made her way to the ring. Even from the distance the Mustang was able to notice how this blonde was bigger in frame than her. The woman introduced as Hiroko Matsumoto by the announcer was a rookie herself, so Mia decided that she would have to make an advantage out of her experience in wrestling. When the blonde stepped inside the ring Mia got a confirmation to her suspicions: Hiroko was way bigger and heavier than her, with a curvaceous yet muscular body. Physically overpowering this rival was completely out of the question for Mia, so she would have to make use of her wrestling knowledge and experience in order to try getting the victory home.

At least her rival looked polite and friendly enough. Mia felt a little bit reassured when Hiroko friendly introduced herself and went for a handshake. She didn’t like when bigger women were vicious, so having a gentle rival was what she liked most. After all, even in competition one could find some camaraderie, as it happened to her in the past. The Mustang accepted the handshake. “Hey Hiroko, I’m Mia. Sure, let’s have a good match tonight. Ready whenever you are.”, she nodded at her rival, signaling her being ready for the match’s beginning.
_________________
BEHOLD MY ICY FORTRESS

Hiroko quickly made note of her size advantage once she’d entered the ring and had taken a closer look at Mia, though this was nothing new for her. She had almost always been bigger than most other girls, it was just something Hiroko was just used to at this point. It was almost a given her strength would be the key for her in this one. Mia’s talents were a little less obvious just by looks alone. Maybe she was a speed demon high-flier, or maybe her style leaned more toward the technical side of things. That was something she’d have to learn and try to adapt to on the fly. One thing she could confirm was that Mia seemed to be a nice girl. Hiroko smiled and nodded while they shook hands, then backed away as the ref called for the bell!

And the match was under way! Hiroko began a moderate, rhythmic clap with her hands for a few seconds until the crowd took it up and began to do the same, then she waved a hand up through the air in time with the claps, encouraging them to keep it going. Then she brought her hands in front of herself while approaching Mia, wanting to try to lock up with her. But, figuring an attempt to grapple for positioning might favor her opponent’s style more than her own, Hiroko elected to bring her power into play right away. If Mia locked up with her, then right then she’d immediately try to drive the woman straight back until they were up against the ropes, hoping to stop whatever she might have planned before she could start it.
_________________
LARIATO'S LOCKER ROOM

Mia smirked to herself when she noticed her rival rallying the crowd before the match. She rested with her hands on her thighs as she made sudden move with her neck to get her hair out of the way, clearing the view. The Mustang wasn’t sure why but she liked that rookie’s attitude, the blonde acknowledging the crowd even as the match started, exposing herself to a surprise strike. She wouldn’t do that, not after that good will Hiroko had shown.

Of course it had to eventually come to an end, and Hiroko’s made a serious face while reaching with her hands at Mia, inviting her rival to some test of strength. It was an obvious start coming from someone who was way bigger and heavier than her opponent. Mia accepted, though. It would have seen as something disrespectful to start a match with a treacherous strike and the Mustang also had a plan of sorts. As she intertwined fingers with Hiroko the difference in strength between them became apparent as she was being pushed at a steady pace. Mia didn’t want to get pinned between her rival and the ropes, so she went for a surprise. Suddenly she ceased her struggling, falling on her back in an attempt to take Hiroko down with a monkey flip.
_________________
BEHOLD MY ICY FORTRESS

Mia accepting Hiroko’s test of strength despite being at a clear size disadvantage was a tactic that on its own would typically be classified as either very brave or very foolish. As for Hiroko’s opinion, she’d guess it was likely more a sign of the former than the latter. Neither woman was a veteran in this league by any means, but Mia moved and acted like she knew what she was doing. As it turned out, she really did.

Hiroko’s effort to drive her foe back seemed to go flawlessly, for the first couple steps anyway. But then suddenly Mia fell back, and the bigger woman found herself getting flipped straight over, coming down onto her back with a crash.

“Ngh! Not bad…” she grunted. If Mia wasn’t already capitalizing on her counter by then, Hiroko would roll onto her front and try to push herself back up to her feet as quickly as she could.
_________________
LARIATO'S LOCKER ROOM

Mia smirked when her rival accepted the test of strength. It was easy to trick bigger rivals like that given her smaller body frame and lighter body, but most of her opponents tended to underestimate the bursts of strength the Mustang was capable of, and also the ruses she had learnt, the tricks to make things even against bigger opponents.

The monkey flip worked perfectly and sent Hiroko to the mat, but Mia had to admit the woman had some resilience to her. Instead of remaining staggered and leaving a window of opportunity for the Mustang to keep going the blonde immediately went on her feet after taking the blow as if saying: “It won’t be that easy.” Mia would need another tactic, but her mind was already working on a new one.

The Mustang would wait close to her rival until Hiroko would stand up again, then she would throw a kick to her groin to leave her open for a powerful DDT maneuver that would send the blonde head first to the canvas.
_________________
BEHOLD MY ICY FORTRESS

Making her big league debut against a capable opponent, there was no doubt going to be a handful of valuable lessons for Hiroko to learn tonight. Here was another: If a smaller woman invites you in for a test of strength, they probably have a trick up their sleeve. That bit of hindsight wouldn’t help her much now, but it was something she could be mindful of in the future. Failing to consider it now had gotten her flipped over, and it seemed Mia had more in store for her.

Hiroko had just made it back to her feet when her head was shoved under her foe’s arm, and then promptly spiked right down onto the mat with a DDT! “Ugh!” she grunted out at the painful impact, before rolling over onto her back, squirming on the ground while her arms rested over her aching head.
_________________
LARIATO'S LOCKER ROOM