Strategy and Style: Agile and swift whilst remaining in nigh constant movement until otherwise impeded by substantial damage, bordering on critical. Extensively trained in stealth and evasion tactics to compensate for a physiological subpar defensive musculature. Offensive capabilities rely on her precision strikes, aerial momentum, and talent in chokeholds involving her lower extremities. Though has occasionally shown a slight aptitude for strength based takedowns, and a feral savageness when pushed to the brink. Further analysis is to be conducted upon her return to base…

1) PSYCHO STING - Applied whenever a hostile target is sprinting straight towards her and she’s capable of lifting them into the air to some degree. Dahlia hooks her arm underneath her target’s and hoists them upward before lifting up her leg and cracking them in the jaw with her knee.

2) DELTA DESTROYER - Aforementioned example of Dahlia being capable of summoning enough strength to uplift opponent’s twice her size if necessary. A prone target will be embraced by Dahlia from behind and hauled overhead to implant them upon the canvas in deadlift bridging German Suplex.

3) SILENCER - Applied whenever a hostile target has floored Dahlia and is within range of her lethal legs and the taut strength hidden within. Dahlia will clamp onto their hair and tug their head between her legs and apply a constricting headscissors not usually known to win her matches, but saps their strength greatly.

4) SPIRAL ARROW – Executed when perched atop a corner turnbuckle with her vision honed in on her target. Dahlia shoots forward imprints the soles of her boots into a target’s chest, and implemented with a spinning rotation for increased velocity.

5) SHADOW STRIKE - Dahlia sprints forward at considerable speed to perform a leaping knee strike mashed against the bottom of her target's chin. Difficult to dodge given Dahlia's pinpoint accuracy, and known to leave a target incredibly woozy given the shock absorption meant to rattle the brain.

1) PSYCHO STRANGLE - A submission technique honed to perfection after years of application with a nigh perfect record of lulling any hostile target to a state of submissive unconsciousness. Dahlia applies a triangle choke from behind or in front, and employs substantial torquing pressure on their cranium to restrict blood flow to their brain. Entrapped victims are sometimes known to not awaken for several hours.

2) EXECUTE - Dahlia employs her naturally athletic nature to perform a finisher partially inspired by her flamboyant sister. Accomplished by Dahlia climbing the nearest turnbuckle or whichever structure is available, and then launches from atop it to land straddling upon her target’s shoulders and flip them backward into a dragonrana. Concussively slamming the back of her target’s head into the floor whilst she remains mounted atop in a schoolgirl pin, sometimes with their legs rolled up as well.

**The following maneuver is one Dahlia has only recently been modified to be utilized in non-lethal combat. Unlikely to be used except in the most dire of situations.**

Access Allowed:
3) DCM (Defensive Counter-Maneuver) - Formally deemed unsanctioned for usage outside of covert operations and only when all other offensive options have been exhausted. Dahlia utilizes what's left of her adrenaline to preform a jumping knee strike that momentarily mounts her on her opponent's chest, but with enough impact to launch her targets upwards as she somersaults back to the ground. Upon landing, she draws her daggers (if available) before leaping up towards her foe, quickly delivering a series of slashes or strikes from multiple directions before slamming them into the ground with a booming gut punch. Dahlia will be completely drained afterwards and incapable of fighting onward 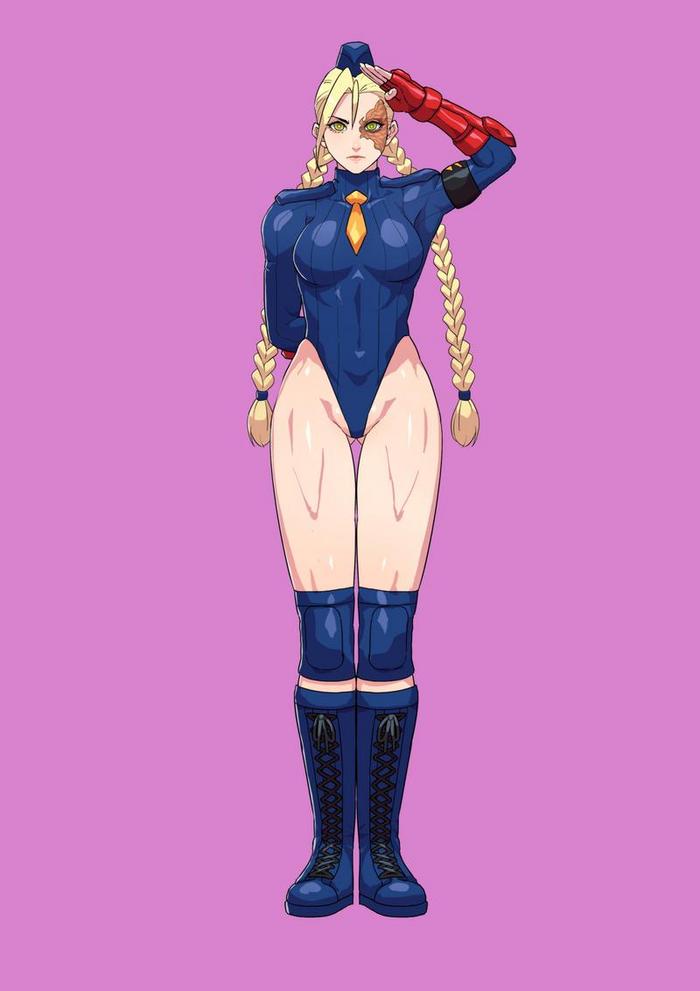 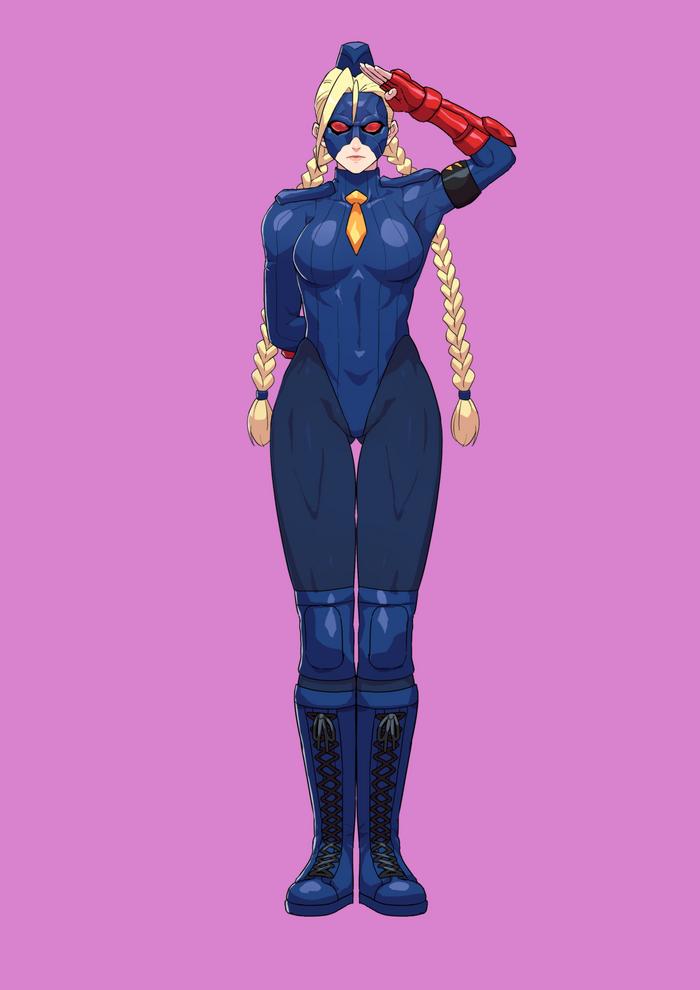 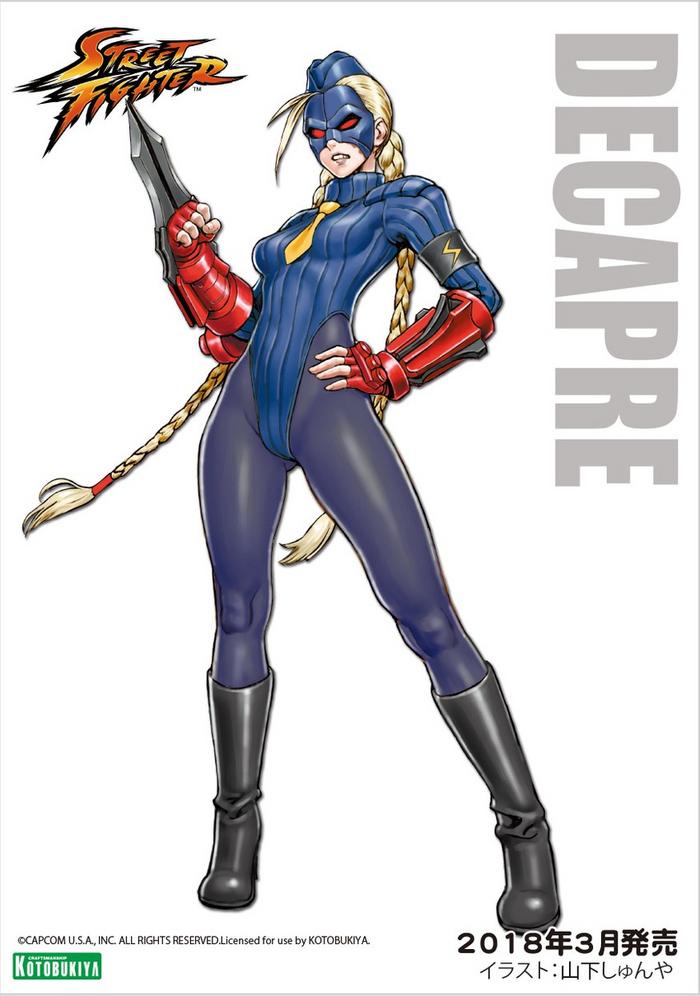 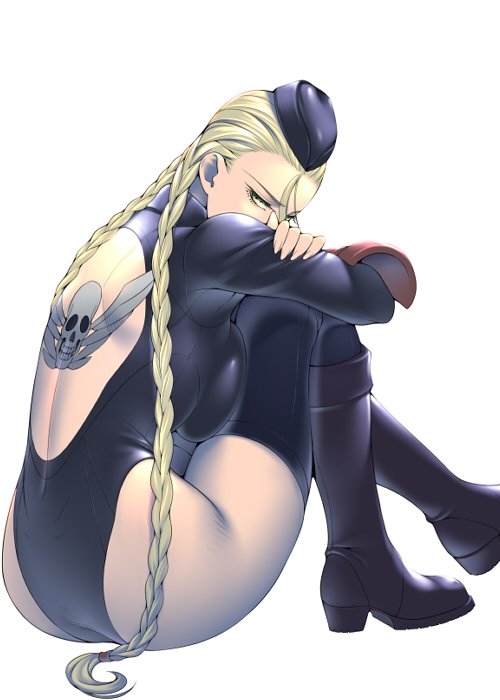 **The following memories may or may not be fabricated. Alpha Level clearance is needed to verify.**
Supposed Childhood Memory Of Youthful Merriment While Being Cared For By A Compatriot Of The President… 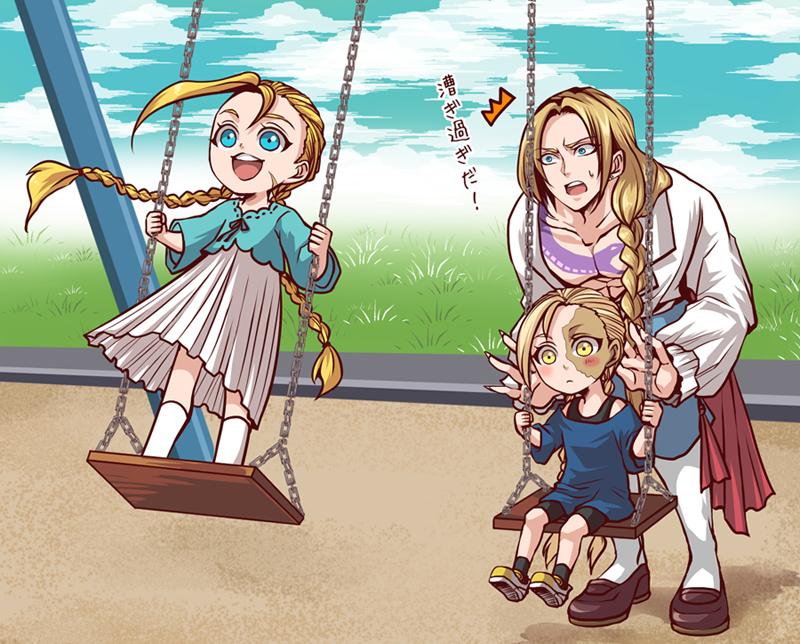 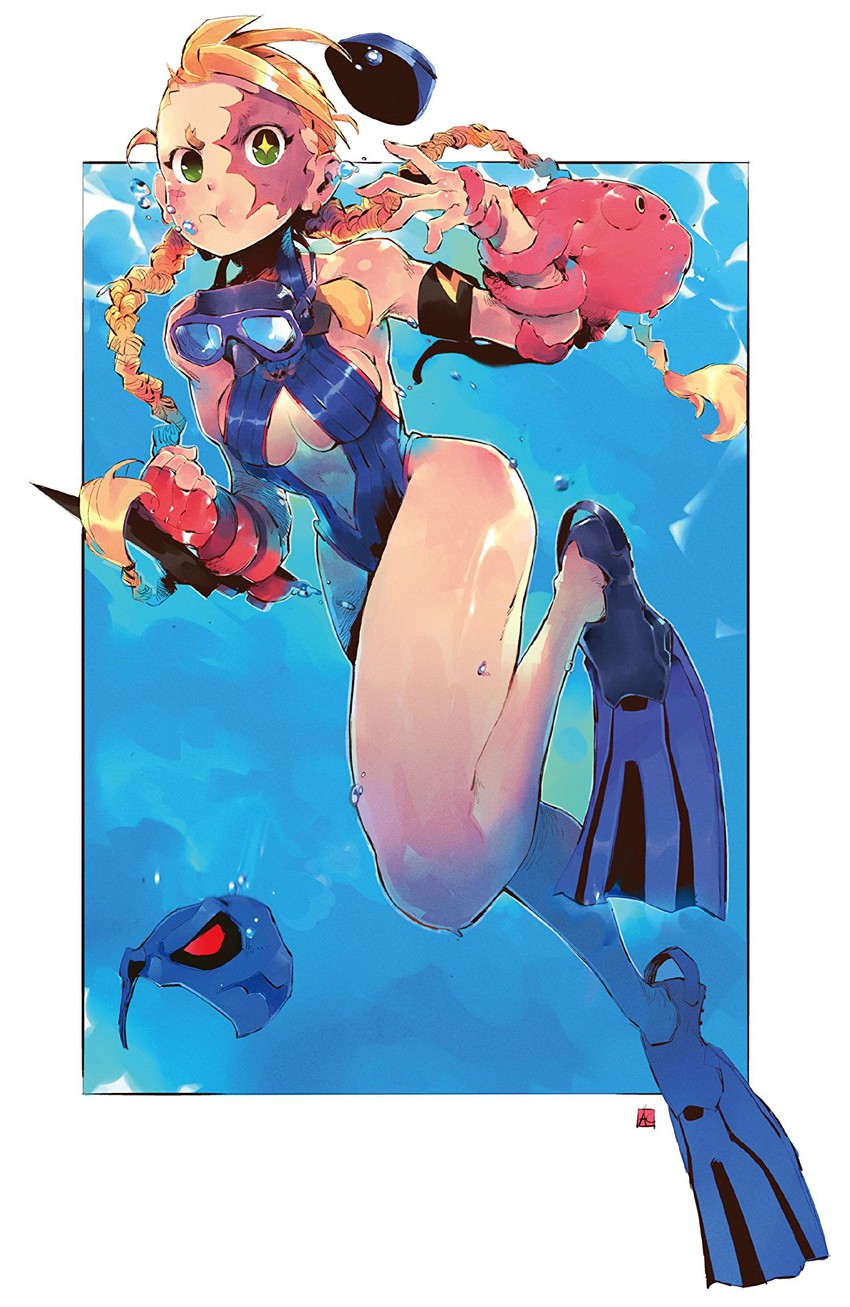 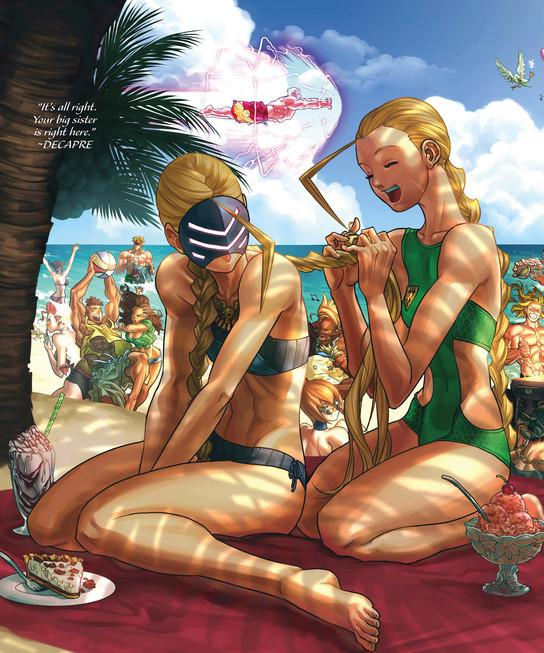 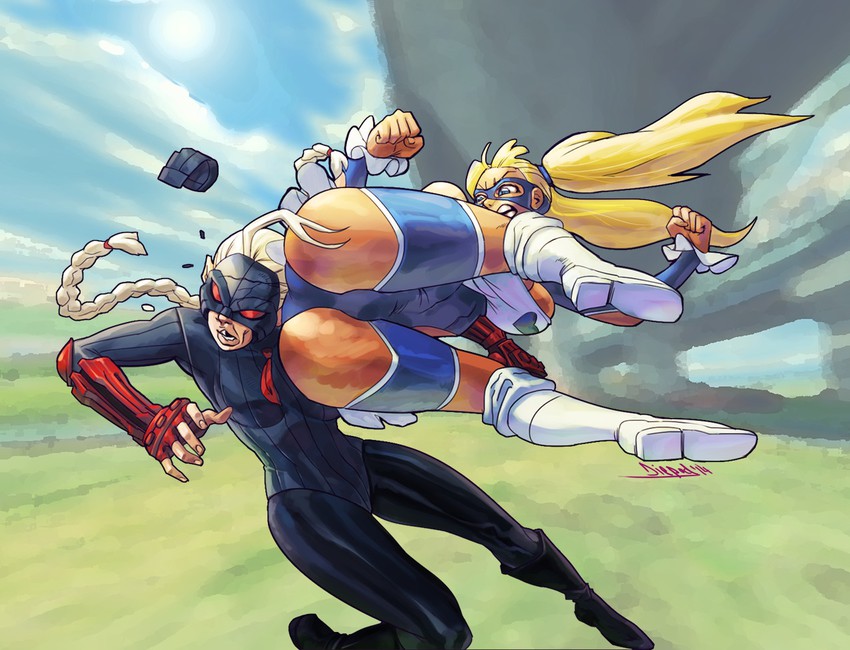 Personality: Subject is known to be of prolific temperament when agitated beyond her innermost limitations, but is otherwise taciturn, reserved, and withdrawn under normal circumstances. Driven to succeed and improve herself and her fighting potential by any means necessary for the primary intentions of accomplishing whatever covert operation is assigned to her. Extremely well-disciplined and a sterling example for other agents to aspire to…

…although her disposition softens considerably when she is in proximity of her twin sister, Camilia. Becoming bashful with elevated heart rates when her sibling begins doting on her in a motherly fashion. Being members of the royal family prohibits authorities from penalizing such caring fraternization, although a competitive drive still brings them into sparring contention on occasion. His royal eminence insists to allow them such camaraderie so long as this contentious rivalry brings about the best in them both.


Past/History: The People’s Republic of Tanzanellia is a glorious island nation under the stellar leadership of its esteemed Supreme Ruler, Montalvo Espinoza Brumwell. Our glorious leader who is swathed in victorious war medals that shimmer from the brilliant gold glistening from the lapel of his crimson red suit. With his unparalleled willpower, our dear leader has brought Tanzaneillia to the heights of prosperity after having won the last eight elections in landslide victories with all of the other candidates respectfully dropping out or choosing to instead go on…“extended vacations”, from which they will assuredly be missed. And yet in despite his innumerable accolades and contributions to the country, he one day saw it in his heart to think of the nation’s future beyond his own time on this Earth, and decided to sire children of his own to carry on his noble works after he has ascended past this mortal plain.

And so it was, Our Dear Leader had gifted the world with twin daughters, Camilia and Dahlia. Special procedures were taken to maintain the absolute secrecy of the identity of their mother who has since disappeared. Although it was a joyous occasion indeed, one of the children, Dahlia, was inflicted with a rare birth defect that has left permanent scarring of the facial tissue. It was therefore decreed that Dahlia was not to be shown in public without a special mask to hide her shame, and excessive care and nurturing was showered upon the beauty of the nation, Camilia. Dahl admired her sister from afar, who showered the scarred with affection and endearing devotion from as early as she can remember. Although Dahlia pined to one day be just as treasured and loved as she was by everyone in the nation…she knew that her precious sister was one who needed to be protected, and that she needed to earn her right to be a part of the royal family. Enrolling within the nations military under an alias ensured she’d receive no special treatment, although none could have foreseen her catapulting ascension within their ranks. Dahlia even opting to willingly subject herself to experimentation to increase her physical capabilities, but had the unforeseen side-effects of distorting long term memory. Eventually, she had taken on the role of their Number One Black Ops agent, embarking on numerous successful covert operations when not serving as her sister’s personal bodyguard.

It was against Dahlia’s better judgment to allow her sister to embark on such a unpredictable and hazardous journey as joining a Japanese wrestling league merely to bring honor and glory to their nation, but she was rarely capable of talking Camilia out of her mirthful ventures once she set her mind to them. So to assuage her worries, Dhalia joined right alongside her sibling, to keep a closer eye on her and perhaps test her espionage combat mettle against some of the better grappling competitors in the world.

Dislikes:
-Losing To Her Sister
-Dolls
-People Who Stare At Her Scars
-Winter Weather
-Father

Fun Facts:
1) Dahlia’s fondness for the Summer weather and crashing waves stems from her family having their own private beach. One of the few places where she felt comfortable unmasking herself as a child, and where she and her sister had their fondest playtime memories.

2) Although hesitant about embarking with her sister on this expedition of hers, Camilia mentioned the prospect of living in a land where she was not authorized to wear her mask at all times...and the mere thought alone enticed Dahl more than words could say.

Timeline: - Rearranged to be in terms of storyline order
1)