Raquel was a bit nervous but she felt ready. She had wrestled in a lot of places but her old promotions were regional covering parts of the US and Canada. This was the biggest stage she ever set foot on and she was not going to disappoint. Raquel was a bundle of nerves as her music began to play and the excited rookie came bursting out into the arena!

Raquel was in a full sprint, pumping her fist and pointing at the crowd as she rushed down the ramp jumping up in a single leap from the ground up onto the apron! She struck a couple poses on the apron, running her hand through her hair seductively to tease the crowd a bit before grabbing the top rope and vaulting over into the ring. She strut about the ring with her arms held out taking in the modest cheers the debuting wrestler received from the crowd.

Soon she was to settle into her corner and await the arrival of her opponent. Raquel was doing her best to keep her excited nerves under wraps as she wondered who it was she would face.
_________________
"The Amazon" Alaina Sanders-Friction
Suzumi Ishikawa "The Tsunami"-Friction
Peggy McIntyre-Friction
Hikaru Sawazaki-Friction
Rosa "Crusher" Cabrera-Friction
"JJ" Janella Johnson-Friction
Raquel Masters-Friction
Lauren Fredericks-Friction
TAG TEAM
The Irish Amazons

Clover rose was in the back as she waited to called out by the ring announcer. She was told that her opponent was gonna to be a debuting wrestler named Raquel Masters. She didn't know the single thing about her but that is going to stop her from trying doing her best and giving it her all to win!

Clover hears the ring announcer ring calls out her name and entrance theme song: Turn it up by CFO$ and that was her cue. The brunette walks from the back to the entrance ramp, receiving a loud pop from the fans as soon as they saw her. And those would get louder as Clover strikes a pose while pyro goes off besides her. 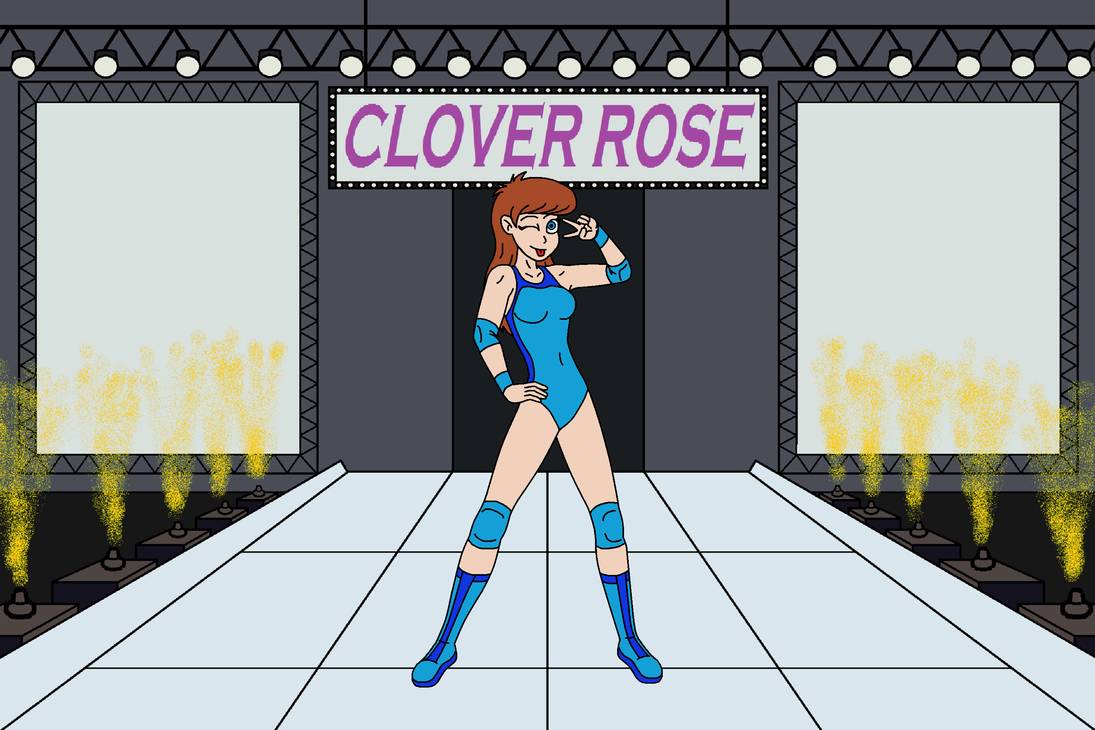 Once the pyro dies down and Clover would finished, she began to walk down to the ring. Giving the fans high fives along the way. She makes to the ringside arena before climbing up the steel steps and enters the ring through the middle rope. She waves to the fans which they waved back before turning around her attention to her opponent.

"Whoa....." Clover lets out as she see her opponent, Raquel Masters....and especially her rip abs and muscle. Clover was a totally masochist for muscular people, their big strong arms to crushing Clover's tiny body usually turned the brunette on, through they were usually much bigger than her and Raquel seems to be about her height and weight but Clover didn't care big or small as they had muscles and crushed her with them only thing that matters to Clover as she continues stare at Raquel's ripped abs while blushing.
_________________
https://afwrpg.forumotion.com/t20147-double-t#541628

Raquel saw the reaction of Clover Rose and was a bit thrown off. She was expecting a bit more intensity and a bit less.... leering? Raquel nodded to Clover and bounced back and forth on her feet clearly ready to get the match started up.

As soon as the bell rang Raquel rushed in, spinning around and kicking out trying to hammer Clover across her abdomen with a spinning mid-kick! Raquel was looking to start off with a fast strike to try to disorient or double over her opponent to set up something else. Start small, chip away and then hammer with the big stuff.... that was Raquel's gameplan going into the debut.
_________________
"The Amazon" Alaina Sanders-Friction
Suzumi Ishikawa "The Tsunami"-Friction
Peggy McIntyre-Friction
Hikaru Sawazaki-Friction
Rosa "Crusher" Cabrera-Friction
"JJ" Janella Johnson-Friction
Raquel Masters-Friction
Lauren Fredericks-Friction
TAG TEAM
The Irish Amazons

Clover was a bit distracted when she was looking her opponent ripped abs and didn't quite the bell rang which allowed the opponent that she was checking out to hit a spinning mid kick into Clover's abdomen.

Raquel was here making her debut and after a quick kick she wanted to come out roaring!  Raquel had a doubled over foe in front of her which gave her an idea.  She leapt up into the air, jumping up to wrap her legs around Clover's head while leaning back, trying to follow up her attack with a hurricanarana!  She was here so impress tonight so she couldn't just be boring with her offense even if something less risky would have been just as effective.

"Yeah! How did you all like that everyone? There is more where that came from!" Raquel would call out after hitting Clover with her hurricanrana.
_________________
"The Amazon" Alaina Sanders-Friction
Suzumi Ishikawa "The Tsunami"-Friction
Peggy McIntyre-Friction
Hikaru Sawazaki-Friction
Rosa "Crusher" Cabrera-Friction
"JJ" Janella Johnson-Friction
Raquel Masters-Friction
Lauren Fredericks-Friction
TAG TEAM
The Irish Amazons

Clover doubles over after taking Raquel's powerful spinning mid-kick to her gut, which allows Raquel to leapt in the air, and wraps her muscular thighs around Clover's head and neck, leaning back and flips Clover onto her back with hurricanarana!

Raquel is clapped her hands and clearly fired up as Clover starts to get up.  Raquel turns and tries to land a combination of fast kicks, aiming one to her abdomen, followed by a second to the back of her leg before leaping up to try to send her to the mat with a dropkick to the upper chest!  Raquel is building steam, and trying to show the world what she is capable of when she really gets going in the ring!

Slowly but surely Clover was able to get back to her feet, only to met by combo of kicks to her abdomen from Raquel, then followed by a dropkick to her chest and sending the brunette on the mat. Clover grunt very low as she struggling to get back but to no avail was easy picks for her opponent.
_________________
https://afwrpg.forumotion.com/t20147-double-t#541628

Raquel hit the kicks and capped her flurry with a dropkick managing to send Clover to the mat. Raquel was trying to really get rolling, and she pulled Clover up by the arm, trying to hook both of her own arms underneath those of Clover. Raquel was planning on lifting Clover up and sending her crashing back down to the canvas with a double underhook suplex to add a more impactful move to her string of offense against her debut opponent. Raquel was looking to be as dominant as possible to make a mark for herself in AFW!
_________________
"The Amazon" Alaina Sanders-Friction
Suzumi Ishikawa "The Tsunami"-Friction
Peggy McIntyre-Friction
Hikaru Sawazaki-Friction
Rosa "Crusher" Cabrera-Friction
"JJ" Janella Johnson-Friction
Raquel Masters-Friction
Lauren Fredericks-Friction
TAG TEAM
The Irish Amazons

"Ugghhh......" Clover groaned lowly as Raquel pulls her up by her arms, then hooks Clover's arms with her own, before lifting and slamming her back onto the hard canvas with a double underhook suplex!