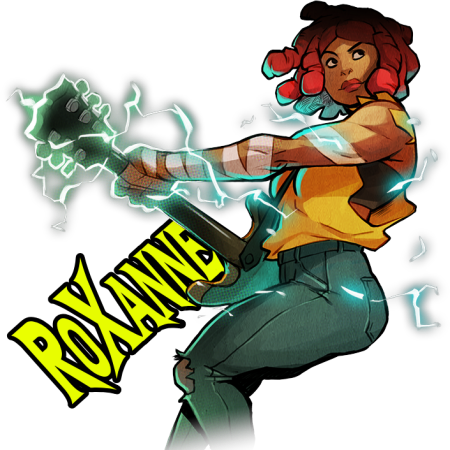 Personality: ‘Rambunctious’ is the word that often comes up when people try to describe Rocky. Growing up poor in Orlando, she grew tired of being bullied in school quite quickly, and developed a very defensive, explosive personality to compensate for her lack of stature. Eager to speak her mind, she doesn’t hesitate to start a confrontation, even with someone who could flatten her in one punch - she’d sooner end up with a bloody nose than ever back down.

That being said, she does have her softer moments, particularly when it comes to her music. While she can be a dunce in many areas, she has a natural affinity for music that borders on the spiritual, and puts all of her heart and soul into the craft. Once she starts on a project, she attaches herself to it with a laser focus, making her an easy person to collaborate and work with, if a bit demanding at times. She also has a soft spot for Blaze, who she looks up to as an older sister, even if she does somewhat resent being referred to as the older woman’s ‘sidekick’.

History: Rocky was born the daughter of a waitress  and a frequently unemployed hustler, not exactly a life with high prospects. Her time with her parents was rare growing up, and she spent far too much of it out on the streets, hanging with the wrong crowd, getting into things she didn’t have any business getting into. A good child at heart, she lacked direction, didn’t have anything of value to put her focus on.

Her uncle came along and changed that. A bouncer at a local bar, her mother had her come over and help him with some odd jobs around the place, cleaning up, just to give her something to do in her free time. It was here that she was exposed to a wide range of music, sampling something from the myriad of bands that came through the place, and over time it all began to rub off on her. She found herself listening to music more and more in her free time, learning the history of it, familiarizing herself with it, and over time she even found her instrument of choice - the electric guitar. After saving up for a year, she was able to afford a Stratocaster - used, mind you, but in remarkably good shape. It was her pride and joy, and she learned how to play it proficiently all through high school, often at the cost of her school work, believing that her musical talents would be all she needed to get by.

It was around this time she came across Nadine Sinclair, an upperclassman at her school who was pretty much the coolest woman she’d ever met. When word went around that she was looking to start a band, Rocky joined up without a second thought, eager to play the blazing brunette, and become Bare Knuckles’ lead guitarist. Though the band fell apart after Nadine graduated, she and Nadine stayed in touch, and when word got out that she was looking to put the girls back together and go on tour, she joined without hesitation, and when the group was invited to join up with the AFW, that was an equal no-brainer. Wherever Blaze goes, Rocky is never far behind.

+While she’s not a wrestler, Rocky is a half-decent fighter, deceptively so for her size. She’s capable of backing Blaze up if she has to, fighting in a way that makes use of her height to stay low and avoid taking hits, while she uses improvised weapons to smack her distracted enemies around. She calls her fighting style ‘Kitchen Sink’.

+As much as she loves hanging around Blaze, she is a little resentful that the guys tend to flock to her whenever the brunette is about. One guy even made the mistake of asking if she was old enough to be in the club they were attending. They never did find his missing tooth.