Meat Tenderizer: Xenia will put her opponent ina  camel clutch and after they are worn out punch them in thr throat to make it even more unbearable.

Sweet Tooth: Xenia uppercuts her opponent and then turns get them in a reverse headlock and drops down on her butt, slamming their head and chin into her shoulder. 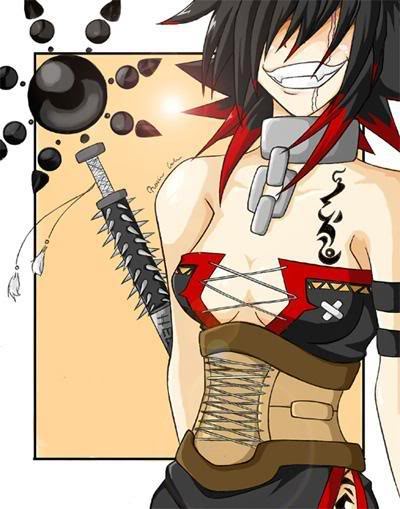 Personality:
Xenia is about as deranged as she looks. She is boisterous, rude and crude and often has a short temper. Though it's a short fuse, she usually forgives and forgets just as quickly. She often shifts between jovial and angry, One minute teasing you with a friendly noogie and the next putting you in a headlock meant to painfully choke you. She's aggressive and demanding, but she means well. She's not afraid to tell it like it is but is deep down a good person. She hates stupidity and fooling around and when people aren't doing their best. She always tries to give 100% in everything she does.

She's pretty chatty as well and likes to talk and socialize and be around people. Unfortunately her scary looks and demeanor usually drives people away. She takes things as they come, able t shrug off pretty much anything. If she goes quiet and becomes unresponsive and ignores you, that is when it is time to run. When Xenia becomes this way, more than likely there is bound to be a bad ending.


Past/History:
Xenia was born to a rich Swiss chocolateer and an unknown woman of low social standing. Despite this, the man tried to raise Xenia as his own son with his wife and their children. The chocolateer made some bad deals and because of this he became indebted to criminals. Times were tough but the family still lived in luxury. Xenia was taught the proper ways of chocolateering and though she was never meant to inherit the business, she took a liking to cooking in general and knew from an early age that she wanted to be a chef.

The situation remained worse and to make Xenia's father try and pay the debts he owed, they began to threaten and blackmail them. They threatened to expose that Xenia was an illegitimate child of a whore, which would be too much a scandal for the prestigious and many generationed chocolateer. Because of the circumstances, Xenia's step mother had ended up committing suicide, leaving a long and lengthy note that blamed Xenia more than anything else. She couldn't bare to see her fortune and fame taken away from her because of some bastard child that wasn't hers.

Xenia's father became abrasive to Xenia, accepting what his wife spoke as truth and spurning her. During a family trip to Germany, Xenia's father arranged for an "accident" to have Xenia taken out of his life. It was designed to kill her but she lived. She ended up alone and broken as a young girl in Germany. She found her way through sheer will to the underground where she was forced to do horrible things juts to survive.

While there, she met Lukretia Von Cruezfeldt who had ended up in similar circumstances. After numerous fights against one another and together against others, they developed a rather deep friendship. After they both got out of the gutter, they parted ways for a few years. Xenia went on to be a culinary genius but her rather unorthodox style kept her from achieving stability. After meandering around various kitchen's in Germany, she was found again by Lukretia. The two picked up practically where they left off and Lukretia immediately hired her on as her head chef.

Fun facts:
-Xenia has a club like in the picture and carries it around when she can. it is her meat tenderizer. She she does, in fact, use it as intended.

-Xenia got the scar on her face from her first fight with Lukretia. She won that fight.

-Because of Lukretia's own personal tastes, Xenia has become quite good at making German food. However, desserts, chocolate in particular, is her real specialty and she has a fiendish sweet tooth.

Wins:
Vs. Hinata Buriteri via Submission.