Finishing Moves:
Bang Bang Baby: Violate launches a loud slap to her opponent's face and turns the slap into an elbow to the throat after it connects. Depending on how they move forward or backward after that, she will bring them into a DDT or lift them into a sidewalk slam. 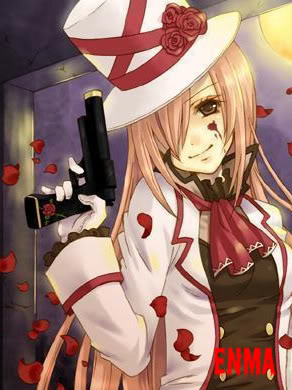 Personality:
Violate likes to keep her motivations a secret. She usually tries to charm and beguile people and act in a manner that makes them feel comfortable, yet still is flamboyant and unpredictable. She is the epitome of eccentric and loves unusual and interesting things.

Despite not being a particularly caring individual, she does like to take care of things, including people. She takes immaculate care of her body. She is very particular about things and likes things done in a certain way. She's also extremely sadistic and likes to use her charms to get people to trust her and then strike at them in a devious manner.


Past/History:
Violate was born to a rich family in Portugal. Though it was a family of high standing, much of the family's fortune came from pretty nefarious dealings. Her father was a ruthless cut throat man who spared nothing for the sake of his fortune. Having a son whom he could groom to take over the family business, He had no use for his daughter when she was born. Seeing her as the perfect opportunity to  pad his assets, she was sold through the illegal slave trade and shipped off to Brazil.

At such a young age, she was raised by a nursemaid of the one who bought her, who was also a rich criminal. The man was German and his grandfather had fled to Brazil after WWII. The nursemaid had been bought and raised in a similar manner by the family and became sympathetic to Violate. She became attached and raised the girl as her own. The man who bought her also had a daughter the same age and her and Violate looked similar.

Taking drastic measures, she carefully plotted to make sure the two looked as similar as possible and before they could really be distinguished from one another, She had the man's daughter taken away and killed and replaced with Violate. The man, who had done similarly with his own daughter as he did with Violate, wasn't able to pick out the difference at first.

However as the child grew, h wondered about Violate and did not buy the excuse that she was dead. Furious, he had the maid executed and was going to do the same to Violate but stopped. It might cause too much of a scandal and bring too much attention to him. He allowed her to grow in the household but treated her with contempt, letting her always know that she was not a real part of the family, even abusing her when he felt like it.

As soon as she was old enough, she was shipped out to Germany where she attended a boarding school. Having no real family in her life, she became quite adept at getting others to like her. Often through lies and manipulation. It had been the only thing she knew in life and she took to it well.

She hated people and took to nature. But she loved toying with people and didn't want to be far from them. These two things brought her into the world of landscaping. She could manipulate nature and bend it to her will and then manipulate and bend the people who owned the homes. It was perfect! She received no money from her 'father' except when it furthered his own agenda of making his family look good.

She set out, using her wit and charms and hard work to set up her own business.Staying in Germany, she quickly began to make a name for herself and soon met a woman by the name of Lukretia Von Creuzfelkdt. Finding the woman interesting, she worked her magic to gain a contract to work over her lawn.

She earned Lukretia's trust but she wanted more. Such a woman, was someone who she wanted to destroy. It was someone she hated more than anything. One night, she had dinner with Lukretia outside of the manner, using a discussion of the lawn to get her away from the mansion alone. She used her connections to kidnap and rape Lukretia but the results of that evening would change her life. She did manage to succeed, but Lukretia had the will to fight even after the incident and beat Violate within inches of her life.

Surprisingly enough, Violate was taken care of. Lukretia was impressed with the lengths Violate would go to for something as simple as that and the two spoke candidly. Finding out that they had similar backgrounds, Lukretia hired Violate to be her permanent head groundskeeper.

Using their respective connections, Violate was also able to gain revenge on her father and surrogate. Lukretia used her wealth, influence and business skill to bankrupt her surrogate father and ruin his reputation. Meanwhile, Violate was able to arrange an accident that killed her brother, leaving her father with no heir to pass on his fortune to.

Since that time, she has been extremely loyal to Lukretia, acting not only as her head groundskeeper but as a partial consultant and personal trainer.

With Lukretia making her move in the AFW, Violate has come to Japan and enlisted as well.

Attire:
What she wears in the picture.

Fun facts:
-Violate refuses to fly. She isn't afraid to fly, she just refuses to. No matter where she goes, she will only go by car or boat. She says she doesn't like to be too far off the ground.

-Violate always has a gun with her. Most of the time they are not real guns but usually a toy gun or squirt gun of some kind

-Not only does Violate have a fondness for gardening and landscaping she is also one hell of a masseuse and is a competent personal trainer.

-Her middle name is Raisa