Strategy: Kagami's Strategy is to go with what works since she doesn't have a fighting style of her own.
Style: None really but has been in dozens of fights so she knows how to hold her own.
Type:  Striker

Preferred Attacks: fast strikes from her fists to keep her opponent off guard and dazed


Favored moves:  Cats paws - Kagami starts throwing rapid punches at her opponent aiming for any spot that is undefended and keeps this up until her opponent falls down or she runs out of energy.

Finishing moves: This Cat Has Claws - Kagami quickly rushes her opponent and aims a series of quick punches at their head before dropping down and moving behind her opponent before applying a stomach claw on her opponent or if she is angry the claw will be applied to her opponents crotch instead. 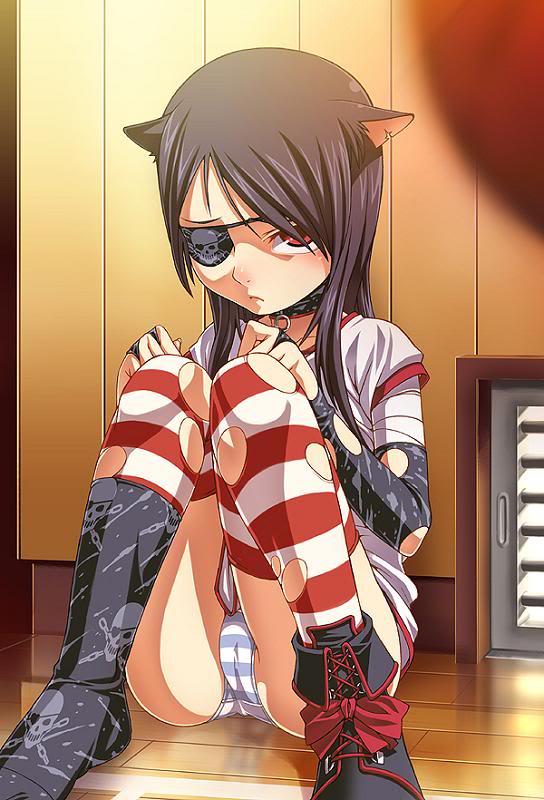 Personality: Kagami is shy and avoids most people as she is afraid they might hurt her. Kagami loves seafood and will even go as far as to steal some right out from under someone's nose. Kagami is an artist at heart and loves to draw in her free time. Kagami however is slowing learning to trust other people but if you act loud or angry around her she might try to slip away and hide. Recently Kagami has been opening up to more people but she is still very shy and she will usually avoid overly loud and aggressive people.

Past/History: Kagami doesn't know much of past and all she knows is that she has had to survive on her own on the streets most of her life. Kagami being very small has been picked on and beaten by mist people she has met and this has caused her to become afraid of everyone she meets. Kagami has always been the subject of stress relief for most of the people she knew as she grew up and because of that Kagami had adopted the style of avoiding everyone and anyone she sees. Kagami's trust is very hard to earn but for the lucky few who do may be some of her best friends and they may even get to see under her eye patch. Kagami heard of the AFW and learned if she joined she would have a real bed to sleep on and money to buy food, So Kagami eagerly signed up even though she doesn't really like to fight.

Wrestling Attire: Kagami wears wears the tattered clothes seen in her picture and she always wears her eye patch and will never remove it even under dire circumstances.

Fun Facts: Kagami usually avoids other people but will never turn down an invitation to go eat. Kagami actually wishes she could make friends but is always to scared to approach other people. Kagami loves to read manga and what she doesn't spend on food Kagami uses to buy new manga and drawing supplies. Kagami also loves draw her own manga which she does in her free time.