Favored moves: Order up â€“ Emi launches a kick at her opponentâ€™s midsection followed up with a powerful haymaker aimed at their head. 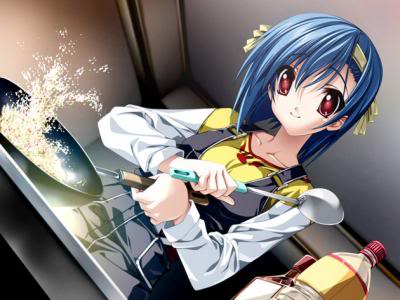 Personality: Emi is a cheerful and happy person who loves to make friends. Emi is near impossible to anger and rarely loses her cool but she will also rarely use dirty tactics and always tries to respect her opponent.

Past/History: Emi grew up living in a kitchen where she was raised learning the ways of the chef but her parents were also very into personal safety and enrolled Emi in military school where she stayed until her eighteenth birthday. Upon exiting the school Emi began working as a chef at a fancy restaurant until she got into a fight with a customer who insulted her cooking. When the fight was over the customer was sent to the hospital and Emi was fired from her job. Emi soon joined the AFW looking for money and wanting to be able to cook again.

Dislikes:
Wasted food
People who donâ€™t like her cooking
People who pick on other girls

Fun Facts: Emi loves to cook and can be found cooking during her free time, Emi will always try to find people to eat her cooking and if no one is around will eat it herself refusing to waste food. Emi is also trained in most hand-to-hand combat because of her time military school.