Strategy: Power moves. Lots of big slams and throws. She's as strong as a bull and likes to show it. Her punches pack a lot of power too, so she'll throw those out here and there. Usually transitions to submissions towards the end of a match to finish a weakened opponent. She can take a lot of punishment, but her weakness is in her speed. She has trouble dealing with faster opponents until she can wear them down to stop their speed.
Preferred Attacks: Clotheslines, powerbombs, strikes, slams.
Preferred Matches: Normal matches, submission matches
Finishing Moves: Dixie Buster, Double Bridge Hold 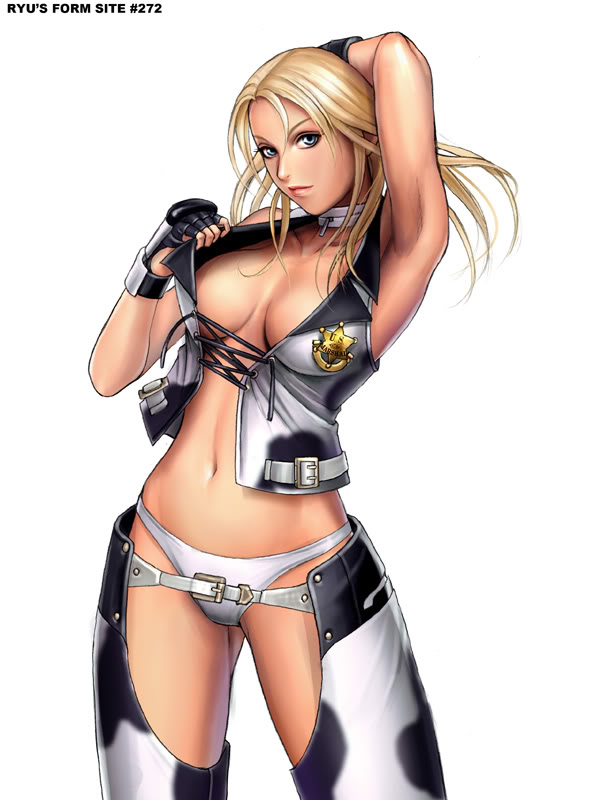 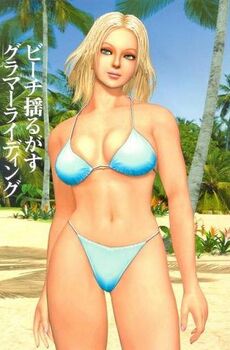 Personality: Energetic, hard-working, stubborn, cocky, confident, friendly. She's pretty easy-going and able to quickly make friends with almost anyone, but she does have a bit of a temper, one that can be set off easily with the right words or actions. She's also something of a showoff.

Past: As a young girl growing up in Texas, Dixie Clemets was described as a tomboy from those who knew her from an early age. Living on a ranch, surrounded by several older brothers, who could really blame her? She had to get tough, and fast, to keep up with the rest of her family. Which, of course, she did. It helped that she had a love of wrestling from a young age, watching it every week with her brothers and her dad. Her favorite wrestler was a woman named Kamikaze Rose, who seemed to live up to her name. She was like an unstoppable typhoon in the ring, both powerful and beautiful, taking out any opponent that dared stand up to her. She entranced the young Dixie every time she came on screen...that is, until the fateful night that Kamikaze Rose died in the ring. There was an accident, a mistake made by Kamikaze's opponent in their match that night, and the powerful wrestler would be punished for it. Dixie and her family watched in horror as Kamikaze Rose passed away in the ring. The young Dixie was traumatised by the event, not able to believe that someone that she looked up to like that could possibly have their life taken away so easily, and so fast.

Dixie was changed by this event. For the next few years of her life, she was quiet, kept mainly to herself. It wasn't until middle school, when she met a young girl named Aisha. For some reason, Aisha was completely obsessed with Dixie, constantly challenging her, picking fights with her, and just generally trying to one-up her every chance that she got. At first it annoyed Dixie, then it started to amuse her. All throughout middle school and high school, the two were constantly at each other's throats. Not just verbal disputes between the two, but many, many physical scraps as well. Her constant feuding with Aisha helped reignite her old enthusiasm and love of wrestling within herself, and Aisha became a punching bag for Dixie to try out wrestling moves on just as much as Dixie was a punching bag for Aisha to try HER moves out on!

Once she reached high school, Dixie began to spend her summers and weekends helping out with her brothers on her dad's ranch. The work made her body tough and her muscles strong, helping her grow into a powerful, well-built woman, but she still had a certain beauty to her as well. This, of course, set off Aisha even more, leading the two of them to fight even more with each other. Eventually though, the end of high-school came, the two women graduating and going their seperate ways. Aisha left town to pursue her own dreams, while Dixie became a member of the city's police force. She spent several years as an officer of the law, earning her the respect of her fellow officers and rising through the ranks to eventually become a sergeant.

It wasn't until one night that she was at home watching TV, that she just so happened to stop on a channel airing a new wrestling program. It was there that she first layed eyes on Reiko Hinomoto, the daughter of Kamikaze Rose, her childhood idol and hero. Her heart skipped a beat. She had known that Kamikaze Rose had a pair of daughters, but she had no idea that either of them had gone into wrestling. Dixie began to think long and hard about what she really wanted in life after seeing this, after seeing Reiko in the ring, and after a few weeks, she had made up her mind. She wanted to not just become a wrestler, but she wanted to fight Kamikaze Rose's daughter. She wanted to meet her in the ring as an equal...no, she wanted to surpass her, to prove herself better than the legacy that her hero had left behind.

She retired from the police force, and made her way to Japan, determined to join this federation that Reiko was in, this Rumble Roses company. It wasn't as easy as she had thought though. Dixie had to start at the very bottom, in dirty, low-level wrestling federations in the country, and had to work her way up. She fought through the ranks until the Rumble Roses sent her an invitation and a contract, wanting her to join, which she of course gladly did. She and Reiko eventually met, facing each other in the ring several times. Not only that, but the two became fast friends with each other, even teaming up several times to form a tag team. Eventually, though, the Rumble Roses federation fell apart. Luckily for Dixie and Reiko though, another wrestling federation was more than happy to hire them..the AFW.

Unfortunately for Dixie, her time in the AFW wasn't as successful as her time with the Rumble Roses. She had some good wins, but she had a great many losses. Eventually, she ended up taking some time off, several months worth, to retrain and refocus herself. She made a stunning debut back to the AFW in a return match against Rainbow Mika, and since then, she's been doing pretty well for herself.

Strangely though, she's yet to run into her friend Reiko since her return...