» Canon characters and pics checker
by BritBrat Yesterday at 11:36 pm

Another day - and yet another match at the AFW was about to begin. A simple, white-and-blue matted ring..the spotlights shimmering, cameras lingering around the area anxious to get a peek at any bits of bare flesh....

Which a certain fuschia-haired cutie would soon grant. Taking her time to walk down the edge of the catwalk - Chelsea presses a hand to her lips, two fingers reaching out to the crowd, and blowing a suggestive kiss - hips matching in suggestive sway as she waves to the crowd - trying to get as much attention as she possibly can...theme music thumping in the background - bass shaking the area ever-so-slightly. Delicate little fingers run down her cut little stomach, before snapping the waistband of her panties, and then giggling again - breaking into a wind sprint - jumping, and practically clearing the top turnbuckles in one full leap - with a bit of clever jump assisting with a single hand against the edge of the canvas. Landing on one knee, she rises to her feet, and leans back against the turnbuckle - one slender, thigh-high covered leg crossing against the opposite one - butterfly bra baring the inner cleft of her breasts - as well as a bit of milky-white underbreast. Letting out a sheepish giggle, she awaits for her opponent - and the bell to ring.. 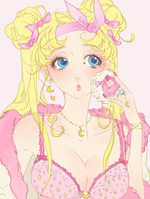 As Chelsea's entrance music died down, Tanith's slowly began. While she wasn't really one to put on a show, she could make an entrance. She walks down the catwalk almost like a model, but at a significantly slower pace. She took slightly exaggerated steps, flaunting her curves as each step made them jiggle some beneath her nurses uniform. As she made it to the ring corner she slowly climbed the stairs to her corner of the ring and ducked under the top rope, giving the crowd a breif glimpse of lacy black panties that transitioned smoothly to her fishnets as she entered the ring. She then strode to the ajacent corner, pronouncing her steps even more and making her rack bounce before pausing and smirking at the crowd. With that she slide one finger into her clevage, then another, and began to unbutton her top. She then pulled it open revaling a very sheer black top, with and overlying fishnet. She then turned and strode back to her corner, letting the other half of the crowd see. As the bell rang she turned to face her opponent, smirking slightly as she shook her hips back and forth, staying in her corner for a few more seconds before moving forward.

Chelsea's pretty little jade green eyes linger on Tanith as she slides into the ring - perhaps a few moments too long. Her eyes remain fixed on her for every second that she enters - almost outdoing her with her suggestiveness. Chelsea leans forward, her hands running down the edges of her thighs to the base of her knees, bending over a slight bit - short little panties digging into the cleft of her hips as she stretches each shoulder with a light shrug, eyes focused on the woman in front of her.

Heaving a deeps sigh from her carnation pink lips, Chelsea's eyes narrow, and she begins to pick up speed - after all, the heartwind was most comfortable with being quick. In front of Tanith - to distract, Chelsea quickly jumps into a handstand, and latches both of her legs around Tanith's neck - trying to use her body weight to bring her to the mat - Chelsea's lingering floral grape scentable as her ankles touch the side of Tanith's neck gently - but firmly..

Though, if she saw the move coming, Chelsea would be in quite a situation..being upside down and slightly off balance!

Tanith watched Chelsea intently, this was he first match and she didn't want to get distracted so early on in the match by the girls beauty. She didn't want to e pegged as a pushover. She wanted to get things done, and if that meant ignoring the girls sensual girlish qualities... well, she would have to ignore them... for as long as she could.

As Chelsea darted towards Tanith, the nurse was surprised at the girls speed, instantly recognizing that this would be a difficult hurdle to overcome. She was neither quick, nor nimble. She barely had time to react as the girl jumps forward to try and catch her neck in a handstand. Moving forward, hands out, she tries to push the girl onto the ground before she could catch her neck. If the girl could resist her push, Tanith would end up stumbling forward and falling on her back under Chelsea's fragrant body. But if she managed to overwhelm the girl, Tanith would push her advantage and try to catch the girl beneath her, straddling her waist and keeping her down.

Chelsea grins as her ankles latch onto the girl's neck - quickly made aware that she had the speed advantage in this fight. However, the push was an unexpected counter to her offense. Chelsea's back bends in at the spine slightly, trying to balance herself in her handstand - but not too well! Chelsea teeters forward, thumping onto the ground onto her back, bottom slightly arched into the air. A curt little "ungh!" ebbs from her lips as she feels Tanith's bottom settle on her back - pushing the wind out of her from the sudden little jerk of her hips against her back..and giving her just a second for an opening!

As Tanith fell onto Chelsea she gave a slight smirk, realizing that she may just be able to finish this match off early. Reaching down, she attempted to trap Chelsea's legs in a reverse grapevine, spreading them apart as she sat on her in a reverse cowgirl position. Then supporting herself with one hand, strategically placed between Chelsea's beasts and slipping it under the fabric some, she would slowly slide her other hand down to begin to try and remove the girls panties, "Hey doll, look's like I may be able to finish you off pretty quickly it seems..."

Chelsea's eyes go wide as her legs are locked into a grapevine-pin, thigh-high clad figure squirming underneath Tanith's weight - the two very similar in size - and as such, it was fairly hard to remove her. Her carnation-pink lips part for just a moment to bare clenched teeth, representing her struggle..toes in those little almost see-through mahogany thigh highs seen pushing lightly at the ground...

And then one hand gets the opporitunity to feel underneath the edge of her bra - one plush breast slipping free of its confines - warm in her hand...breast flesh bulging between her fingers. Her teeth seize a tuft of fuschia hair between her lips, biting down onto it as Tanith's hand snakes down over the cleft of her body - slipping underneath the thin fabric and baring her pretty little pink lips underneath...no longer having a pair of panties to cover her genetalia. Her grape-scented body gives a little butck, trying to pry Tanith off of her form....

As the grapevine in locked into place, Tanith smiles as Chelsea weakly tires to buck her off, simply shifting her hips to maintain her position over the squirming woman beneath her. Realizing that with their current position set up as it was she would not be able to remove her opponents panties she made a mental note to try elsewhere if this next move failed, but for now it was time to get to work.

"Oh no no, I'm not getting off that easily doll." Tanith smiles as she leans back some to secure her position and also squeeze gently at Chelsea's soft breast, "I'm going to ty and pick up my win over you as fast as possible." With that she slowly begins to slide a sole finger back and forth against the womans mound, her other hand going to tease the girls nipple, each hand making slow, methodical circular movements.

"If you want me off, you'll have to make me..." Tanith smirks as she continues her actions, gently building up the other woman.

Chelsea's eyes widen as she begins to realize how dire her situation is - the shift of her hip keeping the fuschia-haired girl pinned underneath her body weight. Chelsea grunts again - arching her hips up in the air slightly as she tries to pry Tanith off - to little avail. Toned little legs draw tight through their thigh highs..

Until she feels a hand reach down and cup her chest - breast flesh bulging between her fingers as she paws - the squeeze enough friction to peel one half of the butterfly bra off of her top. Clenching her teeth, Chelsea whimpers as that digit traces along her slit through the thin pair of intimates..letting out a slight gasp as her hand begins to massage methodically against her naughty bits - heat quickly starting to radiate through the thin garments, and her cheeks beginning to stain pink.

Bare fists thunk lightly against the mat.. hips wriggling in defiance as she tries to pry the woman off. "B..but! D..do..on'....ah!" Another sharp squeal exits her lips as the stimulations increase - and in desperation - Chelsea tries to lift her bottom up slightly - to reach her ankles to Tanith's torso - though...if she saw it coming..she'd have the perfect opporitunity to pry off the thin little panties cupping her toned bottom flesh as a trophy....with Chelsea's legs dangling in the air, that is.

s scantily clad lower half, the nurse quite literally seized the opportunity to take a hold of the girlsâ€

panties, and slowly slide them up her thighs. But instead of removing them completely, she left them wrapped around the girls knees, effectively trapping her legs. â€œWell, well, what do we have here? Youâ€

re pretty eager to hand me this match aren't you?â€ Tanithâ€

s hand went down between Chelseaâ€

s legs. She spread her fingers apart, rubbing to either side of the girls opening, but not actually touching her. â€œAre you really going to let my first match be this easy?â€ With the girls legs practically entangled, Tanith turned her head to look down at Chelseaâ€

s bra and press a finger directly against her opening.