Search
Latest topics
» The Promo-Conference. Charlotte Ravel' And Alaina Sanders. The Point Of No Return
by skip-stop Today at 09:23 am

» Nerissa 'Echidna' Labong vs. Carmen Rodriguez - Volatile Elements
by skip-stop Today at 09:23 am

» [Standard Match] Astrid Arvidsson vs Arjuna Samanthigupta - Today At Stake Is The Audience's Love
by skip-stop Today at 09:23 am

» [Standard Match] Margarita Jorgensen vs Mia Yukari Wilson - One Bad Day
by skip-stop Today at 09:22 am

» [Standard Match] Hawk Moth vs The Black Fang - Motivation And Respect
by skip-stop Today at 09:22 am 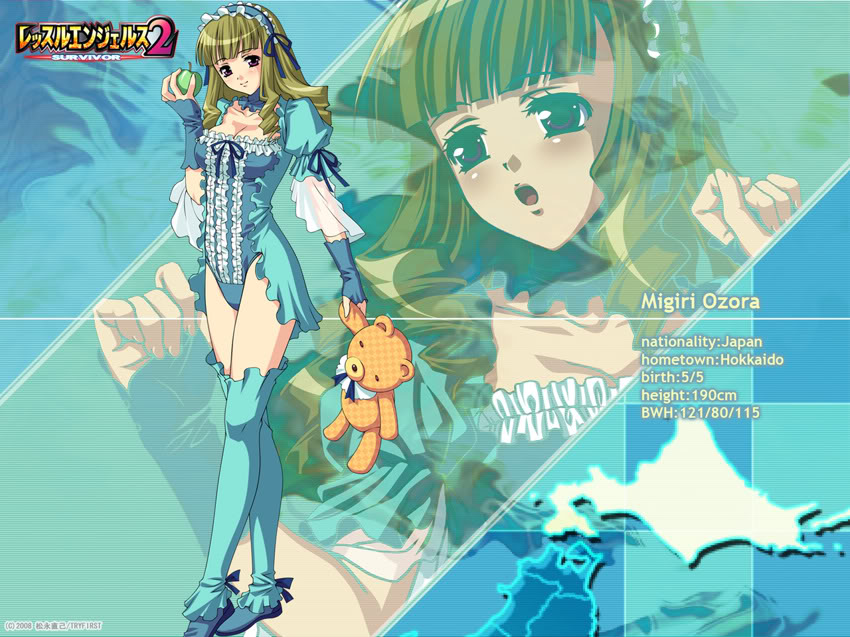 Signature Moves:
Humpty Dumpty: A gorilla Press with variations off that. Sometimes done one handed if the girl is small enough.

We all fall down: Migiri puts her opponent in a Gorilla Press and then Heaves them upward so they fall onto Migiri's knee. 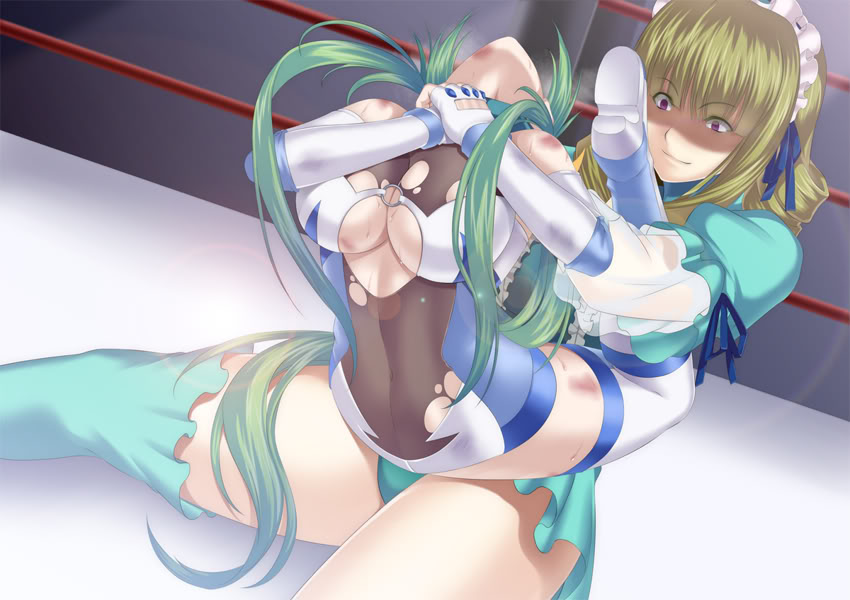 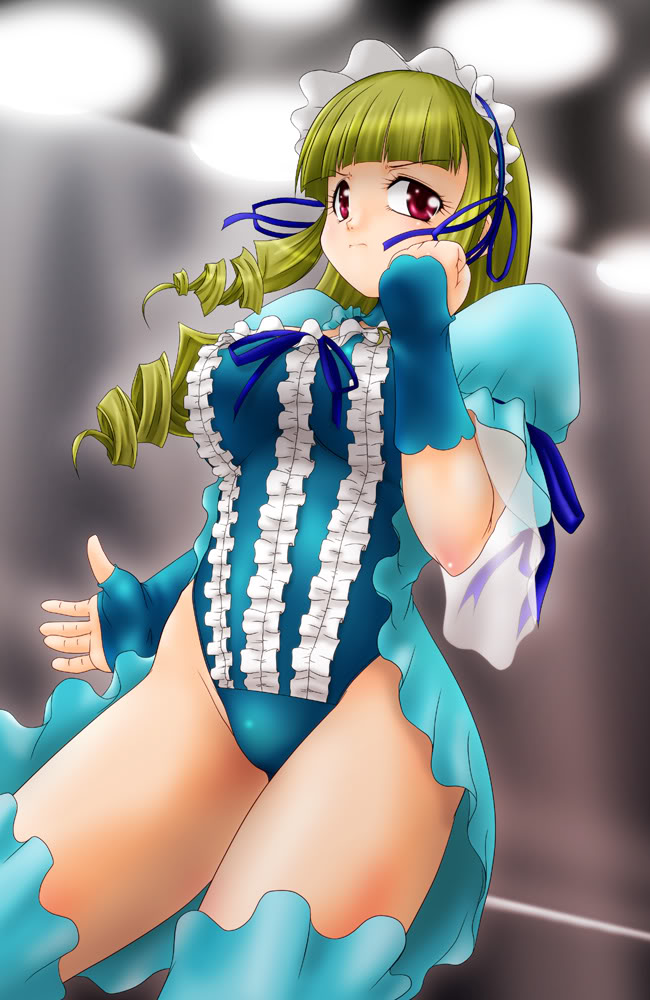 Migiri in her wrestling attire. 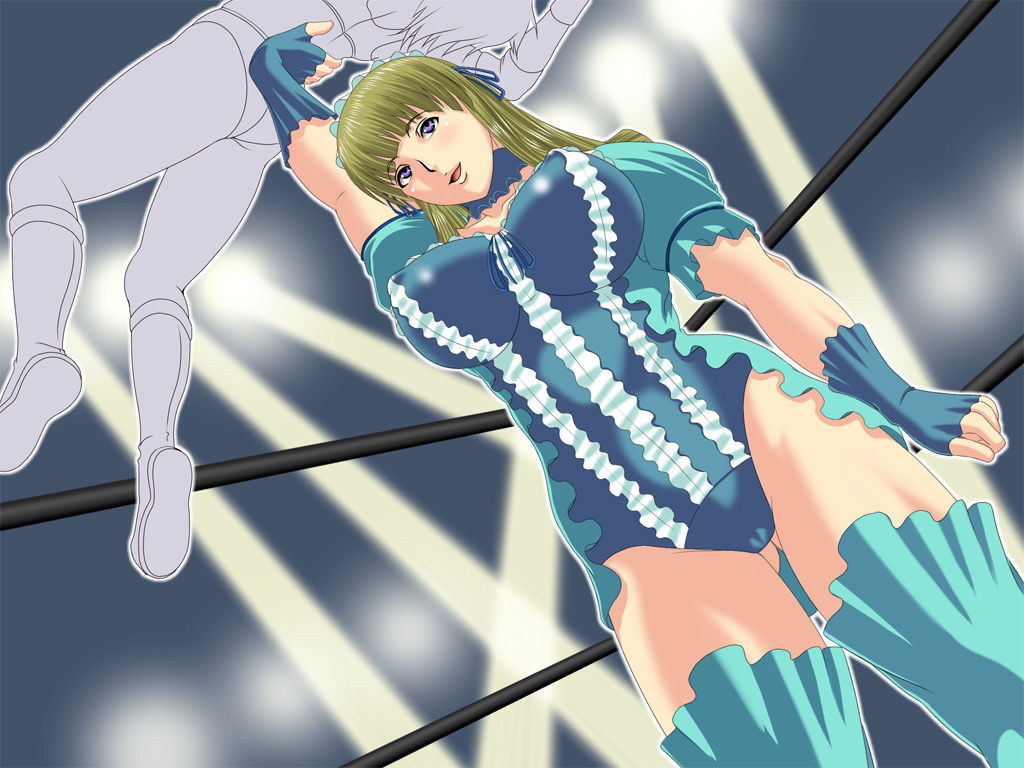 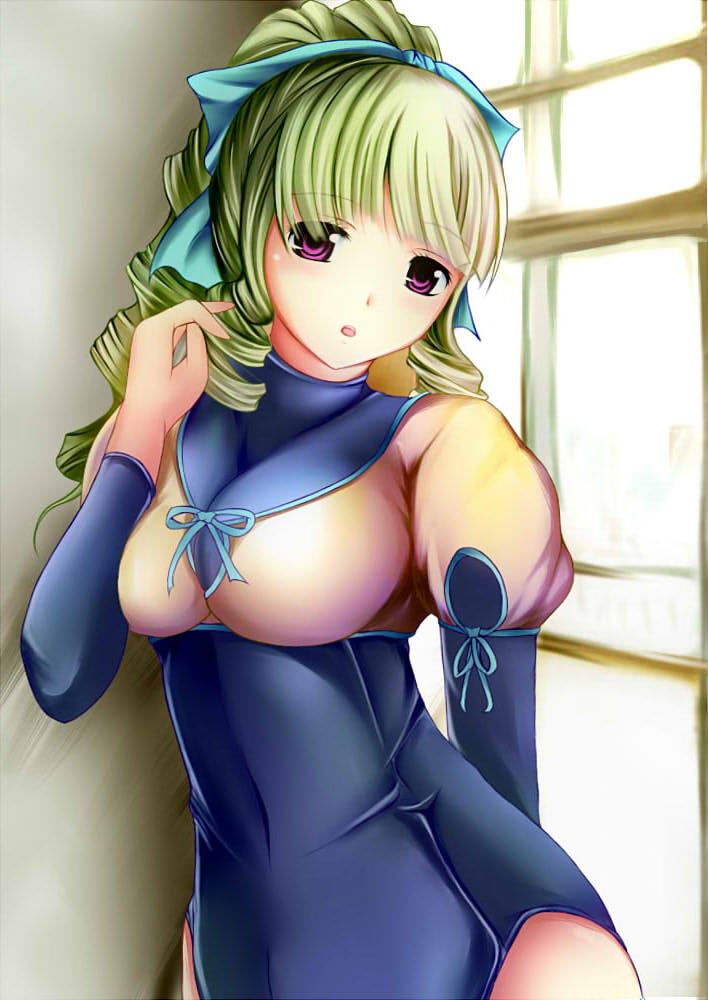 An attempt at street clothes.

Migiri has a Peter Pan syndrome. She never wants to grow up and displays it with childish immaturity, even dressing like a little kid and carrying around a stuffed teddy bear wherever she goes. She loves all things cute and loves to hug and be affectionate. She tries to be cheerful whenever she can. She tries to talk cutely and childlike as well.

Behind her facade is a woman who is intelligent but likes to push that aside for her fetish of being a child. She favors it to having to do grown up adult things as she longs for a life of leisure. But if she really really needs to be, she can make adult choices. She can also be quite sadistic, but this usually involves playful humiliation rather than outright inflicting pain.

Past/History:
Migiri was the product of an affair between a Belarusian business woman and Norwegian business man. The woman grew up in a wealthy family and was able to go to a prestigious business school int he united states. She worked her way up the corporate ladder until she became part of a contracting firm. She was doing some work over in Hokkaido. It was isolated work that required many months up in Japan's northernmost continent.

The fact that the girl didn't know anyone made it difficult to endure but she managed when she found a fellow gaijin. The two got along and it made the work easier. But one night, after drinking, the man made terrible advances on the woman. He had thought the two had a connection, but the woman had a fiancee back home in the states.

She kept quiet enough after the incident, only threatening the man to speak loudly about it to get him to leave the project, which he did. However, it was a bluff. Really she wanted to tell no one because she thought there would be a great shame upon her. She was thankful that she could hide the pregnancy until the project was finished, but she made an excuse that she had found a really good job while she was out and stayed in Hokkaido for the rest of the pregnancy.

While she was there, she managed to dump the baby off and headed back to the states, where she thought she had to do a lot of explaining but knew it could never be about the unwanted child.

The child, a girl, was found by some older farmers. They took her in but treated her harshly, demanding that she constantly do chores and go to an agricultural school and learn how to be a farmer. They loved her, but Migiri, as she came to be called, didn't feel like it. It didn't help that she was a blonde giant and everyone seemed to be afraid of her. All these factors made life difficult for the girl and yet, she learned how to grow up quite fast because of it.

Still,s he wanted to escape and when she had saved enough money she bought a ticket to Tokyo. The lights, and everything was amazing. She was so overwhelmed by it. She couldn't believe how different it was compared to rural Hokkaido. She was enamored and never wanted to leave. She ended up in a shop for young girls and managed to find an outfit that suited her. It was very childish but she loved it. She got a stuffed bear and adored all the cute things she missed out on in her austere childhood.

But she really had no idea what she might do other than escape her rough life. Until she was approached by a man who seemed to take interest in her rather unique look and offered her a job as an escort. It was no issue for her. The man said gentleman would pay her lots of money just to spend time with her and she could act as childishly as she wanted. She grew to love it. She had everything she wanted and it was handed to her on a silver platter.She felt like she WAS a child all over again.

Then one days he had to escort a wealthy man who fell in love with Migiri. He hired her personally to be an assistant. To stay by her side, even pretend that he was her daughter. The confusing scenario was something that was made more confusing when they began to have sexual relations. Sometimes even at work. Migiri wondered what this must be like and if she was doing the right thing. She didn't even know. She was lost in a debauched world. The guy even worked for some wrestling company. She wasn't too interested in that.

But almost suddenly the man was without a job. The company had folded and he could no longer afford to pay her. He had been devoted to her, but she saw his failure as her losing her meal ticket. She tossed him aside.

That was when a business woman named Michelle Taki came to her. She had been active in the wrestling league that the man had been a part of. Now that it was folding, she herself was taking over ownership. She wanted Migiri to be part of it. She knew the girl was big enough that she only needed to learn the basics. She taught her and threw her out with the new girls she had also discovered.

Migiri did quite well and usually beat quite handily any opponent she faced. Her size dwarfed most others. But soon, things began to wane. Migiri's success was now boring and the company continued to lose profits. Michelle tried one last time to get some rating back by putting Migiri in a match with Chisato Sakurai who was the other main star in the league. Michelle had told Migiri not to hold back or to play the part of the child as she often did. The match was a brutal massacre that hospitalized Chisato for months and nearly paralyzed her. Migiri hadn't held back at all and there was even a sadistic twinge in her eye as she almost literally broke the other girl. 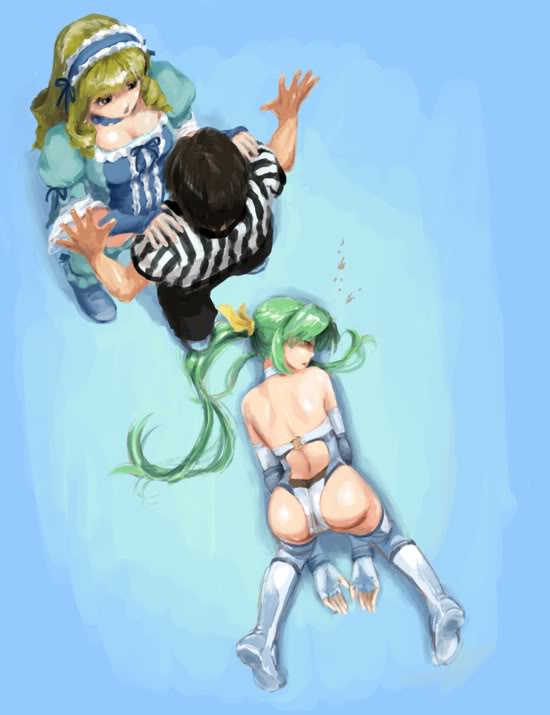 A helpless Chisato after her match with Migiri.

After that, Michelle was forced to close down the doors of the WAS League for a second, unrecoverable time. But Michelle was a smart business woman and was able to keep Migiri around as her personal attendant and body guard. Migiri didn't care as long as she was able to live the life of leisure and act as childish as she liked.

But soon Michelle would be forced to call upon Migiiri once more. Michelle had accrued some debt with her failed venture in wrestling promotions and was now forced to collect by joining the AFW herself. She signed up Migiri as well and continues to use the girl as an underling.


Attire:
What she wears in the picture.

Fun facts:
-Migiri has a fetish where she likes to strip down her opponents and trade clothes with them. If she wins a match, she will carry them backstage, forcibly strip them and trade outfits and take a picture of it. She has many different sizes of her own outfit so that they fit other girls. She doesn't mind if the other girl's outfits get stretched either.
-Migiri looooves Apples and can often be seen carrying them around along with her stuffed teddy bear who is named Ringo. 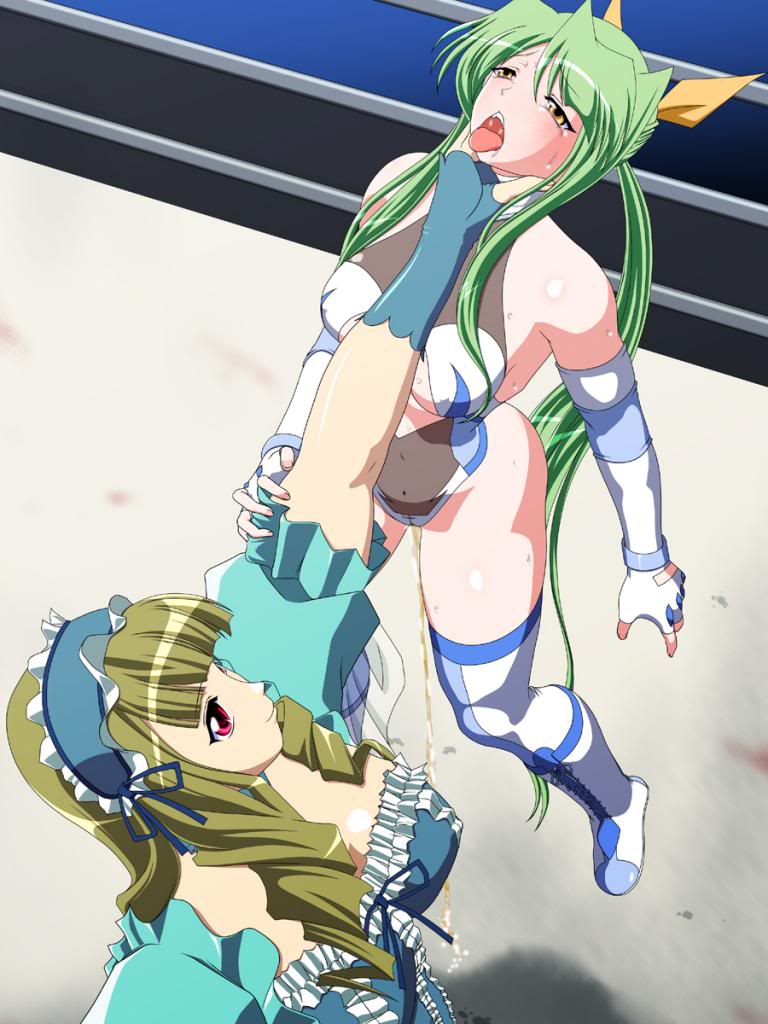