Style: Akira doesn't make use of many power moves, instead she relies on submissions moves to wear down her opponents and particularly enjoys using the most humiliating moves possible. When high impact is needed she falls back on her high leaping ability with some high flying moves, utilizing every inch of the ring to her advantage such as leaping off the ropes or tying people up in them.

Visual Appearance:
In her ring attire:

In her alternate ring attire: In her normal attire:

In her white bikini:

In her pink bikini:

In her gold bikini:

In her bra and panties: 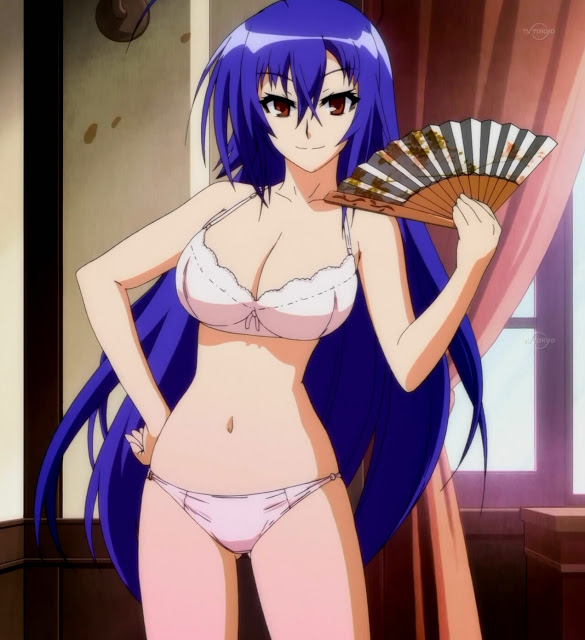 Personality: Akira is often described as having an overwhelming personality that others find hard not to get swept up in, leading to her extreme popularity since early childhood. It has also led to her being more than a bit self centered as she didn't even have to try to get anything she desired, the worship she got during school and after not helping her to be less arrogant than she is.  Akira has no use for modesty and doesn't really understand the concept, loving to grope other women and calls it comparing their charms, kissing others to cheer them up a common practice for her.


Past/History: Akira's mother died when she was born and was raised by her father, a prominent businessman who who did his best to both work hard and raise her all alone and for the most part did a good job. Showered with love from her father she grew up a happy child who got just about everything she ever asked for, though her father would make her earn these presents through chores or school work. As such she might have been spoiled but she grew up a hard worker and was always at the top of her class, the other kids were always drawn to her personality and in the first year when she could run for class president she did so, winning by a wide margin. She found a lot of joy in being worshiped by her peers, eventually becoming so popular that even other grades elected her as their president as well.

By the time Akira was in high school she had grown into a beautiful girl and she knew it, her new charms only making her more popular. Now that she was older her father spent more time at work, Akira turning to her many fans at school as a way to get the attention she was missing at home. She started modeling and participating in beauty contests of all kinds, winning nearly all of them and gaining the title of her school's number one idol. Not content she spread her fan base to other local schools and before she knew it modeling groups were contacting her with high paying jobs, making her famous on the national level. Balancing her work with her school Akira graduated at the top of her class and got into one of the top universities in Japan, doing movies and shoots for her modeling career on the weekends. Recently top magazines have conducted polls as to the most popular idol in Japan, Akira won every one of them to gain her new title.

Despite balancing both school and her life as a model Akira finished college a year early, leaving her free to do whatever she wanted to in life but wasn't sure what she wanted. She had known she wanted to graduate school and become the top model but now that she had done both she was lost, that was until a scout for the AFW offered her a job. Looking into it Akira saw a place where she could really let loose and enjoy herself, and after she saw how famous some of these wrestlers were Akira signed right on, wanting to launch her career internationally.


Fun Facts:
Akira is highly intelligent, graduating at the top of her class in both high school and college.
Akira makes more than enough money modeling to live richly, but she chooses to rent a small apartment and live a bit simpler. The exception to this is her closet as she has to have the best clothes.
Akira can eat an incredible amount of food in one sitting, most joke that it all goes right to her chest as she never gains weight.