Strategy: Anampo is very careful, and this is part of what makes her slower in a fight, as she takes her time in doing things to ensure accuracy. While she does move slowly, she can also take a good amount of pain and abuse. This gives her time to come up with counters to her opponent. If pushed enough by someone mean, she has no problem being more aggressive.

Personality: Anampo is very shy, being from such a small town and having few friends. It does show its effect on  her, since she isnt truly accustomed to city life yet. Competitively, she tries to act brave and mean like Jay, but she isnt like that at all. Instead, she will try to just get through the fight. Anampo does have a (very suppressed) mean streak in her. This causes her tobe much more pushy with what she wants.

Bunny Pummel: Though it isnt a 'true finisher', Anampo uses it as a last resort sort of attack. Which is used when she is sitting on her opponent's stomach. She will use her bunny ears to slap their face to distract them, and her fist to barrage the upper body furiously. This takes the concentration of her animatronic ears and emotion to do.
(Added 5/19/13)

Past: In every class at school, Anampo sat in the back of the room. While everyone next to her fooled around and failed, she broke 100's with ease. She was never violent, even when provoked. Her own life was quiet, as her parents were always busy and rarely home, having her raised by her grandfather. She did look up to Jay with a sort of fondness. Like he was a hero, and she's always liked heroes. Reading all kinds of comic books in her majorly empty free time at home and in between meals.

Anampo didnt have the exact same dream that the others did when she watched the AWF program on TV. No, her idea was to just become as strong as them, not being famous along with the power. Jay always put her down for being weak, even calling her 'the weakest link'. She lived the furthest away from school (Besides Jay) and complained everyday about walking. But he didnt care and told her that it was good for toughening her up. She's one of the few kids in town who didnt try to fight Jay and had no intention on doing so.

She came with Yoshiro to the group one day and just stayed. It wasnt really long after she came that that suddenly, they began to leave. Being told to don the ears of a rabbit, Anampo knew just what to make of it, being stupid for them and gluing them atop her head. (Although thats not what they meant at all, Anampo didnt care and was happy to have an impulse decision for once) Eventually, she stopped communicating when it was down to her, Conza and Jay.

Anampo thought she'd be stuck forever in that small town, but Conza came to her one day and that was that. They were on a flight to Japan like that. Sadly....The shell-shock of going to the big city made her panic and run away from Conza, and he lost her. She walked everywhere, to which the soles of her feet became harder, and her shoes worn out. After a year to recuperate, Anampo knew there was a dream she had to fulfill for herself to get stronger and maybe finally get the nerve to challenge Jay....Someday.


If you want to know about the Rabbit:
-She LOVES comic books. Ever since her grandfather gave her her first one, Anampo has always been fascinated with the stories of heroes and heroines and villains and the likes.
-When they were younger, Yoshiro tried to bond with Anampo by doing everything she possibly could. Since Nick was always tinkering away with things in his room, and Conza was still fearful of women, Jay was sort of forced to go along with the two. To art shows and galleries, the mall, and to plays in the theater.
-Has done her research. She has never met them, but has a good base knowledge of much of the AFW's entire roster and can provide tidbits of information when prompted to do so.
-Has a brother. Kogar, a detective in Moscow, Russia.

17. Anampo retuns to the ring. Match against Anastasia
18. Wher are you, Brother...?
19. Anampo and Honi in a submission match
20. Anampo's got one question for you
21. Anampo and Yoshiro make a statement
22. A Cat, Fairy, Bird, and Rabbit fight!
23. Messages are left and tensions grow in Home 3

24. Anampo does something old but new
25.Visiting Ryan for Christmas
26. What should be a nice massage session.
27. A lot of news hits Anampo in Home 4
28. Things come to a choice. A very hard choice...(Home 5) 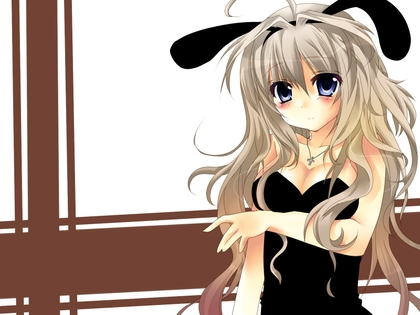 Appearance:
Above: Anampo when she wants to be a bit more... 'Fancy'. She puts a covering over the ears on her head to better match her black dress. The dress reaches all the way down to her knees. Along with that, she wears black, opened-toed heels or black flats. She has never worn this out in public before, though. She is too afraid of what others will think of about such a drastic change...

Below: Anampo's more 'normal' clothing, which also happens to be her ring attire, as well. A white blouse with a brown tie loosely tied around her neck. She wears short skirts with black stockings (usually) and moccasins on her feet.