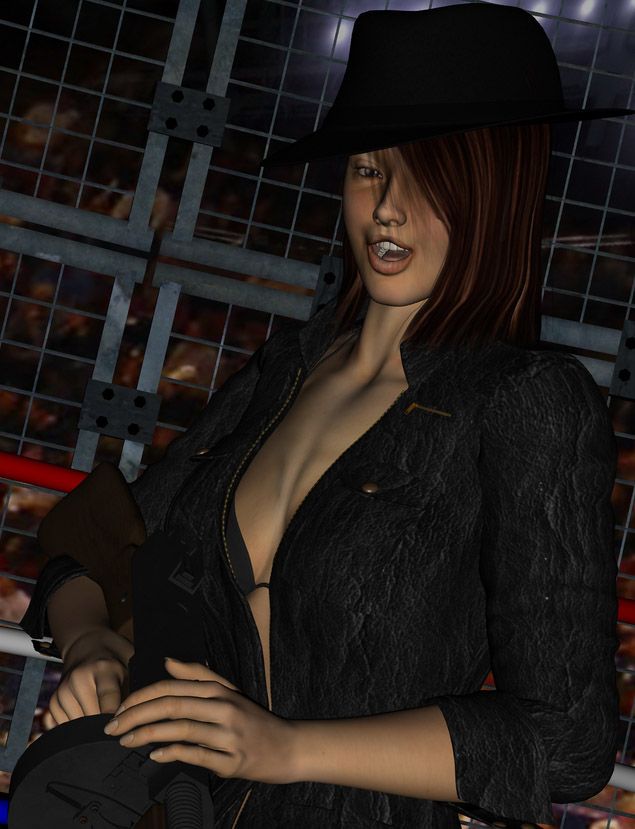 "I call myself the Mafiosi because my Papa is a Mafia Don. No, really! He is! But don't worry, I'm not a member of any mafia or yakuza. Momo-chan is the yakuza princess. Oops, did I say that aloud?"

"My hair's natural color is black. I dyed it brown so that it has the same color as my favorite flavor, mocha. And if you kept track of my body from when I started out in AFW, my breasts are much bigger since joining Friction. So if you want to buff up your bust, join me... in bed~"

"My Papa is a Mafia Don. Don't ask me what his name was; my mom Kaori and Damian never told me. He met my mom during a business trip. He was engaged back then. I happened. He later married his fiancee, an Italian woman. I have several half brothers and a half-sister, all younger than me. My Papa can't acknowledge me as his daughter. But I don't hold it against him. If it weren't for him, I wouldn't be alive today.

"My mom was a maika - an apprentice geisha - when she got pregnant with me. She's a full geisha now. She didn't take care of me, though. Damian did. My mom and I don't get along very well. She says I nearly ruined her career, even though my Papa paid for everything she needed when she was pregnant."

"I modeled as a child and a teen. I still model. That's where I get most of my money, modeling and a monthly allowance sent by my Papa. Life was cozy but boring."

"On my 14th birthday, I found an apartment wrestling match. They invited me to try it out, so I did. I managed to win my first match. I liked wrestling, so I trained myself and participated in many more matches. I'm considered the queen of apartment wrestling where I come from.

"I met Momo-chan during one of those matches. She was a tough opponent; I'm amazed I managed to beat her that first time. We became great friends afterwards. I try to get her to loosen up."

"Damian is only my manager in name. I manage myself pretty well. He's actually a bodyguard my Dad sent me. They say he's a hit man who grew tired of the business and retired. I believe them."

"Don't hit me on the head. I don't like that. I just go out like a bulb. The first time... I can't remember the first time it happened... only that it happened before I joined Friction. You know the other two times it happened to me, with Jean Grey and Masane."

"My first wrestling costume was, of course, the lingerie I wore. Today I wear either my black two-piece ring bikini, or the special lingerie set I call "Midnight Mischief".

"I used to wear a jacket and sandals to the ring, but I dropped the jacket. I wore a Mafia-style trench coat, hat and Tommygun -the bullets were blank ones, of course- during my championship shot."

"As a model, I'm always happy to try anything -or nothing- on. And as an actress, I tailor my acting to the costume I wear. So far I've got...

"1) A gift ribbon outfit. I act all rebellious while I'm still wrapped up. But when you unwrap me, I'm the perfect sub.

"I love Mizuki Nana! I have all her singles and albums! My current theme is her song Discotheque. If I'm serious, I use Take A Shot."

"I'm considering getting Kesha's Take It Off as my new opening song for all my non-Japanese fans..."

"Myr specialty area is now the futon match. After all, I introduced the idea during my second match. I also likes wet and messy (WAM) matches, especially if we mix up chocolate and vanilla to form mocha..."

"I'm good at thinking up perverted matches! Give me a few moments and an idea or three, and we're going to have a blast all night long!"

"No more standard matches for me! Unless I promised you before my coma."

Test of Strength - Yatori will offer to lock hands with her opponent and engage in a pushing match. It remains her favorite way to start a match.

Up Close - Yatori's very first and staple finisher. First, she puts a full nelson hold on her dazed opponent. Next she wraps both her legs around her opponent's waist in a hard body scissors. She then pushes down with her hands on her victim's neck and tightens the body scissors, attacking two parts of her opponent's body simultaneously.

Up Close ~Summer Variant~ - Yatori locks up her opponent in Up Close, then falls on her back and pulls on her opponent's shoulder bones instead of going for a neck crank.
Named for her opponent and friend Summer, whom she tested this variant on.

Bust To Bust - Yatori goes breast-to-breast with her opponent. She intentionally pits their nipples together. This is usually accompanied by a bear hug. If Yatori is winning the nipple joust, she will lift her opponent into the air to further impale her onto her dominant nipples. Finally she will bring her opponent crashing down with her on top for a breast-on-breast pin.
First used on Yuuki Chigusa during the First Round for the Friction Championship.

Full Frontal - Requires both Yatori and her opponent to be nude. Yatori lays her opponent on the latter's back on the mat. She then lays herself on top of her opponent in a frontal full body pin. Instead of a pin, Yatori will rub her front upon her opponent to extract a climax or a submission.
First used on Megumi Mia during an official soft futon match.

Damian Ragia - Bodyguard, manager, and childhood crush. He is her father's bodyguard and best friend. In the Mafia, he was known as Old Sicily, an assassin who killed using knives.
When he retired, he moved to Japan and took care of Yatori. He is possibly responsible for Yatori's psychological instability. He is known to date AFW wrestler Pussy Willows.

Shizuku Kaori - Yatori's estranged mother. She gave birth to Yatori during her maika (apprentice geisha) years. She works as a geisha and is famous under a pseudonym. Kaori calls Yatori by her Christian name of "Angelica".
Mother and daughter hate each other. Kaori is known to carry a tanto, a traditional Japanese knife, on her person.

Hanayama Momoko - Best friend and rival. Yakuza princess and sumo fan. She and Yatori met during a match dubbed "Mafia versus Yakuza" for the title of "Lady of the Underworld", which Yatori just barely won. Yatori teases her a lot.

Jean Grey - Friendly rival. Jean wanted to be Yatori's tag team partner, but fate decreed otherwise. They briefly became fierce forces, but their relationship mellowed out afterwards. She is the last person Yatori fought in a non-hentai match, and may be the only person the Mafiosi might still agree to battle.

Tajiri Masane - Love interest. They met in a private match outside of AFW. Yatori was the reason Masane joined AFW. The Mafiosi is torn between Mia and Masane.

Tsuzaki Shizuka - Admirer. Yes, it's that Shizuka from Sex Wars. She's Yatori's biggest fan, looking up to and lusting after her idol, whom she considers an older sister figure more than a sempai. Yatori calls her "Shicchan". 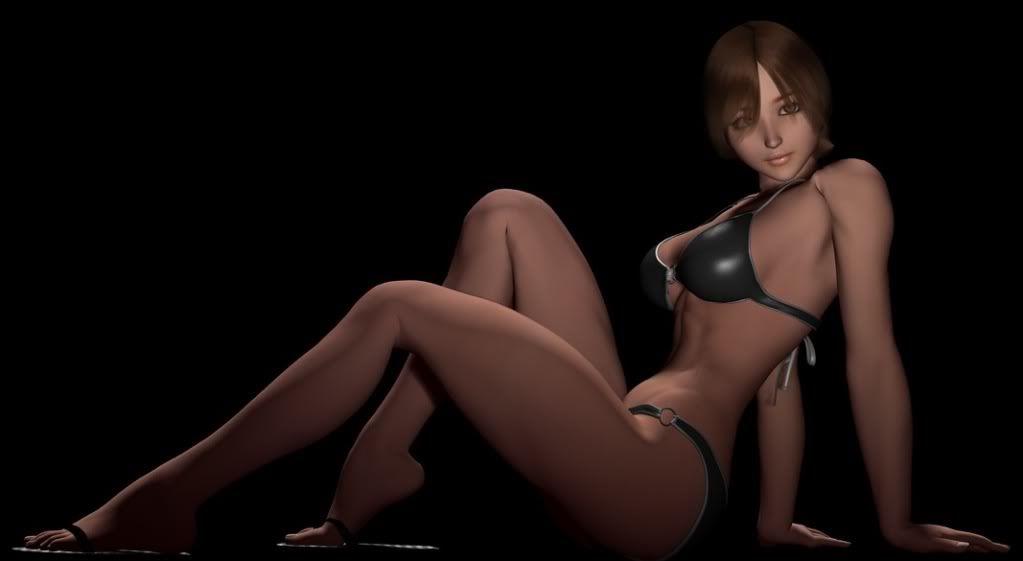 "This is me in my wrestling attire. No, not my birthday suit, silly, my swimsuit. But you have a point. Oh, this? It's a new set! Do you like it?" 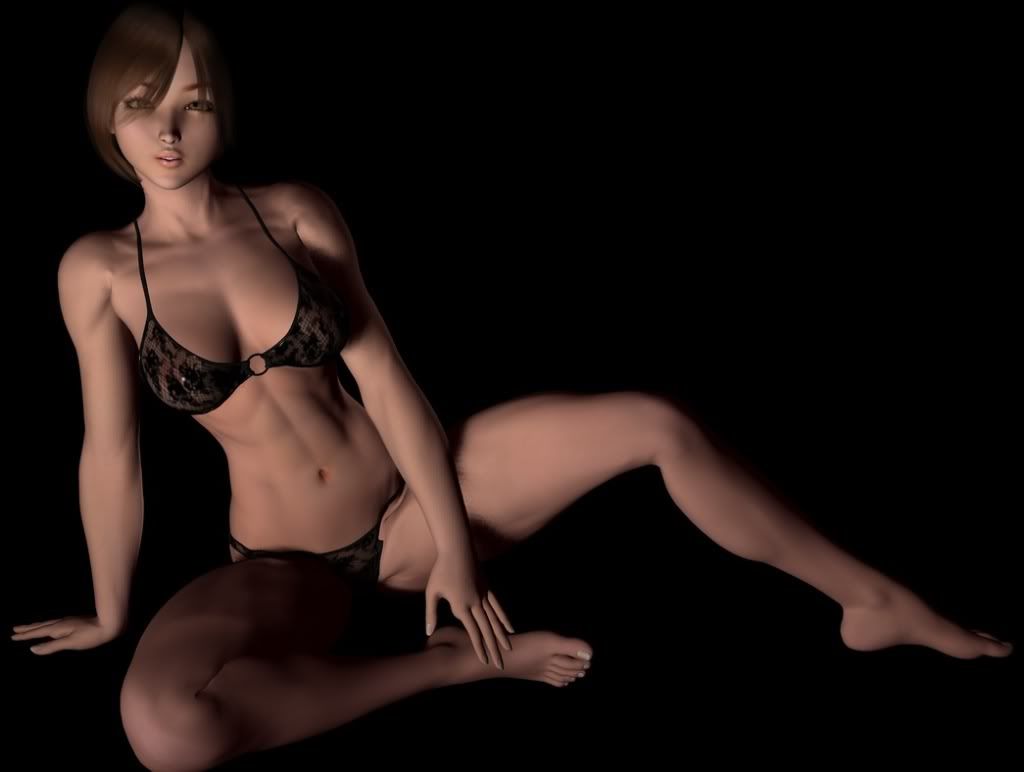 "This is me in Midnight Mischief Kai! The lingerie set and the sexual innuendo both."

"What do you think of my swimsuit? It's got the Rising Sun on it! Banzai!"

"Lingerie are great, but bikinis are also great!"