The Lullaby: Nothing fancy. It is a basic sleeper hold but she will use it early and often to try and finish the match. 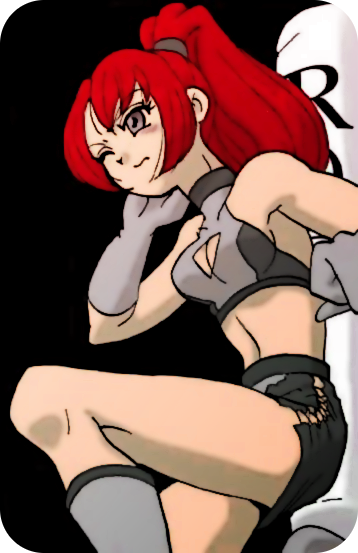 Personality: Tatyina is very shy. Though she gets embarrassed easily she pushes through her shyness to try and be friends with anyone she can. She likes to help whoever she can and even will try to make friends with those who dislike or hate her. Her timid nature belies an inner strength. Though she can be bent very easily she is very hard to break. sometimes her tenacity can really shine through in the right circumstances.

Past/History: Tatyina has been raised deep in the mountains of Hokkaido by a secret order of monks. Trained diligently in their ways from an early age she was sent to the main island of Japan to act as a sort of scion of peace, someone who would try and bring people together and promote good in the world. However, just as she arrived in Tokyo, she was attacked, mugged and raped in a dark alley. Being one who adheres to non-violence she excepted it and tried to show the assailant the error of their ways even during the incident. Undaunted and even annoyed, Tatyina was beaten within an inch of her life. Still a young girl, she was found crawling out of the alley and taken to the hospital where she was registered as a Jane Doe. She was in a coma for almost a month before she awoke with no memory whatsoever except for the name Tatyina. Taken in by a foster family she was made to live life as a normal child and even her history was made up and she has been lead to believe that she was a simple normal girl. She has lived that way, believing it to this day.

Tatyina had become a shy girl as she grew up and had always been picked on. She managed to make only a single best friend that always stood up for her. One day a gang cornered the both of them and she was unable to protect her friend who was severely beaten. Now she joins the AFW league to try and gain the skills and confidence to be able to protect the ones she cares for. For some reason that she cannot understand, she seems to have a natural fighting instinct and is also drawn to the AFW seeing the vast collection of personalities that have gathered. Now that she is able to defend herself and has gained some unknown confidence, she seems to continue to stay with the AFW, trying to right the wrongs of those who seem to be brought here in search of something.

Attire: Tatyina wears a gray backless wrestling top that has a skirt that comes down to her mid thigh attached to it. She wears traditional calf high wrestling boots that have grey soles and gray along the laces and white everywhere else.

Fun facts:
-Tatyina's throat was crushed when she was violently beaten. Because of this, she speaks in a soft whisper. Even her loudest screams and yelps sound barely louder than normal conversation.

-Tatyina is a pacifist through and through. She does not believe that her being in a wrestling league is ironic, but instead believes she must fight as hard as she can to show others the error of taking up arms and fighting. Despite this seemingly hypocritical belief, she fights as hard as she is able to and will always try and end a match as quickly and painlessly as possible.

Losses:
Vs. Dark Angel (Talia Wilson) via Knockout
Vs. Da Xia via Submission
Vs. Jenna by Pinfall
Vs. Helena MacLeod by Submission
Vs. Carol Bradbury via Pinfall