Background
Katori Kimura is wrestler from Wrestle Angels and was the best disciple and prime successor of Mighty Yukiko. She was scouted personally by Yukiko during a time when Katori was playing a game of street basket ball with her brothers and the local kids at the age of 15, Yukiko saw the potential that Katori had in her skills and invited the girl to try her hand at using those skills in wrestling. At first Katori was reluctant to do it but soon tried it out and got very into wrestling, deciding to chose that over a career in basket ball. During her time under Yukiko's wing, the former basket ball player met her soon-to-be best friends Sonia Inagaki and Hiyoko Kusanagi who were both also scouted by Yukiko as well. Katori also met her senpai's first disciple Riyu Kikuchi and developed a strong rivalry with her. Katori had more matches then Sonia and Hiyoko did in which she mostly won and lost a few, she was very special as Katori was able to have a surprise match against Mighty Yukiko while the others, including Riyu, didn't. While she did put up a good fight against her senpai, even hitting Yukiko with her Finisher, Katori ultimately lost but was praised for her skills and Yukiko gave her best student her blessings of being her true successor as her friends and rivals congratulate Katori who was very thankful for this grand honor.

Once Wrestle Angels was shut down, Katori went back to playing basket ball with her brothers and the kids. She occasionally went to gyms to practice to keep herself in shape and get stronger just in case she were to wrestle again, but wasn't too serious about it. Katori still kept in contact with Sonia and Hiyoko but she wasn't with Yukiko and Riyu, she tried to find out where her teacher and rival was but has never seen them since that match. But then, she found her. When Katori went to a diner for breakfast, she spotted a live wrestling match from the AFW on the TV with Mighty Yukiko in it! She watched in awe seeing her teacher in the ring again against Reiko Hinomoto from the Rumble Roses league which was a match made in heaven, and seeing her teacher win against her no less was breath taking. After seeing this and becoming inspired, Katori started to take her training seriously again and plans to make a comeback herself into wrestling and join the AFW league. Months of training pass by, and after learning more skills on her own, Katori heads to the AFW to register into the Friction league and hopefully try and meet up with her senpai again to surpass her and prove herself as Mighty Yukiko's true successor again to the world.

Appearance
Katori has a small body and is fairly light weight with a C-cup breast size. She has a unique hair style with cinnamon bun-like hair spirals in front of her baby blue hair with pigtails in the back. 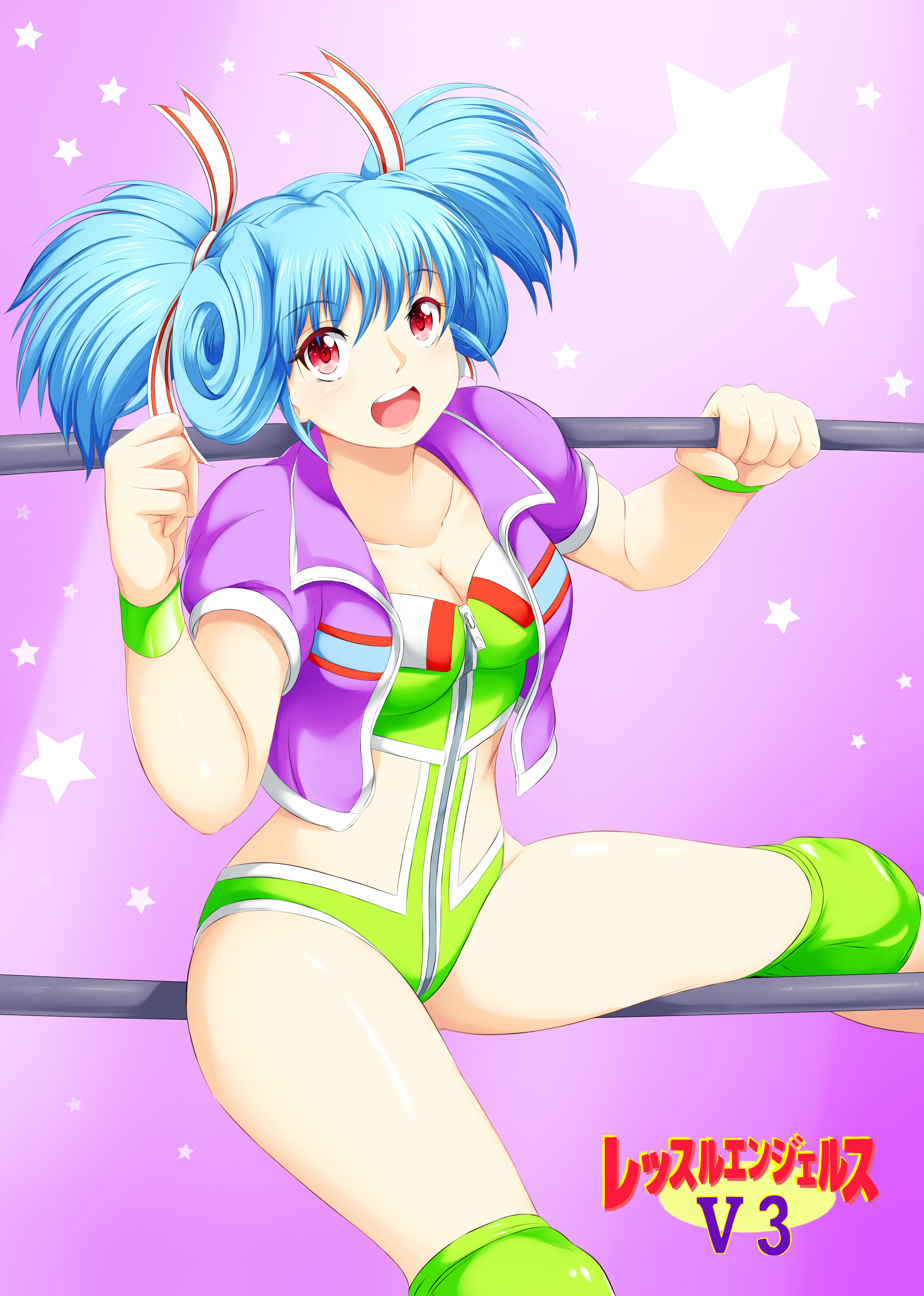 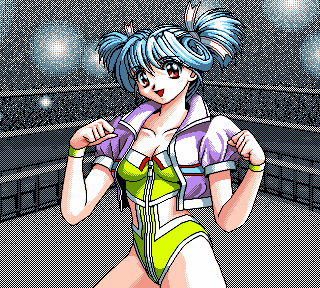 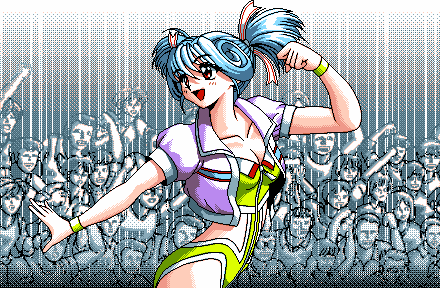 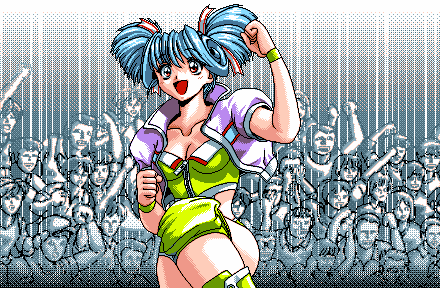 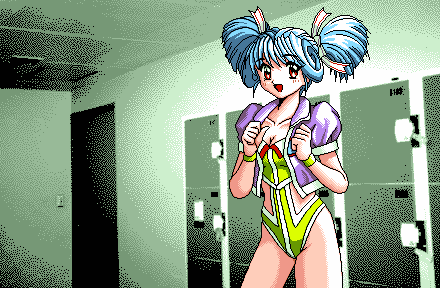 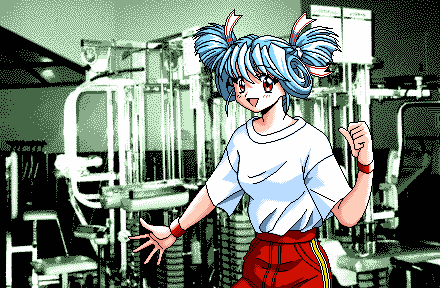 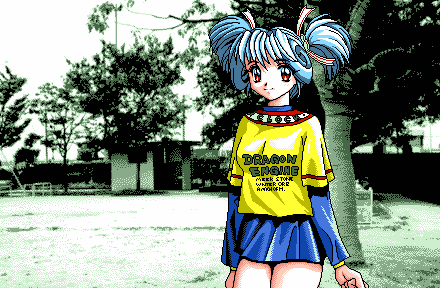 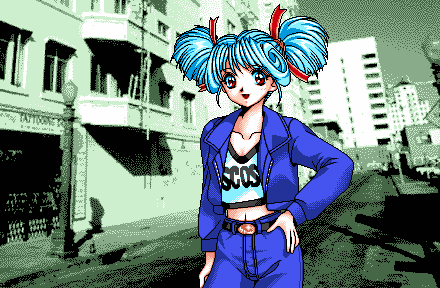 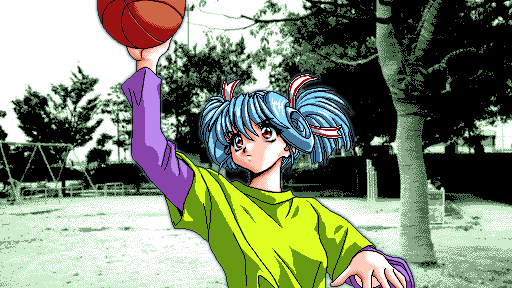 Personality
Katori is a very energetic and enthusiastic girl who is real upbeat. She really seems to be like a very genki girl, but she isn't all that hyperactive like most would be. She is very confident in her skills and abilities but isn't cocky about them and makes sure to not underestimate her opponents. Katori takes her rivalries seriously and tries to make the best out of them, treating her rivals with both respect and fair play if they are friendly. She has great coordination with her movements and tactics thanks to her time playing basket ball. Outside of the ring, Katori is a very nice girl who likes to play with children who also respects the elderly folks. Once she is inside the ring Katori is very spunky and has a fierce determination to win, but also has a sense of great sportsmanship that was taught to her at a real young age when she started to play basket ball.

Other Facts
- Katori is the only daughter in her family and is also the youngest, with having many older brothers that she loves a lot but is competitive with most of them.
- During her free time, Katori likes to play Basket ball at parks with either the local kids or her older brothers.
- Katori's best skill is being able to jump very high, which is thanks to all the times she played basket ball.
- Katori's natural sports ability is due to having played basketball with her older brothers ever since she was little.
- Whenever talking about Mighty Yukiko, Katori always refers to her as Yukiko-senpai.
- Katori's short jacket for her wrestling outfit was given to her by Yukiko before her first match and always wore it during her matches.
- Her original dream was to become a professional basket ball player, but after becoming a wrestler, this was changed to wanting to surpass Yukiko and defeat her.
- Katori is good friends with the idol Yayoi Takatsuki from 765 Production studios along with her younger siblings after meeting her at a joint program during her Wrestle Angels days, and at the same time got Yayoi more interested in wrestling while Katori got even more interested in idols.
- When Katori hangs out with Yayoi, she teaches her how to cook as well as proper methods of how to shop for groceries and what to get. She also experienced the Takatsuki Family's "Bean Sprout Party" on Thursday night and loved it, and since then she did her own Bean Sprout Parties for herself and together with her brothers on Thursdays. Once Yayoi taught Katori how to properly do it.
- Riyu and Katori once had a bet on whether or not Yukiko would be able to beat fellow wrestler Shiho Kobayakaya at a curry eating contest, Katori was in favor of Shiho while Riyu was betting on Yukiko, and Katori won the bet.
- When Katori performs the Moonsault Press, she always gets the feeling that she is flying.
- Despite being a teenager now, Katori's older brothers still treat her as a little kid which kinda bothers her.
- Katori is very brand new to the concept of hentai wrestling or sexual activities in general, so she is very shy and timid when she has to get "up close and personal" with other girls.
- Whenever Katori wants to train alone in private she likes to sneak into the shut down Wrestle Angels building to train in the gym, she tends to do this either if she is going through a tough time and is feeling down or if she has a big important match upcoming. If for the latter she plays the song "Eye of the Tiger" on her iPod while plugged into a speaker she set up in the gym as she trains to help motivate her.
- Alternatively, if Katori sneaks in the WA building while depressed she sometimes goes to the arena instead or after training and climbs into the ring to reflect on events that recently happened and/or think of the past with nostalgia. The Wrestle Angels building, both in the gym and the arena, is Katori's favorite secret spot.
- By habit and out of curiosity Katori likes to visit various wrestling gyms and clubs to check out and even take part in a few matches with their members for practice to test their skills out and her own against others, and to also scout out great raw potential in amateur wrestlers to recommend and invite to the big leagues, just like how Yukiko scouted her out.
-

Wrestling Information
Strengths: Thanks to Yukiko's training, Katori became very skilled in using Aerial attacks along with throws and strikes with above average skill.
Weaknesses: Katori always had some slight trouble with submissions, mostly when used against her and has a hard time trying to escape from them.
Style: Aerial Striker
Difficulty Level: Medium

Combat: Due to being personally trained by Yukiko, Katori's fighting style is very similar to hers with her own style to it.
Endurance:★★★★
Strength:★★★
Speed:★★★★★
Defense:★★★
Technique:★★★★★

Wrestling Attire:
Katori's outfit is a bit slightly similar to Yukiko's, she wears a custom designed lime colored one-piece that has her sides and lower back exposed with a zipper that goes all the way down the middle and passes her crotch along with a collar that is at her breast area. She also wears a short jacket like Yukiko's that is lavender colored, and to finish it up, Katori also wears lime colored wristbands, knee pads, and boots.

Record: 6/2/0
Wins:
Vs Hinata Huerta
Vs Unknown wrestler
Vs Ayaka Kurata
Vs The Adorable Cuties
Vs Moe Fukuoka
Vs Yuki-Onna via pinfall
Losses:
Vs Misaki Toyoda via pinfall
Vs Chizuru Nagahara

1: Katori starts the beginning of her wrestling career at AFW with her debut match against Misaki Toyoda.
2. Following after her match against Misaki, Katori goes to take a shower in the locker room and runs into an old rival of hers.
3. During the insane Spotlight conference featuring Taylor Parker the face of Friction AFW and Kelly Conway the false and would-be "Champion", Katori gets in on the craziness to ask a few questions.
4. Katori gets her second match up, and it's against a fiery rookie in her debut match whom the angel can see as a great rival in the future. (Possibly Cancelled...)
5.
6. In a great twist of fate, Katori reunites with fellow Wrestle Angel Chizuru Nagahara in her fourth match and reminisce about old times, while reliving old times in the ring! (In Progress)
7. Despite being a rookie, Katori was selected to take part in Summer Splash 2016! Only to learn it was a Dark Match which wasn't part of the official show, while a disappointment the young angel tried to make the best of it. (Possibly Cancelled...)
8. After getting back from SS16, determined to be taken more seriously, Katori attempts to train more seriously at her hangout at the old Wrestle Angels' building gym, while not noticing that she was followed.
9. Following after her break from SS16 and training, Katori Kimura takes on the Submission New Yorker, Kimmy Colton. Going in her first match against a submission specialist. (In Progress)
10. Young Katori meets up with Entropy Champion Alaina Sanders at the gym and trains together with her while also having a nice conversation about each other and Wrestle Angels. (In Progress)
11.
12.