Search
Latest topics
» Daisuke Takeuchi vs. Eriko Sakai
by Yori Today at 7:22 am

» A Tension Welcome
by BritBrat Today at 6:20 am

Not feeling any last moment restriction by Arasinya nor problems with herself on the ladder, Daisuke managed to grab hold of the belt and and remove it from the cable hook. She held the belt up high as the bell sounded and her being announced as the winner and the new champion. She remained at the top of the ladder for a moment after lowering her arm and holding the belt close to her and thought back. Back at how the tournament started and the two matches she had before this one being being made for the final match. She was proud of what she accomplished.

As she came back down and touched her feet on the canvas she had her arm raised by the referee, it was a good feeling. She then turned to leave but then noticed Arasinya and how she was still handing over the ropes. Both times the two of them fought on Dai's journey to the title Arasinya made Dai work her butt off and kept things very close. With that thought in mind Daisuke stepped between the ropes and helped Arasinya to the outside and leaned her against the side of the ring. She looks at Arasinya's face and wipes a tear from her face and softly tells her. She wanted to thank her for being a tough competitor both times they fought. Arasinya had just as much of a chance as she did and while Daisuke came out on top she owed it to Arasinya for putting her up to the test. However, for now she kept it short and told her while putting an around around her "Thank you...for everything."

She would remain that for a moment if Arasinya had anything to say to her at the moment in response before resuming her celebration and taking it to the locker room area. It would only be a matter of time before her friends that were watching joined her and she had a feeling they would want to celebrate along side her. The first one she saw was her husband Sion. They hugged each other as he congratulated her on her title win. She felt like now she could let her excitement truly come out. She had a lot of respect for Arasinya and while she was excited of winning the belt she didn't want to come across as gloating in front of her fallen and hanging opponent. She still showed signs of being glad and excited for her victory out there, but now she felt she could really let all of her emotions out. She had a feeling that while the match may have ended, the night was just getting started.
_________________

And that was it. The bell has sounded, the crowds are cheering, and the match was over. Arasinya was still over the ropes as Daisuke held up her belt in victory. After a while, the elf felt the skunk help her out of the ropes and go outside the ring in order for her to lean against the side. She would smile as her tears were wiped away and was thanked for this fight.

In reply, Arasinya smiled and said, "You're welcome, Daisuke. Congratulations." Soon, their friends would join in and celebrate with Daisuke on her victory. Jill would help Arasinya out and help her walk back with the rest of the group. After all, the elf and the skunk would remain friends no matter what and the celebration was about to commence.
_________________
Focusing on good old fashioned basics and just having fun. Nothing else and nothing more. 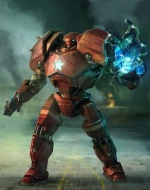