» Babe of the Month for January, Alaina Sanders!
by HighFly Today at 10:17 am

Dave's eyes widened a bit when the stranger grabbed his hand, redirecting the punch at his own face. What was with this guy anyway? Pulling his hand away, he decided to keep the story short and sweet.

"I thought I found someone who cared. Someone I opened up to. I was wrong again. o one is capable of feeling that for someone like me." he said bitterly, fighting the urge to hit something. It just seemed so unfair!
_________________
*sigh* Ok let me get the passcode.....all set, go on in! 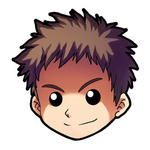 Raiden listened as Dave explained why he was feeling the way he did -- and shook his head. "You're wrong. I'm sure someone can feel that way for you." He crossed his arms over his chest, making a face at him. "I am sure of it. Do not ever feel that way. It may feel useless, but…you're very attractive."

He paused for a moment, before stretching out for a moment on the mats, his legs opening up and leaning back onto his hands. "Well, I mean. I…would like to take you out on a date. Or you could wrestle me. I will not put up a fight, it seems like you need something to…anger on. Ah…no, not that. Be angry at?"
_________________ 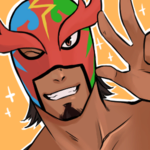 Dave rolled his eyes, "Please don't try to patronize me. I had my heart broken twice now. I'm not keen to get close to anyone again. That only ends in pain. You get used, then they throw you away!"

Most of the guys in his life were like that, Ronin being the exception, but when Raiden just so casually asked to take him out on a date, Dave was angry, "Look I'll cut you some slack since you are new here, but I know people don't date wrestling jobber geeks like me. People pretending like they do care is like some sick joke."
_________________
*sigh* Ok let me get the passcode.....all set, go on in!

Raiden couldn't help but give a sigh as Dave said that he was patronizing him. "I've…had my heart broken several times," he replied quietly, shaking his head. He bit his lip for a moment, trying to keep himself from spitting out his own life story. He stood up slowly, before giving a small snort at Dave's comment.

When Raiden revealed his own heartbreak, Dave stopped, finally realizing he had spoke out of place and had insulted this man.

The offer came up, and despite the uncomfortable air between the two, Dave nodded his head in agreement. If only to atone for his rudeness, he would hear him out. This did not however, mean that he was going to accept Raiden's offer for a date.
_________________
*sigh* Ok let me get the passcode.....all set, go on in!

It was going to be a humiliating move on his part, but Raiden felt it had to be done. "The first thing you can watch on the internet, probably." He fished his phone out of his pocket, typing a few things into youtube -- and, after settling on a video, clicked it and just handed it over to Dave.

It was a ten minute video, entitled "Jobber Gets F**kin Wrecked!!!" In it, from a ringside seat, Dave would be able to see Raiden in his wrestling outfit, posing a bit -- and in walked another person, and, much like the video described, he was quickly caught off guard and submitted to various humiliating holds. He reached out after a few minutes, letting Dave get the idea -- taking the phone back, he cleared his throat. "That was my partner number three."
_________________

"Three?" Dave asked, watching the video and flinching every time Raiden get's destroyed in the ring, "What do you mean by 'partner'?"

Now Dave was beginning to feel like quite the idiot. He assumed his problems were not similar to others in AFW, and this newcomer had so swiftly proven him wrong. How must he look to this young man? Probably like the worlds biggest asshole.
_________________
*sigh* Ok let me get the passcode.....all set, go on in!

Raiden just took the video away after the five minute mark -- the rest of the video was just bad in comparison. "A-ah…sumimasen. My English is not great. I mean…boyfriend? Yes. I think so. Boyfriend three."

But Raiden didn't hold it against him. He knew the feeling a little too well -- but he just couldn't help himself. He wanted to make Dave happy -- but why? He wasn't sure of that yet. But he reached forward and smiled lightly at him. "I was a jobber as well. Still am, probably." He scratched his head.
_________________

Dave looked him hard in the eye, "Boyfriend? So.....you were telling the truth....why are you going out of your way to help someone like me? No one else cares about jobbers."

With that, Raiden began to shift away from him, stuff his phone and hands back into his pockets. "Well…Jobbers gotta stick together. That's what two on ones are for, aren't they?" He gave a small chuckle, lowering his head and scratching his head.