Personality: Confident to the point of arrogance. Utterly proud and sure of herself. Can sometimes be friendly, but has a strong hatred for anyone from the Wrestle Angels federation.

Past: For most of her life, Hibiki Iazyoi had been a wrestling fan, ever since she was a little girl. She was always taller and stronger than the other girls in her schools as she was growing up, and had a bit of a mean streak to her, so her interest in wrestling seemed like a good fit for her. As soon as she was old enough to do so, she began training, working out, readying herself, in hopes of one day being able to grow up into a wrestler. It was all she had ever hoped and dreamed for. Eventually, her hard work managed to pay off, as she was hired on a new recruit for the Wrestle Angels company. While it seemed like a dream-come-true for her at first, the hard reality of things soon set it. Despite how hard she worked, no matter how many matches she won, she never got the big push she was hoping for. While so many of the other girls in the company got pushed, got big matches, got to headline big events and shows, Hibiki was always pushed to the side, thrown into dark matches at best, and at worst didn't even get to appear on many of the company's shows. Eventually, she left the Wrestle Angels federation, full of anger towards the company and all of the other girls that worked for them.

Hibiki spent several years working in smaller companies, becoming a somewhat well-known name in the underground and indie circuits. However, when she discovered that a great deal of her fellow Wrestle Angels were jumping ship to the AFW, she decided to follow suit, planning her revenge on all these girls who had stolen the spotlight she believed she deserved. She managed to get signed on to the AFW, her thoughts filled with nothing but vengeance towards her one-time co-workers.

And nothing was going to stop her dreams of vengeance from coming true...

Trivia:
~Outside of wrestling, Hibiki has a fondness for volleyball, and is usually quite eager to step into a game when she has the free time.
~It's a secret to everyone, but she has a rather large collection of music boxes
~While she's dominant, confident, and overpowering in the ring, she tends to take things easy in her free time. She has a small nook in the window her apartment, and on nice days enjoying curling up with a book and a cup of tea there.
~Hibiki wears glasses when she's not on the clock. When she's doing her wrestling related things, she wears contacts instead. 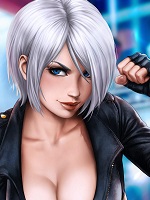 Hey nice time r u going to use her? I was wondering if you can set up a math with her vs Red Sonja