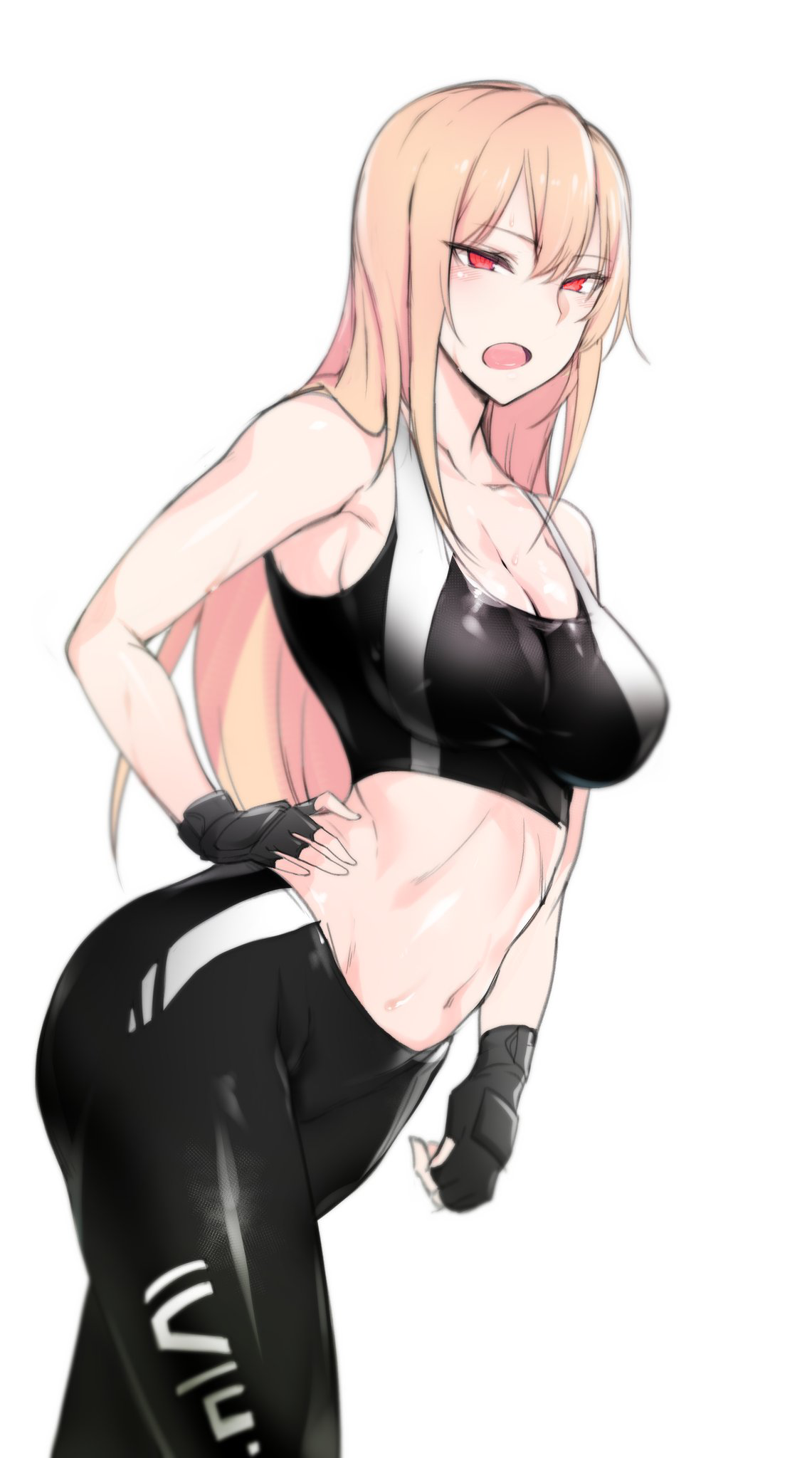 Cecilia had found herself rather bored today. With not much else to do on such a boring Tuesday afternoon such as this, the Swede simply wandered her way down to the AFW complex with her workout dufflebag and made her way into the Gym area of Friction here in Tokyo. The buxom blond champion got a lot of eyes gazing her way, it wasn't often that she came down here to Friction Gym area instead of her own gym. Yet, now she was here and after having slipped on her workout attire, a tight set of yoga pants and a sportsbra of the same color combination of black and white. Her long blond hair she decided to tie up into a pony tail as she would walk out into the actual gym.

Standing there with her hands on her hips as she would look around. Cecilia soon enough went over towards the weights and grabbed a big long steel handle bar, she would set it up on a stand and proceed to gather weights. Placing two sets of 25kg weights on each side, before looking on for a moment. She would proceed to then gather another 20kg on each. The Swede would take a deep breath as she would slip in under the handle bar, and place her shoulders up against it. Grabbing firmly onto the rod, she would push up and pull it off of the stand. Standing up with the heavy weight on her shoulders.

Cecilia would then squat down, before rising up, then repeating this. She'd do this a few times, releasing strained grunts as she did it. Continuing to work herself. She needed to be able to do this easily, after all. She sometimes used to do this exact thing with Rebecca Tomoko, her friend and rival.
_________________

Across the other side of the gym, a figure whom had not found herself on the premises of AFW in quite some time had made a rare appearance. Having seemingly opted for a break in the world of tension wrestling, but by no means opting to call it quits on keeping her figure in fine working order, a hard-bodied, long haired shorts-and-tanktop clad Italian had made her presence among the gym-goers. Holding a bottle of water in one hand, and her gym bag over the other, said raven haired powerhouse found herself quite literally scrolling through the gym; eyes wandering to near enough every piece of equipment she would usually engross herself on.

And to her outright frustration, near enough every piece was filled with a would-be fitness fanatic!

Reference Only, Not Actual Attire: 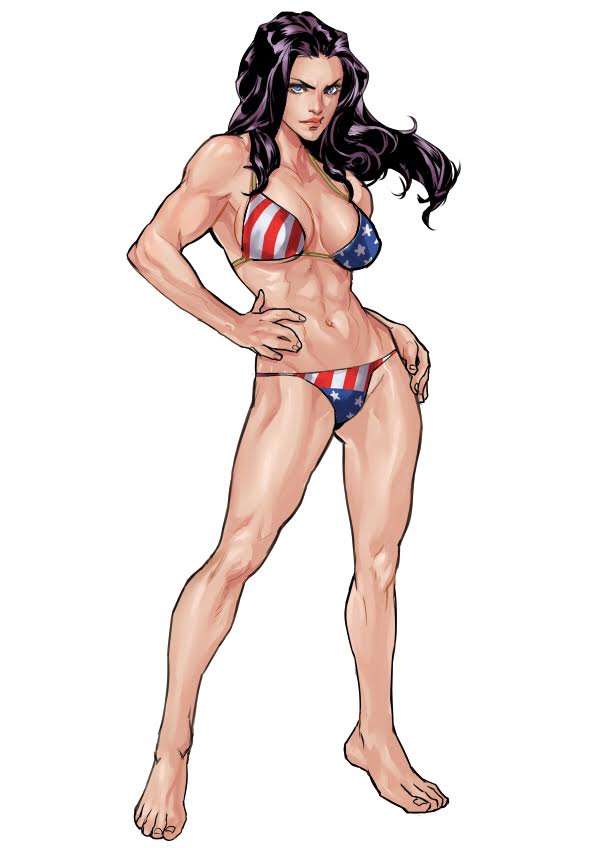 "Fuck..my..life..." She'd groan, shoulders and head literally dropping, as said figure was left somewhat on the sides when it came to simply being allowed the space to even begin her warm up. Seemingly resigning herself to awaiting the freeing-up of the nearest treadmill, it would be as those curious eyes wandered across the gym hall that said figure found a hard bodied blonde whom she had frequented upon before. Just simply not upon AFW premises.

And given she had time to kill before her awaited treadmill became free, she felt it only natural to close the distance.

"You gotta be kidding me...what, the lunchroom closed today chubs?" Dropping her bag, said words would be spoken with a thick Italian accent towards her favourite frenemy Cecilia Northman, as Diana Accera crossed her eyes, evidently enjoying goading the Swede as ever.

Cecilia attention turned towards the raven haired woman who walked towards her. The blond would tilt her head a bit before a smirk was put upon her face. Seeing Diana come up towards her and stopping just a few steps away from her. Cecilia would place her hands on her hips, pushing out her chest a bit.

" If it isn't my favorite punching bag. What brings you here? Looking for another beating?" Cecilia said as she would simply smirk at Diana. After a moment she would take a step forward and push her generous rack up against Diana's. " You do look like you're in the need for a workout. Been eating too many pizzas as of late? " Cecilia mocked Diana as she would then try and challengingly shove her chest into Diana's to make the raven haired woman stagger back.
_________________

Had one of the two changed hair colours to match the other, they were near enough twins. Muscular. Tall. Extremely stacked.

All the similarities between the two would have made Diana somewhat furious, had Cecilia and her matches outside of AFW not always resulted in a rather enjoyable scuffle. Had the rivalry between the two been genuinely hostile instead of simply competitive, Diana would have likely opened things with a strike.

As ever glancing over those comments the blonde fired back, Diana literally raised a hand to waft away those words, as she kept to a stop less than a metre away from her rival. Eyes glancing low a moment, with a smile forming to her face given Cecilia was in typical power pose.

"Isn't it sorta a-bit late for you to actually learn some wrestling? You've gotten this far on just dropping your ass and tits on people...how come your here?"

Cecilia would chuckle out at Diana's words and then bring her hand up to ruffle that hair of the beautiful raven haired woman. " Hahah!" She laughed out as she would then shake her head. " Good one kiddo, talk to me when you win a title belt~" Cecilia teased Diana before she would give her a light nudge to her shoulder.

" Though, maybe you're to scared to spar with someone better than you." Cecilia responded with a wide grin as she would then turn around and walk towards the ring, towel slung over her shoulder as she did. " Well, maybe you can find someone more you level ~" Cecilia continued to tease her sparring rival as she would throw a wink of her eye her way before she'd slip into the ring and start to bounce a little on her feet.
_________________

"High and mighty for someone not in my division!" Quick to fire back, that confident mug to her face as the Tension star opted to poke Cecilia right in her massive bust, Diana was left with hands soon to her hips as she watched Cecilia pace away. Unsure if she was acquiring a drink, towel or otherwise, the Italian stood where she was until it became apparent just what the muscular blonde was doing.

The most obvious thing of all.

Dropping her head and shaking it, that smile soon attached, a workout with the blonde regardless of end result was still a workout, she figured. Joining her at a leisurely pace, eyes not even to the bouncing blonde but to the floor, it was only as Diana slipped her figure between the ropes that she opted to raise those hands of hers. Fists forming, she shot the blonde a glare, as apparently now, it was game on.

The blond did the same shortly enough, raising her arms up and smirking towards the raven haired wrestler. " Like I care about division. I just want to kick your fat ass." Cecilia said with a smirk on her face as she would step forward when Diana spoke out the imaginary bell sound.

Cecilia would step forward and try and throw a hard right hook aimed right at Diana's impressive rack, trying to flatten one of her funbags and then try and twist around and grab a hold of Diana's head, trying to pull it in under her right armpit as she'd try and lock in a side headlock and push DIana's face up against the blond powerhouses generous side boob.
_________________

Diana was smug, but she was no fool. Past encounters outside the world of AFW had told her how hard this woman hit, and what style she used when she could. So when that arm struck in, it wouldn't find the target it sought, as instead Cecilia's arm buried itself in the crook of Diana's arm.

"Cecilia the fatso and hitting tits, name a more iconic du-GH!" Her cocky comment somewhat now dripping like egg on her face as that opposing arm threw itself up and around the head of the raven beauty, Diana's hands quickly enough went to the hips of her stacked foe. Cecilia didn't lock in a smother, but Diana knew her intent regardless. To grind her chin on her bust in the most patronising of fashions!

Evidently seeking otherwise, the Italian soon exerted strength to match; biceps flexed, as she slowly tried to pull her head from Cecilia's body, by pushing her lower half quite far indeed.

Cecilia came in and took a hold of Diana, grabbing and pulling the Italian beauty's head into a side headlock and pushed that pretty face up against her tit, though she shortly enough started to feel how the buxom raven haired woman try and fight her way out of the hold.

She felt how the hands of the raven haired woman started to push against her hips. Though the blond wasn't about to release her rival's head. She would try and push her hip into Diana's and then try and twist and pull Diana off of her feet, trying to swing the raven haired beauty up and over and down onto the mat with a quick hiptoss, trying to land on top of Diana and keep herself up against the woman and with that headlock locked in tight, pushing her side boob into Diana's face even more, this time with leverage.
_________________