Strategy: A brawler with power and a lack of ethics

Style: Brawling, Heavy grapples, hard strikes, heel tactics, Himori will take any advantage she can over an opponent, in any way she can, and will actively go out of her way to enrage the audience and mock them.

Preferred Matches: Any, with a personal taste towards matches lacking count outs and dq’s, though she has no issue taking a DQ or count out loss.

A Thousand Hells - Hiromi grabs her opponents arm, grinds her boot against their head, then holds them in place while stomping down on their head repeatedly.

V-Break Himori grabs her opponents finger and, after taunting her, roughly "snaps" her finger, jerking it at an unnatural angle to cause a brief intense pain to stun her opponent and briefly stop whatever offense they were trying, may do multiple times per match.

Finishers:
Idol Buster - Himori sets the opponent up for a suplex, hooking the leg, before twisting her body turning the opponent up and over and snapping them onto the mat with a twisting fisherman buster

Excessively Harsh Treatment - After stomping repeatedly on and snapping her opponents fingers, Hiromi will trap her opponents wrist, grabbing and bending the other girls fingers until she submits.

The End of Dreams - With her opponent face first onto the mat, or on all fours, Himori will bounce off the rope, run towards the opponent, and jump, raising one leg up and bringing her foot down onto the back of her opponents head, stomping them face first into the mat!

Due to her extremely negative experiences as an Idol, and the unceremonious way she was fired from her contract, banished from that world, Himori is extremely bitter towards the crowd, and anybody they cheer, feeling they only cheer people willing to flaunt their body and lack any self respect.

In the ring, she’s arrogant and disrespectful, both towards her opponent and especially the crowd, going out of her way to mock her opponent and bully audience members. Like any bully, however, being stood up to and outfought sends her scrambling for a retreat.

Outside the ring, Himori is a loner, with a snarky and sarcastic attitude towards most, especially when dealing with anyone with a degree of popularity or fame. However, those who don’t cater to the whims of an audience and follow their own path, she holds in regard and will treat with respect.

*Grew up in Sapporo, Japan, the daughter of a low level salary man and an office lady. Despite their best efforts, neither parent made much money, and the family managed to skimp by month to month, with Harumi denied most of the luxuries that more middle class families could afford.

*Things changed however, when Harumi was a young teenager. One of her favorite past times was posting videos of herself,(with equipment she managed to buy after spending most of her childhood saving up any and all allowance and birthday/holiday money she was able to get) singing her favorite J-Pop and rock songs on Youtube. To the surprise of herself and her family, she was discovered, and visited by a representative of a music label, looking to form a new Idol group, wanting her to take part. Her family, excited about the possibility of the riches she could earn, were more than happy to sign her contract for her.

*For the first couple of years, being an Idol was a dream. She was given lessons to sing, dance, given cute and flashy outfits, and was great friends with the other girls from her group, named "Tru-V Shift". However, what started as a dream, soon turned into a nightmare.

*Around her mid teens, things started changing for Harumi. The group, after starting small for the first couple years, gained mainstream success, their albums reaching high spots on the Japanese charts, and due to their success, their agency pushed them harder and harder. Longer routines, skimpier outfits, more and more tour dates, constant attention from press and fans, all driving Harumi and her fellow idols to the brink of exhaustion.

*Even off-stage, life was difficult. Their personal lives were completely under the control of their music label. She was forced to live up to the impossible image that Idols had to present, of being an entirely good and wholesome girl, of having top level grades and constantly having to study, of never being able to date or show interest in boys, due to her image demanding that she stay single and make fans think they might be able to date her one day, (Indeed, the one time a newspaper reported that she went on a dinner date with a boy and had a picture of them kissing, she was forced to issue a public apology.) to always having to find time to work out and stay in shape, and have the very food she ate monitored and controlled, all while the media constantly invaded her life.

*It was a controlling, depressing life, and it wore away at her and her several idol friends, causing a few rifts between members of the group. Even worse, her parents, enjoying the greater lifestyle the income she was earning provided, were happy to sign an extension to her contract, locking her in until she was 19. As she grew older, she became bitter, disliking the life style and culture surrounding Idols and their fans, who she deemed as creepy and perverted. The cherry on top, was how, as her and her friends got older and closer towards turning 18, the label brought in newer, younger girls to be the fresh young faces, getting all the spotlight in songs and concerts, while Harumi and the girls her own age still in the group were pushed to the roles of supporting vocalists.

*Finally, when she was 19, and her contract was coming up, and she finally was able to handle her own contracts, she announced she was leaving the group, and music behind. Her group tried to enforce her to stay, showing several bits of fine print that would have kept her under contract for far longer, but thanks to hiring a high priced lawyer, she was able to win a lawsuit against the label and get out of her contract scot-free, leaving the music business behind.

*She drifted for several years, not wanting to deal with any fans or people in general, becoming something of a hermit in her early 20's, not needing to work due to the money she had earned through her childhood, (which she quickly took back from her parents with the help of the same high priced lawyer) and began enjoying new artistic hobbies, though through it all remained bitter towards Idols culture.

*One day, she saw an advertisement on television for an AFW ppv event, having heard of the company and seen a couple of their "allowed on TV" matches, and one of her groups songs was even used as the Friction Television shows theme at one point. What caught her eye though, was how the commercial focused on several Idol-type girls, cute younger girls in idol type outfits, even a couple groups who would sing to the crowd as they entered the ring, and discovered through research about these girls popularity, and the kind of hentai matches they would subject themselves too, all for the entertainment of their so-called fans. The cherry on top however, was seeing that one of the sponsors for the PPV in question, was her old music label.

*Enraged at the idea that idol culture was branching out to other avenues, Harumi decided it was time to end her self imposed exile, and paid to be trained as a wrestler by the best wrestling dojo's Japan had to offer, spending a couple years learning and training, and having a few trial matches on the indy scene, where she would test her style by beating up and brawling with the cute young "kawaii" league girls AFW had made so popular.

*When she felt she was ready, she had her agent contact AFW, and the offer of being able to add a famous person onto their roster, especially one who had been a hermit and would get mass media attention for re-entering mainstream society, was too good for the league to pass up. Now, confident in her ability, and willing to cheat if needed, Harumi looks forward to fighting in the ring, her goal to save these Idol wannabe girls from going down her path...by beating the hell out of all of them!

While Himori will fight anybody given to her, she prefers to go after smaller, cuter girls, even kawaii’s, wanting to specifically defeat and humiliate girls that play to the crowd.

Deep down, Hirmo actually does miss the feeling of having thousands of fans adore her and cheer for her, and, without her former Idol friends by her side, she often gets lonely.

Two of the girls of her former Idol group, “Tru-V Shift”, send her letters to try and keep in contact with her. She collects every letter, but has never written back.

Her ring gear is a version of her former “Schoolgirl Idol” outfit, only covering more of her than the extremely short skirt and shirt she used to wear did, intentionally denying fans things like panty shots.

She can still sing, and often will sing to herself when nobody can hear her.

Harumi has several hobbies, having made a point to try as many new things as she could after quitting music, learning to paint, cook, and draw, among other things. 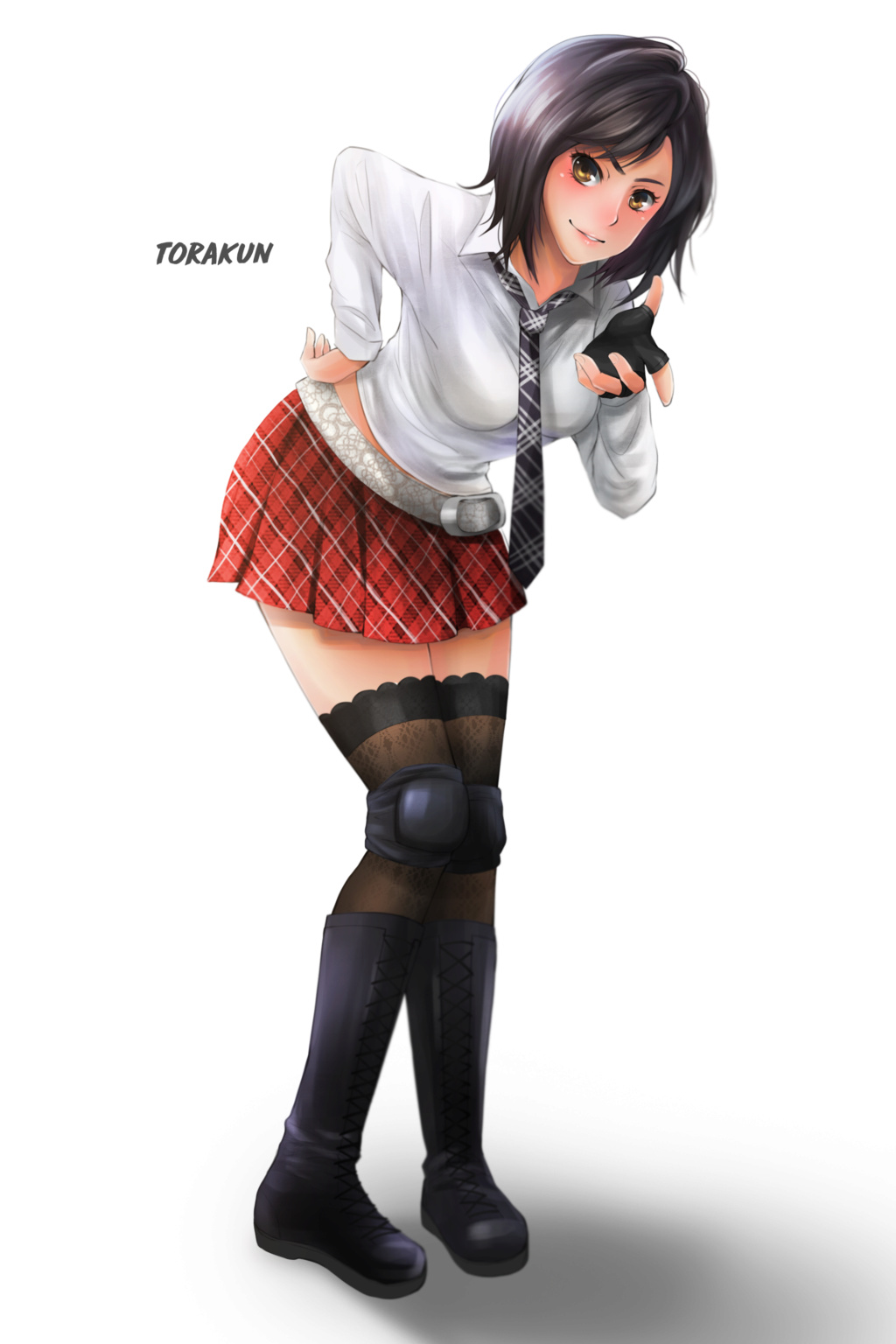