Strategy: Attack, attack, attack. Pure aggression, all the way through, throw as many bombs as possible until the opponent stops getting up.

Demonic Cross - A unique submission hold, Mao lays his opponent on their back, grabs their legs, and sets them up in the position for a figure four, only to then turn their body over and trap their legs in a tight sharpshooter style hold, fusing the two famous holds into one.

Demon Drop: Mao stands behind the opponent, hooking his arm around their head from behind, then falls back, dropping the back of their head onto the mat with a reverse DDT

Death Drop: An Elevated Demon Drop, starting from the same position as the Demon Drop, Mao grabs his opponents waistband and lifts them upwards, elevating them high before sitting down, dropping them down onto the back of their head.

Banished From Heaven: Mao lifts his opponent up onto his shoulders from behing, having them sit on his shoulders in an electric chair position, then shifts one leg off him and grabs the back of their head, before flipping the opponent off of his shoulders and sits down, slamming them backfirst onto the mat with an Electric Chair Driver.


Personality: Hard headed, stubborn, opinionated, and boistrous, Mao tends to wear his heart on his sleeve and have not much in the ways of volume control.

While not a hateful person, his bitter feelings of failure and inferiority about his career cause him to compensate by being cocky and boastful towards his opponents.

Outside the ring, he is generally approachable, enjoys conversation and debating over politics, wresting, and other topics, though often is too stubborn to change his opinions on anything.

Past/History: An aging wrestler with a long history on the indies, known for always being a "bridesmaid" of sorts, as despite gaining a name for himself, often found himself teaming in random tag matches with other indy wrestlers who went on to become stars without him, failed to gain any championships, get noticed by any mainstream leagues, and as his small star faded, was relegated to working garbage hardcore wrestling leagues before lucking out with an afw contract, viewing it as a chance to finally shine on a main stage and claim some real glory for himself.

While unable to help his surname, MAO hates his first name, and has no idea why his parents would actually name him after a nut.

Was nicknamed "The Demon King" in the indies due to his aggressive nature, hardcore matches, and his penchant for coming out to the ring dressed in a robe and oni mask, along with a massive, fake, scythe.

Despite his fierce personality in the ring, outside the ring he's generally affable, though rather boistrous and argumenative

While a heavy death metal fan, Mao has two nieces who he adores who he takes to various K-pop and J-pop concerts. 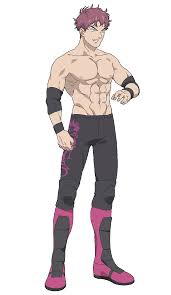 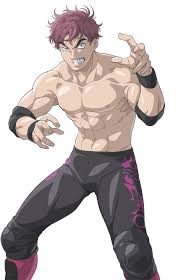