Alaina wasn't quite used to this but she was really having a good time. The amazon had done quite a few costume or themed matches for charity before and loved them. This wasn't for charity but it was for fun even though Alaina knew it would be competitive. She was finally facing off against main staple Natasha Loclear in the ring and Alaina was excited about it.

The two hit it off well and had a productive interview back in January. This match was in the works for a while, but now was finally happening as a wrestling ring was set up at a major convention center. The fans knew the wrestlers and the characters they portrayed. Alaina was dressed up as Taki, although instead of a skin-tight bodysuit Alaina wore all the same armor around her shoulders as Taki did but she wore a purple one piece swimsuit to show off her thighs, her backside... her figure a bit. She had purple boots that went up just under her knees with black kneepads on. Sure it wasn't an exact cosplay but it was damn close to the real deal while being tweaked for wrestling.

Alaina's.... or Taki's music played as she came out thin face mask and all as the crowd roared. Alaina knew Taki was a more reserved character so she toned down her usual entrance as she waved to the crowd or nodded respectfully to them as she strut her way to the ring confidently before jumping up onto the apron, climbing through the ropes to enter the ring.
_________________
"The Amazon" Alaina Sanders-Friction
Danika Gorski-Friction(Inactive)
"Gnarly" Charlie Haines-Tension(Retired)
Suzumi Ishikawa "The Tsunami"-Friction
Peggy McIntyre-Friction
Hikaru Sawazaki-Friction
Rosa "Crusher" Cabrera
"JJ" Janella Johnson

It had been a few months since they had initially talked about an idea for a themed match back at the interview but after a couple further meet ups to iron out the details they had agreed upon a Soul Calibur match at the next big convention. Admittedly Natasha only played a few games a year but soul caliber had always been a favorite of her's since the second game in the series, well technically the third game but that was semantics really. So when Alaina had shown excitement for making that their theme of the match she had been quite ecstatic, especially since she had been wanting an excuse to have her aunt tailor her a cosplay for one of those lovely fighting game ladies.

Natasha had gone to a good number of events for AFW in her time with the company, several conventions included in that number so she was well used to what would be expected of her and the best ways to manage her time. Alaina made for an excellent partner for the convention thankfully, good company always made these events go by quicker and before she knew it they had survived the autograph signing and the panel. All that was left on the second day of the con was their exhibition match and she couldn't wait to get out to the ring in her new cosplay. 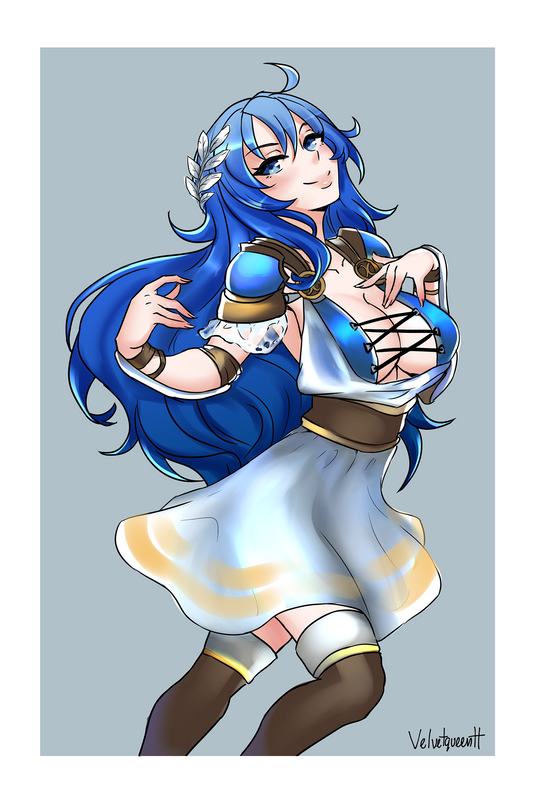 It had been a tough choice between Sophitia and Ivy but she had gone with the greek goddess in the end, deciding to go with her costume from the sixth game rather than the see through white sheet she wore in later titles. Her outfit was game accurate, which might end up being a good or a bad thing considering how much the costume broke in the game itself!

The theme music for Sophitia started to play after Alaina finished her entrance, Natasha stepping out and much like Alaina had toned down her entrance quite a lot to fit with the reserved and proud greek woman, that and there had been no way to duplicate her flashy entrance at the convention. She shyly waved to the crowd and even bowed a couple times on her way to the ring, climbing up inside while doing her best to stay in character and keep people from getting too easy of a look up her skirt. Once in the ring however her own personality took over a bit. "Ohhh love the look Taki, maybe even better than your usual bodysuit~"
_________________
The Many Characters of Daemongirl

Alaina saw Natasha appear and she stood confidently in the ring but gave a nod to her opponent. Natasha really went all out on her attire as it was an exact match from what Alaina knew of the series. The amazon turned ninja was hardly the same body type as Taki but inside the ring Alaina wasn't trying to be anyone else, simply herself in a different wrestling attire. She could fly very well for such a big lady but she was not going to alter her game plan.

"I appreciate it Sohpitia, you look great as well and truly a fine representation of Soul Caliber." Alaina said, extending her hand for a handshake before the match started. Alaina would wait a moment and take a few steps back to her corner to await the ring bell.

As soon as the bell rang however she would move right at Sophita and lunge in attempting to grapple with her! Alaina knew that most often her raw strength, durability and endurance were her best assets and she intended to use them. She wanted to power Natasha back and smash her into a corner as she grappled with her to kick things off her usual amazon way!
_________________
"The Amazon" Alaina Sanders-Friction
Danika Gorski-Friction(Inactive)
"Gnarly" Charlie Haines-Tension(Retired)
Suzumi Ishikawa "The Tsunami"-Friction
Peggy McIntyre-Friction
Hikaru Sawazaki-Friction
Rosa "Crusher" Cabrera
"JJ" Janella Johnson

"Thank you Taki, how generous of you to say so!" She raised her right hand up into the air while dropping her left down to her hip, mirroring Sophitia's famous victory pose though without the sword and shield she carried in game. Seeing the outstretched hand Natasha accepted the offer, though she pulled her in close so she could whisper to her without their fans hearing her this time. "Just be careful tugging on the straps to this costume, its game accurate but still not too practical." Natasha winked and then stepped back into her corner, doing a few more stretches while waiting for the announcer to finish saying their piece and ring the bell.

Once it sounded Natasha moved out to lock up with the amazon but she hadn't been quite expecting such a forceful start from Alaina, the frenchwoman grabbing onto her by a shoulder and an elbow though it did little to keep her from being shoved back into the corner. The ring seemed to shake more than usual as her back slammed into the turnbuckles, something Natasha chalked up to it being erected just earlier that afternoon. She just hoped it held up once things really got going!

"A wild rush Taki." Teasing the amazon likely wasn't the best use of her energy but Natasha never had been able to help herself. Meanwhile she dug her fingers into Alaina's shoulder and elbow, getting a solid grip before lifting up her knee for a few quick strikes at the inside of Alaina's thighs, not far above the knees.
_________________
The Many Characters of Daemongirl

Alaina nodded silently as Natasha gave her the warning about her attire. Alaina was focused and pleased when her opening gambit to force Natasha into the corner seemed to be paying off! However, before she could land some strikes Natasha was quickly hammering her with knee strikes, forcing Alaina to back off!

She grunted and staggered back a step, knowing she had to try to land some sort of strike while her opponent was in the corner. Alaina stepped forward after taking the knees trying to land a hard chop across the chest in retaliation as she tried to salvage her situation as best she could.
_________________
"The Amazon" Alaina Sanders-Friction
Danika Gorski-Friction(Inactive)
"Gnarly" Charlie Haines-Tension(Retired)
Suzumi Ishikawa "The Tsunami"-Friction
Peggy McIntyre-Friction
Hikaru Sawazaki-Friction
Rosa "Crusher" Cabrera
"JJ" Janella Johnson