Preferred Matches: Sally is open to most matches, although she shuns bouts which can get vicious.

Endurance: * * * *  Sally is a tough girl, and her body can take an impressive amount of punishment - what's more, she can recover from moves rather quickly inside the ring.
Strength: * * * * * Sally's a real powerhouse - her stout strength is her biggest advantage in the ring.
Speed: * * Sally is slow and a bit clumsy, but can strike surprisingly fast if she wants to catch her opponent off guard.
Defense: * * Sally has little experience with warding off attacks.
Technique: * *  Sally came into AFW with no wrestling knowledge at all, but has picked up some basic submission holds from her bouts.
Cooking Technique: * * * * Try her pancakes!
Hentai Skill: * * * Not the best.
Cuddliness: * * * * * Blows any fluffy teddybear out of the water.

A Grizzly Affair: A bearhug/breast smother combo. Basic, but the extent of what she knows what to do!

Rump Romp: If her opponent's on the ground and on their back, Sally will drop her big, sexy rump onto their belly and bounce up and down a few times, before sliding smoothly into a rump-smother, proud to let her curvaceous behind finish the match!

Bosom Muffler: If her opponent's on the ground and on their back and stunned, Sally will lower herself onto her opponent, intertwining her fingers with her foes, resting her belly on their breasts and using her own titanic bosom to smother her opponent into oblivion! If she thinks her opponent can't break the pin with only one hand, she'll only curl fingers with one hand and use the other to blow kisses to the audience. 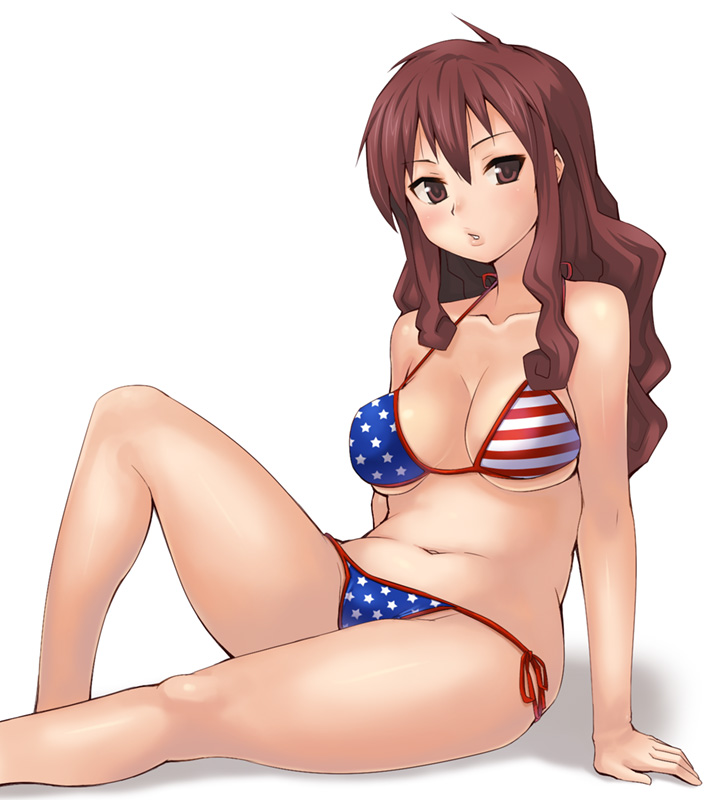 Physical Appearance: Tall, a bit on the plump side, and quite brawny. She lucked out in the chest department and has knock-out hips as well. Her hair is long and curly, her eyes a deep brown, with a cute, pointy nose. She doesn't often wear makeup, but when she does, she keeps it simple, sticking to a dark red lipstick. She tries to buy brands that'll rub off after a firm kiss, leaving an imprint of her lips on her opponent where she smooched them.

Personality: Sally is friendly, easygoing, and a bit prone to mothering. She joined the AWF looking for fun, and it's important to her that her opponent enjoys herself too - to a certain degree, at least! She never swears, and her smacktalk is limited to telling her opponent how much she's going to enjoy winning. In the ring, it's obvious she doesn't take the matches seriously at all, preferring to tease and play around with her opponent rather than focusing on winning. If it wasn't for her lack of drive, Sally Brown could be a real contender in Friction! She likes to meet her opponent's before their matches - she can be a bit picky about who's she going to wrestle, refusing to if she feels like her opponent won't be fun to wrestle against. She's really a huge softy - if she thinks she's going too far in a match, she'll back off immediately.

Sally has described her ideal wrestling match as "Cuddling with a winner". She tries to respect boundaries and avoid distressing the girl she's grappling with. If her opponent ever breaks down and cries, really cries, Sally will throw the match out the window and try to comfort her foe. Over the course of her career, she's become a bit more interested in the wrestling side of wrestling, although she maintains her happy go lucky attitude.

Sally's biggest flaw is that she's too easy going. She'd rather not argue, and is easy to push around in conversation if you're firm enough and at least sound reasonable enough. She's trusting, naive, and bad at stopping her friends from doing stupid things.

Character Development: Sally is starting to become somewhat confused and disheartened by the AFW. This place is starting to get with her, and she honestly doesn't know what to think about some of her opponents; sometimes it feels like the AFW is bringing out the worst in her. She's also just not doing very well, wrestling wise, and she has a niggling sense like maybe she should be trying harder.

Past/History: Sally was born in the southern parts of the USA, in a small town and to a loving family. At the schoolyard, she made a habit of breaking up any fights going on, earning her the nickname "Big Sis". After spending a few years working at her folks' diner, she decided she wanted a change in life and moved to Japan, opening up her own little diner on a quiet country road. Although she made a decent living (she speaks a little Japanese), she found herself bored out of her mind. By accident, one night, she found herself watching a few clips from the AWF, and decided that it looked like a lot of fun!

Sally's favorite food is a pile of pancakes smothered in maple syrup.

If Sally manages to win, she likes to carry her opponent out with her; tucked under her arm, thrown over her shoulder or in a bridal carry.

Record: 1-5-0
Wins:
Vs. Minnie Navarre, via tuck-in!
Vs. Takiyama Miyabi, via spankings!

Sally faces the Maid of Justice in a 2/3 submission match! Defeat!

Sally competes in a standard bout with a native american speedster. Defeat!

Sally Brown fights a first to 75 spanks match against a sumo wrestler in training; slightly rusty on her Japanese, the language barrier between the two prevents them communication, but a heated battle commences anyway! Victory!

Sally fights with Ashura, a new wrestler, in order to test her entrance to the AFW. Defeat!

A Best Breast Match against the hellion from Canada, Mazzie Lashley. Defeat!

After her confusing and frustrating battle with Mazzie, Sally goes to a nearby diner to think about her future in the AFW, and meets with a wrestler harboring similar doubts.