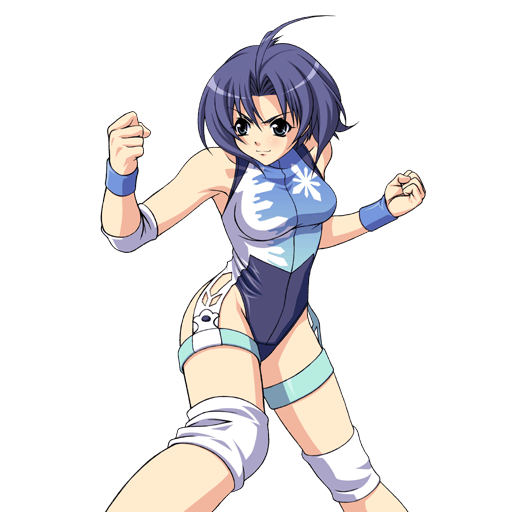 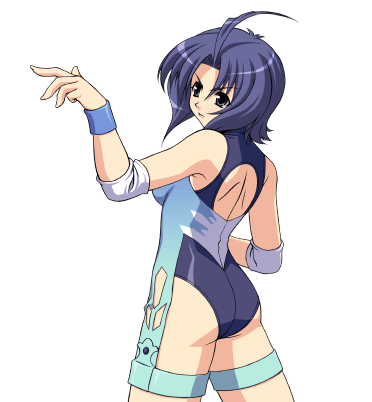 Lucky's personality is as cool as her namesake. She has a mild but friendly temperament and always tries to treat others respectfully outside of the ring. She loves to make friends and although she isn't shy, per se, once she gets her foot int he door with someone, she tends to let them do the driving in the friendship beyond making sure it is well maintained. She's polite and courteous and always tries to be welcoming to those she meets. She is slow to truly anger but every so often, she can get rather annoyed if someone pushes her buttons.

In the ring, Lucky is exactly what you would expect from someone named the Ice Girl. Her face always remains straight and she looks determined and focused. She's hard to read and she drives towards her enemy with purpose. She'll do whatever she can to win, as long as it's mostly within the rules. She's not going to get disqualified but she'll use any advantage she can to get the victory.

Past/History:
Lucky was the daughter of a mildly successful actress and a prominent business man. She grew up with a silver spoon in her mouth and was always used to the finer things in life. Still, she had come from poor roots and her parents made sure to always teach her a sense of humility. She was taught that treating others with respect was the best way for her to earn the respect that she deserved.

With the world as her oyster, Lucky knew at an early age what she wanted to do. Wrestling combined the style  of her mother and the goal setting ladder climbing of her father with an athletic twist that she just found fascinating. One of her mother's friends had been a Sumo wrestler who enjoyed similar sorts of stardom. She knew she could never do that and didn't want to but wrestling was a more appealing alternative.

She used her wealth to train as much as she could but a jet-setting life left her with less time to commit to the sport than she would have liked. When she finished high school she started training seriously but was having trouble getting into a real league. She was good but her name couldn't buy her way into a real wrestling league.

By the time she had gotten into a very small and independent league, she began to date a girl named Alessandra. The girl was a model that she had met through various get togethers she attended with her mother. Alessandra was very striking. Lucky never thought she could fall for a girl but everything just seemed to click with Alessandra. To Lucky, it was magical and even better, Alessandra seemed to be intrigued by and support Lucky's goals of being a wrestler.

Lucky was able to convince Alessandra, who was now quite famous, to help her get into real, albeit small, wrestling federation by being her escort. Lucky had proven her skill set and the flash and notoriety that Alessandra would bring would be a win-win for both Lucky and the league.

Lucky did well, becoming a middleweight champion. By the time she reached success int he small wring, Alessandra was starting to really get into wrestling as well. When Lucky moved to one of the bigger feds at the time, the Wrestle Angel's League, Alessandra went off to join a boxing league, seemingly abandoning her career as a model. Lucky felt great. She was on a roll and was ready to finally earn that trip tot he next level.

Lucky breezed through the fed with her technical skill, able to quickly get consistent midcard fights and the occasional upper card fights. Her next goal was to make main events! But that's when Lucky's luck ran out. Alessandra, who'd taken the ring name Bunny Bomber joined the league. Lucky thought it was great but the federation wanted them to fight. They thought that the reunion (knowing the two were dating) would be something special to sell ratings. Lucky didn't want to. She didn't like the idea of wrestling Bunny for ratings and she secretly didn't want to humiliate her lover on live television.

Lucky quickly decided that the best way to avoid fighting Bunny was to join a tag team. She was put with a feisty midcarder named Macky. The girl was always a good draw because she was a punishing and brutal heel but her skill was never quite at the point where she could achieve upper card or main event status.

The two enjoyed mild success and even earned a few shots at the tag titles but never cashed in any big wins. Lucky wasn't a huge fan of Macky's attitude and Macky thought Lucky was too stuffy int he ring. Though the two were able to form a mutual friendship when they got close, the executives decided to dissolve their tag team and demanded that lucky and Bunny fight or that both of them would be fired.

When the time came, Lucky gave it her all but Bunny somehow managed to pull out the win. It devastated Lucky for many reasons and their relationship formed a deep rift that never managed to repair itself. Bunny quit the federation, Lucky did as well and thought she was done with wrestling. Especially when the Wrestle Angel's League eventually folded as well.

But she could never really leave it. When she saw Bunny pop up, Lucky went back to training. She worked hard and joined small independent feds. Once the ring rust was gone, she began to dominate. She always told herself that she was not going to join the AFW but every match she wrestled, she saw Bunny's face. She couldn't help herself. She wasn't sure if she had feelings for the girl anymore. She'd dated men on and off ever since she broke up with Bunny, never even thinking of going back to women. But there was something. And when Macky also showed up at AFW, along with a plethora of other WA girls, Lucky couldn't resist the pull any more. She honored her contract with the small Fed and then immediately signed on for the AFW the next day.


Attire:
What she wears in the picture.

Fun facts:
-Lucky Uchida is terrified of jellyfish. If someone mentions them she'll get cold chills, but if she ever even SEES them, she'll freak out and throw herself at the nearest person and hug them tightly until they tell her it's all clear.

-Lucky loves rap. Especially hard and nasty rap. She isn't sure why but the uniqueness of it just tickles her fancy. She ins't sure how seriously she takes it and that might be part of the reason why she likes it so much.

-The name of the tag team that Lucky and Macky were in was called The Oni Sisters, despite not being Oni or sisters. The executives wanted to name them the "Juicy Pair" but Uchida would not let it them even though Macky thought it was funny.

- Lucky Uchida was known in the Wrestle Angel's League as one of the "Beautiful Butt Four Devas" because of her beautiful butt. While flattered, she wasn't very happy with being in that group. Macky also thought that was funny.

Wins:
Vs. Abattoir via Submission

Losses:
Vs. Jamie Valentine via Countout 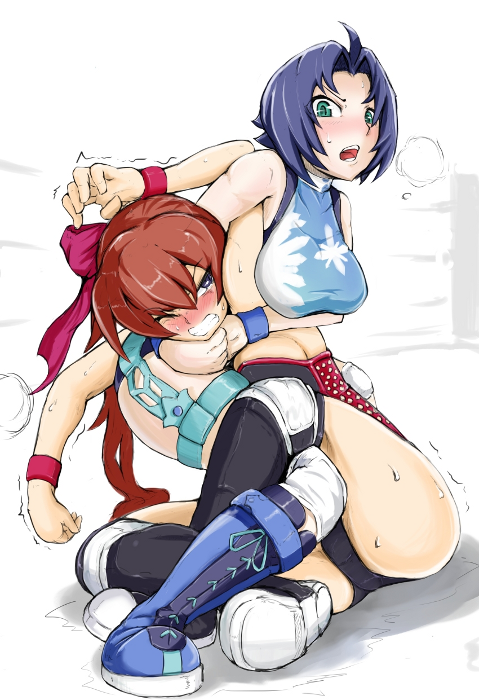 Lucky taking it to Thunder Ryoko! 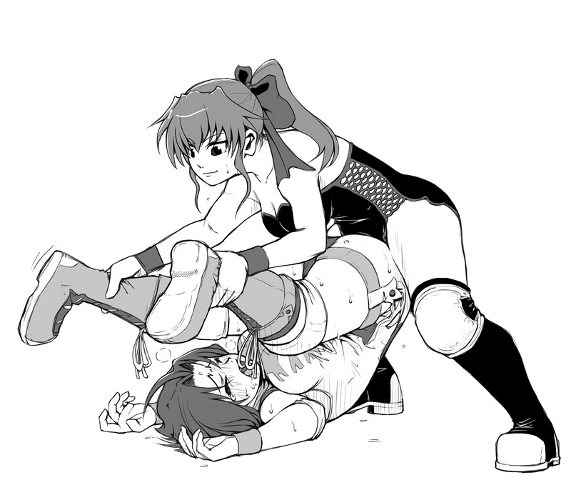 Unfortunately Lucky didn't win that match. She could not over come one of the Wrestle Angel League's biggest superstars and was pinned 1-2-3!