Background
Aoi Hayase was originally a wrestler from the Wrestle Angels league under the name Dolphin Hayase, she came from a very poor family consisting of herself, her mother and father, and her little sister Chi-chan. Aoi did whatever she could to go great lengths to make money to support her family by doing multiple odd jobs and searching for part-time jobs. Ultimately Aoi was able to get a full time career as a wrestler in Wrestle Angels and made lots of money even though she lost a lot at first and made sure to send portions of her paychecks to her family. Even as she wrestled, Aoi still did odd jobs and worked part-time jobs to go the extra mile just in case. Despite originally wrestling only to make money, she eventually came to enjoy the sport and kept having fun even with all the hardships she dealt with. Aoi also developed a great friendship with fellow wrestler Tsubasa Nomura and had a fierce rivalry with Natsuki Makabe whom she had lots of matches with and mostly lost.

All of this changed when Wrestle Angels was forced to shut down. Aoi was left out of a job and the money stopped rolling in high amounts, making her family poor again and she lost contact with Tsubasa. So Aoi continued to keep doing what she usually did to do her best to make just enough money, but wasn't able to. Since then, she felt like she had let her family down, and especially her beloved little sister and was depressed for a long while and couldn't work properly. Even though the AFW was active, Aoi never even heard of it at all until Chi-chan told her about it to try and encourage her older sister to wrestle again. She succeeds and Aoi decides to make a new outfit for the AFW instead of using her old one as a way of restarting her wrestling career anew, and then registers into the Friction league and awaits for her debut match.... and her first paycheck.

Appearance
Aoi is a real cutie with a nice slender figure and average sized bust along with very long blue hair that pasts her knees which she always wears in twintails that go just slightly above her knees. 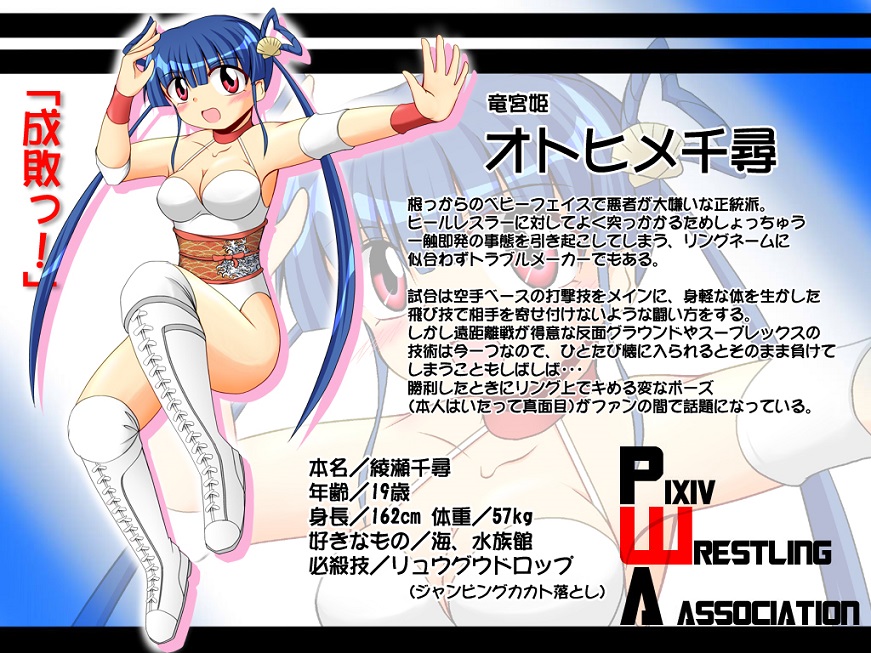 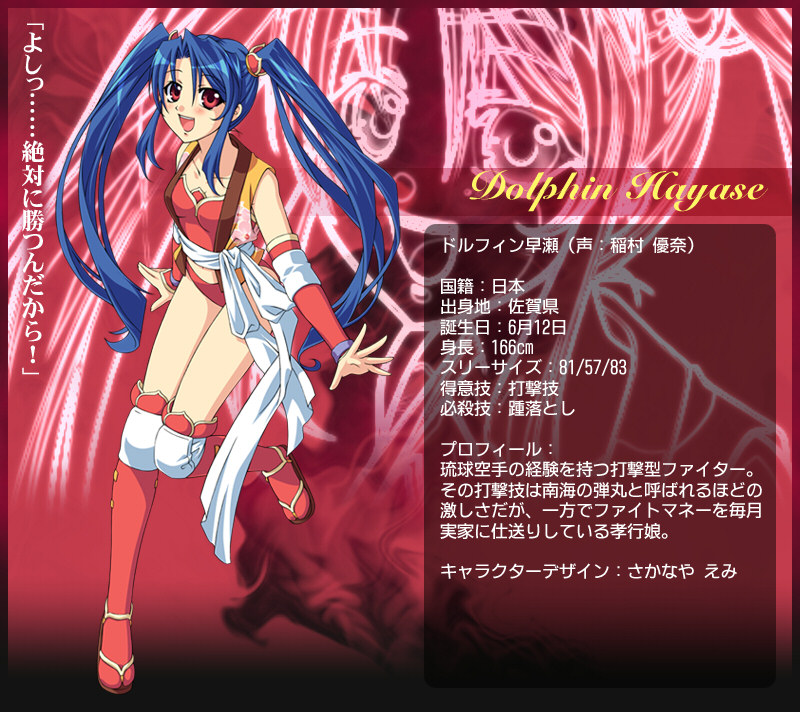 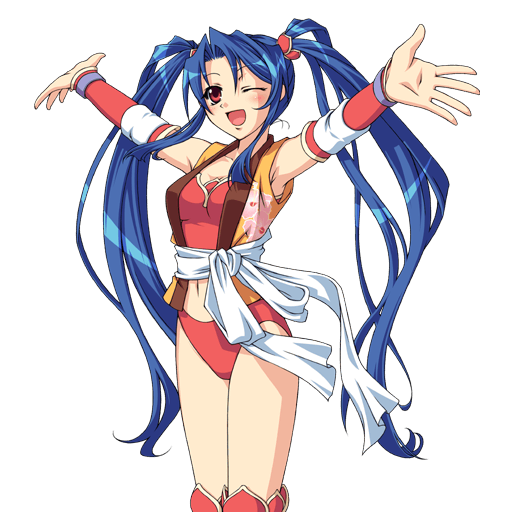 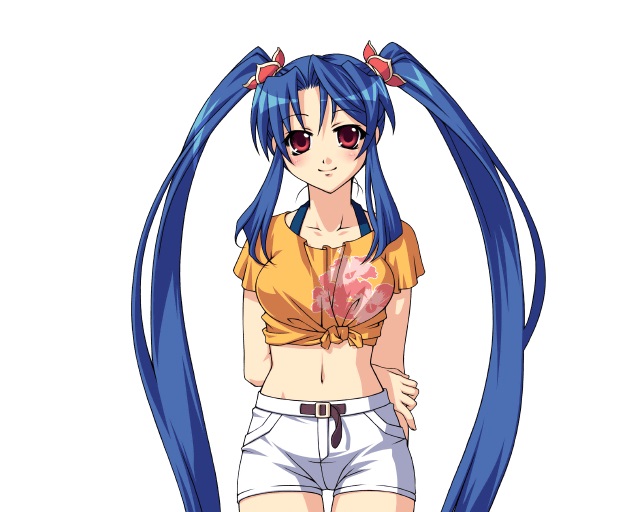 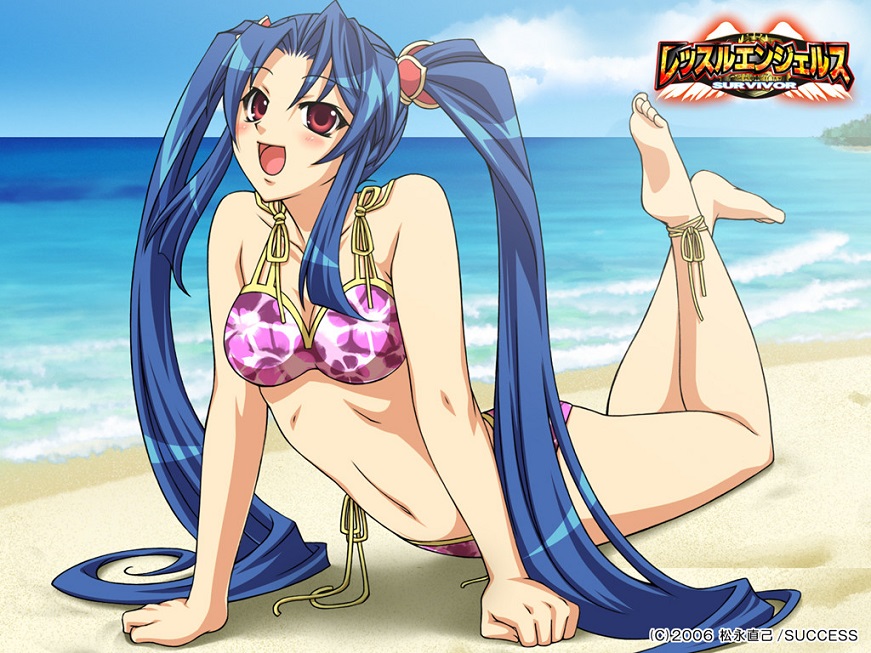 Dolphin at a swimsuit photo shoot for a Wrestle Angels magazine.

Personality
Aoi is a very nice and friendly girl, both in and out of the ring and doesn't think at all she is superior to anyone, even rookies while being a fair sport which makes her very likeable among fans and wrestlers alike. She is also very filial and cares for her family so much and adores her beloved sister Chi-chan, which is what drives her to work hard to earn lots of money for her family.

Other Facts
- She has a slight obsession with money, but isn't at all greedy whatsoever.
- True to her alias, Aoi loves the ocean and all sea creatures as she goes to the beach and aquariums often.
- Although unlike other wrestlers with animal names, she doesn't show any specific trait of the mammal she's named after.

Wrestling Information
Strengths: Dolphin's skills are average and above but her power and strike attacks make her a force to be reckoned with.
Weaknesses: Despite being strong and have good technique, Aoi cannot defend or counter to save her life. Her starting defense against everything other than striking moves leaves a lot to be desired.
Style: Glass Cannon
Difficulty Level: Medium

Wrestling Attire: Dolphin wears a new outfit for her wrestling career in replacement of her old one, she wears a simple pure white one piece with a kimono sash like belt around her waist and abdomen followed by white elbow and knee pads and wrestling boots and an apple red choker and wristbands.

She will wear her old wrestling outfit however whenever she is in a match with a fellow wrestler that came from Wrestle Angels.