» Adventuring David vs Amazonian Goliath: The Rematch
by Mart-Kos Today at 9:22 am

» Canon characters and pics checker
by Scourger X Today at 8:05 am

» Adama Saadia vs Daichi Kurozu - Beguiled
by Scourger X Today at 7:51 am

» Freedom or adoption: Cattleya + M-cup maidens Vs. Ryu & friends
by The Riders Today at 7:41 am

- Are you worried? - Victoria asked, adjusting her glasses.
- Should I, huh? - the blonde grinned.
- I want to remind you that not only your reputation is at stake, but also your pride, - the manager’s eyes narrowed.
- This is a match. And no matter how it ends. The goal is not always important. But the path is always important, - Astrid straightened her swimsuit, looking in the mirror.
- I still do not fully understand your philosophy... - the Englishwoman admitted, taking a deep breath.

Astrid just smiled. Victoria was a wonderful person, albeit a very peculiar one. She always did her job perfectly and as quickly as possible. Only a week has passed since Daisuke interrupted their training. The Englishwoman prepared the documents in just one day and the management agreed on this match in the shortest possible time. According to Victoria, a significant role in this was played by the conditions that the wrestlers set each other, as well as the fact that this will be the debut match of the Golden Dragon in the Tension unit.

- Well, see you, huh, - said the Norwegian girl with a smile.
- Will we see a real golden dragon today? - Victoria asked, while Astrid raised her left eyebrow. - Okay, forget it was too prosaic... just kick his ass and let him know you shouldn't mess with my girls, okay?
- You don't have to ask me, huh, - Astrid stepped out of the locker room with those words.

The Norwegian girl headed for the curtains, thinking about the upcoming match. She never liked to look into the souls of other people, her own was enough for her. But Astrid never fought men in professional sports. Street fights and sparring do not count. And now she was thinking about what makes men take such a fight. From the point of view of the girls, everything was more or less clear, some girls just want to prove that they are not weaker than men. But with the men themselves... it's complicated. Do they want to prove their superiority over girls with their fists? Sounds funny. Or is it just a legal way for them to beat a girl? That sounds believable. Now it remains to find out what type Daisuke belongs to. Astrid stopped in front of the curtains and grinned.

- To the last drop... of oil, - she said, changing her signature words and then hitting her left palm with her right fist. 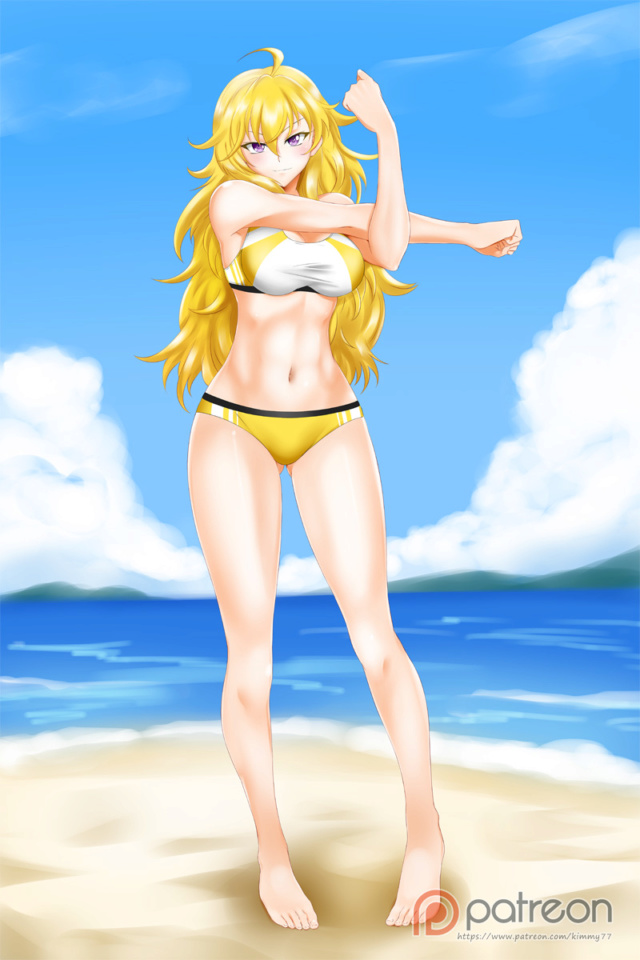 Her dynamic music began and the girl came out from behind the curtains. As always, the Golden Dragon raised both hands above her head, folding her palms in the manner of the crown. The audience greeted her with applause. Today there was a new audience for her, however, there were enough of those who had already seen her matches or at least heard about her. For the short period that Astrid spent in AFW, she already managed to earn a certain reputation. The reputation of a fighter who always goes forward, no matter what.

The girl began to descend the ramp, not forgetting to demonstrate her bathing suit. She had nothing to hide, she was proud of her body. The muscles did not detract from her beauty, so Astrid enjoyed the enthusiastic looks of her fans. The Norwegian girl looked at the ring and once again lay down and smiled. The anticipation of something new overwhelmed her. The long-haired blonde climbed the ramp and slipped between the ropes. Her feet were immersed in oil and trembling passed through the girl's body. It really looked like chocolate, in which she fought with Natasha. The girl raised her hands in greeting, waving to the audience. And when her music was coming to an end, she hit her left palm with her right fist. With the latest applause, the former MMA fighter greeted the referee and headed for her corner. The girl leaned back on it and put her hands on the ropes.

Re: [Oil Match] Astrid Arvidsson (D) vs Daisuke Takeuchi - All Bets Are Off

There was a lot at stake in this match considering it was an oil wrestling match. Most would not take such a competition seriously but not Daisuke and by the looks of his opponent tonight, neither would she. Daisuke was never one to try and use his brute strength to subdue his opponent with the use of punches, kicks and strikes. He was a traditional wrestler and favored grappling and submissions. To him wrestling was a battle of wits and skill just as much as it was of strength. The prince treated fighting and wrestling separately and a match such as oil would be a perfect example to show off his superiority against a woman like Astrid, whom he believed was simply a barbaric fighter and not a wrestler.

He would wait backstage, observing the Norwegian woman make her entrance to the ring. He had to admit, she looked absolutely stunning in her swimsuit attire. Her body was flawless, he could tell she spent countless hours in the gym to keep herself in the condition she currently is in. Daisuke was no slouch either and that would mean this would be a perfect competition to see who truly is the better wrestler.

Putting on a royal rove over his chiseled body, Daisuke would make his way out to the Tension arena to a mix of jeers and cheers. He had a smug grin on his face while making his way down to the modified ring. Upon nearing his destination, he would slowly dis-robe to reveal his scrumptious figure clad in nothing but a pair of CK briefs.

His attention then turned towards Astrid with his feet dipping into the shallow pool of oil that was their wrestling ring. "So, the time has finally come has it? I hope you are prepared to admit that your prince is superior to you in every way, Astrid" he said with a smug grin on his face. He took a moment to adjust his briefs before slowly walking towards her making sure not to slip. He would stop right in front of her face, the crowd could feel the tension was thick between the two.

"I want you to know, this is not a contest to prove men are better than women in the ring or a battle of the sexes. This is simply between you and me, who is the better wrestler between you and me. I would treat you the same way as I would any man who faces me in the ring." he whispered to her before taking a step back and offering his hand to her.

"May the best wrestler win" he said waiting for a response.