» Ishikawa v Juno Sawyer- A Tsunami against a Glacier.
by HighFly Today at 10:23 am

Best of 3 rounds Match, win a round by pinfall or submission.
Double teaming time is extended (about 5-7 posts)

"Oh well, here we go again..." he sighed and waited on his corner for the arrival of his opponent.

Soon the music would change and some easy going beach music would hit. The titan tron would change to the picture of a endless white sand beach, which noises of fun and waves. Two girls would step onto the stage. It was the new debuting tag team of Julie and Jane. The two Australian girls would stand in thin, open summer shirts on top of the stage. Each girl was having a beach ball under their arm.

Clearly visible under their open shirts was that they were wearing thigh yellow bikinis. 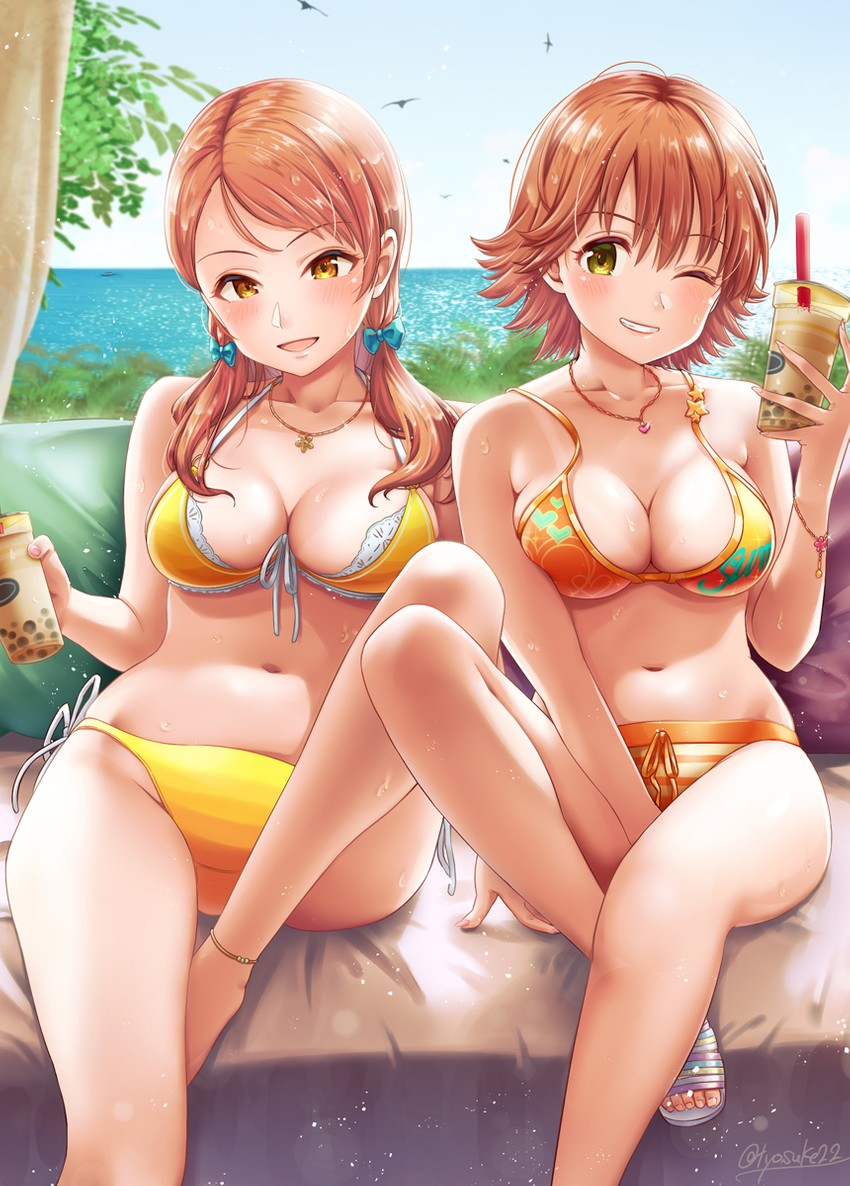 “INTRODUCING, making their AFW debut and brining a combined weight of 235lbs to the ring the Beach queens, Julie and Jane!”
The girls would waive the crowed a bit before Jane would scream out loudly. “who is up to have a good time?”, what was answered with a loud scream of joy from the crowed. The two girls would giggle and then throw their beach balls into each side of the crowed. The crowed would start to toes them around and have a good time. The two bikini girls would giggle before starting to walk forwards down the ramp. They would walk past many cheering new fans before reaching the ring. The two girls would split up and each take different stairs into the ring. When they were on the apron they would stand with their back to the inside and drop their shirt down to the floor, giving the crowed the full view on their bodies. The fans would go crazy.
soon the two would enter the ring by jumping over the top rope, they made a straight line for their opponent coming in from each side. Each girl would grab one of his arms, pressing their bust against his chest and looking into his face. Julie would whisper. “which of us do you want first?”

Yuto kinda thought that his opponents went to a wrong place for a moment. Their clothes and those beach balls, it looked as if they're going to a vacation instead of the match. Then again he had seen people with way weirder gimmick so these girls were actually quite normal in their getups. More importantly, they're both beautiful and the fans reactions showed that. Beach queens, huh, sure looked like one, he smiled wryly while thinking to himself.

He walked away from the corner a bit to prepare himself, but then the girls sized him up from the sides, both taking an arm and pressed it against their lovely busts. Yuto immediately looked rather flustered and blushing lightly.

Jane would jump up into the air a little bit throwing her fist up at the same time. “yaayy” Would she scream out loudly when the boy was picking her over her sister. She would show her sister her toung and tease her while Julie would look shocked at Yuto. “come on really?” She would ask him turning around in the next moment and stomping out of the ring to the corner. Jane would throw the boy a kiss before she would back away from him and go to her corner as well. There she would stretch a little bit trying to get ready. She would put her arm in front of her chest and stretch her shoulders until the bell would ring and finally open the match. She would walk out of her corner towards him her arms up and her body slightly leaned forwards. This only gave him a new perspective on her boobs.

“you know you look a lot cuter with a red face like that, babe!” She would tease him hoping to take him by surpsie. If he would be surpsied by it she would suddenly jump forwards trying to grab his neck and pull him forwards into a side headlock. In the progress she would try to pull his face into his sideboob, not enough to smother him but still give him a teats of what is to come.
_________________
Taking on anyone who wants (m or f) the beachqueens

Obviously the one who didn't get picked will sulk, but Yuto still felt a little bad looking at Julie being upset. He rolled his eyes, then decided that he should focus on the match instead. That was already a difficult thing to do the moment he saw both girls, and what Jane was doing wasn't really helping him in that aspect either. The way the moment blew a kiss to him, or leaning forward to show her boobs more, he couldn't help but to look and get flustered.

"W-wha...?" the taunting made him stopped on his track as he tried to approach Jane, which seemed to be working as intended as the girl would then lunge and pull him into a side headlock! "Nnngh...! H-hey... l-let g-go...!" he protested and began to try prying her arm off, although feeling the side of his head being pressed against her side boob made his effort rather distracted. "D-damn... s-soft..." Yuto muttered as quietly as possible.
_________________
Friction
MIO
Seo

„what?“ would jane ask shocked for a moment. “letting you go?” would the repeat with a big smirk on her face. Pulling him a little bit more forwards until the two were in the dead center of the ring. She would pull his head more into her side, while looking down to him with a smile. “I won´t let my toy go so fast!” She would then suddenly put her hips in front of his body and twisted her upper body as much as she could trying to throw him forwards over herself with a kind of hip throw making them both fall to the ground. She would try to get on top of him right away pressing her breasts into his face smothering him right away trying to keep the headlock in and go for a bigger smother now.
_________________
Taking on anyone who wants (m or f) the beachqueens

"T-toy...! I-I'm n-not..." Yuto tried to protest but he was then slammed to the ground by Jane with the hip toss! "Aah...!" the boy yelped as he crashed down, rendering him vulnerable for a few seconds.

That was all his opponent needed to pin him down, and he got a facefull of her barely covered breasts shoved on his face for his trouble. Yuto let out a few protesting groans while squirming under Jane, trying to push her off him before the smother weakened him too much, but that didn't seem to be working too well for him as it was.

Jane was trying to keep this up for a while but her opponent wasn´t having too much off it. The girl would pull herself down as much as she could feeling him groaning and squirming into her breasts making it feel like he was motorboating her. She was enjoying this a lot. She would throw her head into her neck enjoying the vibrations and the shaking of her breasts, before she was suddenly pushed up and away from him.

She was surprised about how strong he was and when she came back down she would land on her butt shocked for a moment looking over to him. “what how… wow!” she would say with a smile on her face. “impressive! You’re a strong guy! I like it!” She would slowly rise back up form her butt to her feet.
_________________
Taking on anyone who wants (m or f) the beachqueens

Yuto managed to push Jane off him, but he's still left panting for a bit because of the smothering. Sitting on the ground, he took some breather while looking a little flustered and annoyed at his opponent, then began to pick himself up.

"Ugh... caught me by surprise, you sure did... guess I gotta... pay more attention..." he wheezed, before trying to grab her shoulders. Maybe he could try pinning her down to the ground before she could get up since his opponents didn't seem to be stronger than him physically.
_________________
Friction
MIO
Seo

Jane would see her opponent jumping towards her. She would ripe her eyes wide open and couldn´t react in time. Her opponent was able to grab her and push her down to the floor. She would moan out loudly for a bit when he was getting onto of her pushing her down. She would just lay below him for a moment groaning out loudly. She would shake her head for a bit before she would look up to him. “ouch you don´t have to be so mean!” she would tease him looking at him while blowing up her cheeks a little bit.
_________________
Taking on anyone who wants (m or f) the beachqueens