Preferred Matches: Anything where she can test herself, although she finds matches like oil and mud wrestling just odd.

Lock and Load: Grace gets her downed rival in a figure 4 headscissor and elevates her body for more pressure.

The Big Boom: Grace takes her dazed rival and puts their head between her legs, after some threatrics she lifts them up and slams them down in a powerbomb for the pin.

Take Cover: Grace lays on her rival in a full body pin, as if taking cover from enemy fire or a grenade. More often then not she inadvertently ends up with her large breasts smothering the face of her rival.

Physical Appearance: (Without the knife or weapons) 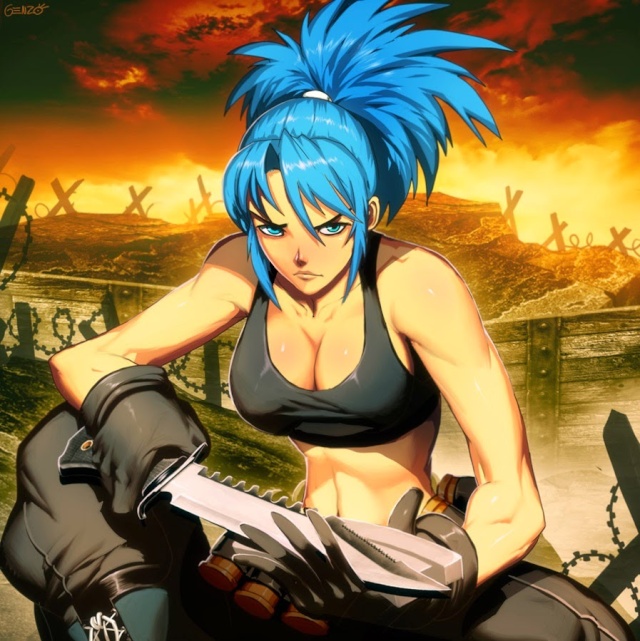 Personality: Grace lives by a strict code of rules and regulations. Grace isnt above doing anything to win, but is not sadistic and never hurts anyone more than she has to. Due to her military life amongst other females, she had developed slight lesbian tendencies and although never open about it, if the right girl pushes her buttons, Grace finds her mental toughness disappear to be replaced by her lust.

She will always respect authority figures, especially those of a military background or official capacity. Can be her downfall sometimes when she comes face to face with dominant girls.


Past/History: Grace spent her youth as a miliatry brat before enlisting. She rose quickly through the ranks and eventually was selected for a special forces unit where she would undertake covert operations. She eventually saw the futility of war and that all soldiers, male and female are alike. Going AWOL she left the unit and escaped to Asia where she became a mercenary gun for hire.

Has a soft spot for anyone in trouble who is facing terrible odds. She doesnt mind if it's someone civilian or military, if she feels the need she will help out. Most likely to be seen in a tag team match or handicap match.


Wrestling Attire: Army Combat Trousers, Black Army Boots and a Vest Top that is cut to just under her breasts

Fun Facts: Has a facination for books and poetry. She reads as much as she can. She lives alone "off grid" away from civilization deep within the Vietnam Jungle.